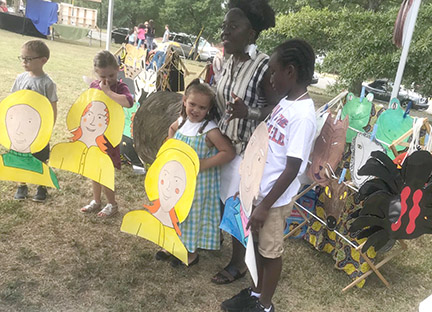 While Arts in Rees Park offered activities and entertainment for all ages, children appeared to be having lots of fun.

AMERICUS — There is a scene from “Ghostbusters” where Ernie Hudson, standing in New York, yells, “I love this town!” Well, that about sums up the feelings for Americus after spending the day, Saturday at Arts in Rees Park
The Americus-Sumter County Arts Council, aka Americus Arts, held its annual Arts in Rees Park, and the weather was perfect; the town showed up, and all had a good time. There was glassblowing by local artisan Devon Cole, Sunni Zemblowski and Ralph Harvey along with ceramists from Georgia Southwestern State University who demonstrated how to make bowls and allowed the public to create their own. Jordan Walker held a painting demonstration as well. Performances were held by storyteller Mama Koku and Picadilly Puppets.
More than one attendee said the music was the best ever at this year’s Arts in Rees Park. The entertainment began with GSW Theatre-staged Medieval Combat. The local bluegrass band, The Pluck Tones, played with some of their biggest hits followed by Tim McDonald and Patrick Cobb who played classic songs from as far back as the ‘50s! The duo had folks dancing across the paths and lawn. Americus Arts board president, Rob Bailey, played with local pastor Randy Saye on drums. The duo played classic rock songs from the ‘60s, ‘70s, and ‘90s. With country, bluegrass, and acoustic rock having echoed through Rees Park, 4 Daze Dead played something refreshing for Arts in the Park! They played hard rock with finesse and conviction!
This year over 30 vendors, artists, and performers set records for Americus Arts. Not only were there numerous art vendors, but guests in the park were able to visit with law enforcement, fire fighters, register to vote, talk with the humane society, do crafts with Kiwanis, get their faces painted, and purchase many woodworking projects.
Food vendors this year included some multi-year returnees such as Pat’s Place and Rudy’s Happy Patch. Folks visiting were also able to purchase seafood this year from Big Willy’s Seafood, cupcakes from Rolling Rosie Small Cakes, and get a snow cone from Americus Snowball & Snow Cone.
The gorgeous weather was met with over 500 people! Occasionally, a light breeze came through and just after noon some cloud cover assisted in keeping the temperatures down. Prior to the event, and within the first few hours, local WISK and WDEC radio deejay Thurston Clary was able to stop by and interview Americus Arts board members live as well as a few performers.
Americus Arts board members constantly roamed the park including event chairs, Brooks Nettum (a former Americus Arts president) and Phyllis Smith. Nettum and Smith were assisted at the event by fellow board members Anne Thomas (who has chaired the event for numerous years), Jean Daniel (treasurer), Cate Bailey (secretary), Jeff Williams, Brita Hobbs, and Rob Bailey (president). The board wishes to acknowledge the additional help of GSW Enactus, GSW Art Department, and former board member Kerstin Cherrbboneau.
Americus-Sumter South High School as well as Southland Academy had wonderful art displays of student work. The annual chalk art contest was won by an individual winner, Wendy Clayton, and a group winner, Nancy Spice and her mentees.
Americus Arts is grateful for the support and diligence of the Americus Police Department. Multiple officers worked tirelessly by assisting with traffic, security (which began the night before the event) and interacting with those working the event and visiting. Having traffic flow all the way down Elm Street this year allowed more to attend and see what was going on. The Sumter County Sheriff’s Office and deputies educated event guests on the dangers of driving under the influence.
Americus and Sumter County is home to a great number of artists, artisans, and craftsmen.
Americus Arts hopes the community was able to embrace more art and possibly discover something they enjoy in the world of art and in themselves. One woman who began painting this year was ecstatic when she sold two paintings. Children had their faces painted, the voices raised in laughter at the storytelling and the puppet show. Children were full of pride after having made a bowl with the ceramists.
Each year Americus Arts is proud to put on Arts in Rees Park for the public. The organization spends thousands of dollars to promote art in the community. It is its purpose. Historically, after everything else man creates in the world, after countries and kingdoms rise and fall — art is what remains.
And while some individuals spend a lifetime expressing themselves through art, and others may not start painting or playing an instrument until they retire, everyone can partake in art, even as spectators, and find joy.
Americus Arts has several upcoming events which are listed in this newspaper’s Town Crier. Visit Facebook at Americus Arts and on the web at www.americusarts.com.