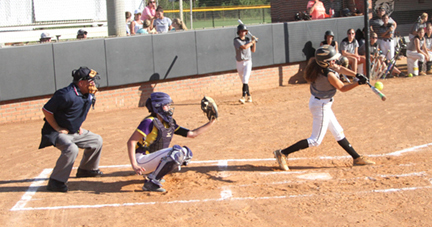 Schley County shortstop Carmen Phillips wenmt 2-for-4 at the plate. She scored two runs and drove in an RBI in the 11-6 loss to Mount de Sales Academy. ATR ARchive

Schley County got off to a good start by scoring three runs in the top of the first inning. Alexis Bradshaw reached on an error to lead off the game. Bradshaw then stole second and reached third base on a passed ball. Shortstop Carmen Phillips then reached on a bunt single, scoring Bradshaw to give Schley County a 1-0 lead. Emily Campbell belted a triple into left field, scoring Phillips to give the Lady Wildcats a 2-0 lead. After Nyiah Kelley struck out, Saige Whaley drew a walk. The Lady Wildcats had runners at first and third with one out. Kelli Rees came in as a courtesy runner for Whaley. Campbell scored on a passed ball, but Rees was thrown out trying to steal third base. Perri DeVane grounded out to end the inning, but the Lady Wildcats took a 3-0 lead.

The Lady Cavaliers got one run in the bottom of the first. With a runner at second and one out, Jordyn Partain singled to center field, driving in Henderson Hurdle to put the Lady Cavaliers on the board. Schley County scored their fourth run in the top of the third inning. Bradshaw reached on a bunt single to lead off the inning. She then stole second and advanced to third on a fielder’s choice by Phillips. Emily Campbell then grounded into a fielder’s choice, scoring Campbell to put Schley County up 4-1.

However, Mount de Sales struck for two runs in the bottom of the third. With one out, Chloe Nepveux singled to left field. Isabel Blackwell was brought in as a courtesy runner to run for Nepveux. Sarah Hatcher then singled, advancing Blackwell to second. Kathleen Carpenter was brought in to run for Hatcher. Caroline Allman then singled to left field to load the bases for Emma Carter. Carter reached on an error by Phillips, allowing both Blackwell and Carpenter to score. Fortunately for Schley County, they were able to get out of the inning without any further damage.

Mount de Sales added one more run in the bottom of the sixth, putting Schley County behind 11-5. The Lady Wildcats tried to make a comeback in the top of the seventh. Carmen Phillips led off the inning with a single. Emily Campbell struck out for the first out of the inning. Phillips stole second base, but Nyiah Kelley popped out to the pitcher. Saige Whaley was able to draw a walk and Perri DeVane singled, scoring Phillips to keep hope alive for Schley County. Whaley advanced to third on DeVane’s RBI single. However, Jade Sellars grounded out to first to end the game.

Carmen Phillips went 2-for-4 at the plate. She scored two runs and drove in one. Alexis Bradshaw went 1-for-4 and scored two runs. Saige Whaley was the starting pitcher for Schley County. She pitched a little over three innings. Whaley gave up 10 runs on 11 hits. Seven of those runs were earned. She walked four and struck out three. Schley County scored six runs on seven hits, but committed five errors. Those errors proved to be costly.

As for Mount de Sales, they were led offensively by Henderson Hurdle. Hurdle went 3-for-4 at the plate. She scored two runs and drove in one. Jordyn Partain went 2-for-4 with a run scored and two RBIs.

Chloe Nepveux was the starting pitcher for the Lady Cavaliers. Nepveux pitched four innings. She gave up five runs on five hits. Two of those runs were earned. She walked one and struck out five. Jordyn Partain came on in relief of Nepveux. Partain pitched the last three innings, giving up one run on two hits. She walked three and struck out two.