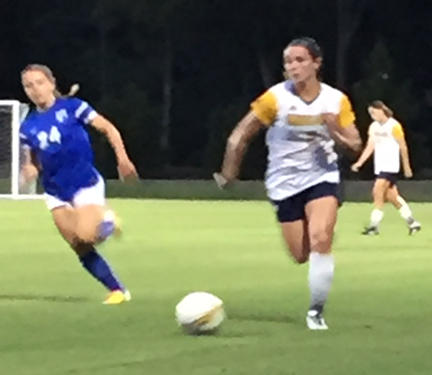 GSW senior forward Ella Hawkins scored the lone goal for the Lady Hurricanes in their 7-1 loss to North Georgia. Photo by Ken Gustafson

UNG’s Renee VanHorn scored one minute into the match when she took a cross into the box from a teammate and tapped the ball past GSW goalkeeper Hannah Morrone to give the Lady Nighthawks an early 1-0 lead. 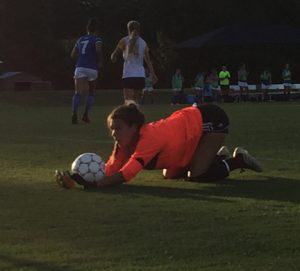 In the sixth minute, Rosie Embley scored for UNG to give the Lady Nighthawks a 2-0 lead. However, in the 14th minute, the Lady Hurricanes struck back when senior Ella Hawkins took a shot that sailed out of the reach of the UNG goalkeeper and into the back of the net to put GSW back in the game. The Lady Hurricanes only trailed 2-1 at that point.

Unfortunately, the positive momentum from Hawkins’ goal was short-lived. North Georgia’s Meredith Tucker received a cross into the box and headed the ball past Morrone and into the left corner of the net to put the Lady Nighthawks up 3-1. Two of the first three goals by North Georgia were scored off of crosses into the box. North Georgia added another goal with 3:05 to go before halftime when Abbie Crane scored to make it 4-1. The Lady Hurricanes’ back line was under constant pressure during the first half. GSW goalkeeper Hannah Morrone was forced to come up with several saves to try to keep GSW in the game. North Georgia dominated the run-of-play (possession of the ball) and created more chances to score. 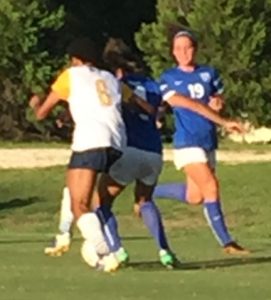 Five minutes into the second half, VanHorn scored her second goal of the game to make it 5-1 UNG. Then with 27:55 to go in the match, UNG added another goal. This one was scored by Haleigh Elmore. The Lady Hurricanes nearly got their second goal of the match when Brianna Mendonca’s shot hit the crossbar. However, North Georgia got one more goal before the end of the match as Michaela Sundstrom scored with just under 18 minutes left to round out the scoring for the Lady Nighthawks.

“It was better than last year,” GSW Head Coach Enrique Rodriguez said. “Last year, we went over there and it was 10-0. We didn’t have a chance. Every year, we’re getting closer. We need to stay focused and stay in the game as long as we can because if we blink, they make it and they make us pay.” 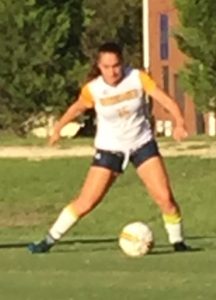 GSW freshman forward Eduarda Giusti with the ball trying to clear it out of the GSW end of the field.
Photo by Ken Gustafson

In spite of Wednesday’s outcome, GSW junior midfielder Michelle Gustavsen believes the team can pull out a win if everybody puts in the maximum effort needed. “We all put in a lot of effort,” Gustavsen said. “If we put in that same effort, we can pull out a win.”

Along with Hawkins, Alisa Barr, Alison Rugel and Leila Hamed had two shots each for the Lady Hurricanes. GSW was outshot 32-9 by the Lady Nighthawks. UNG also had 17 shots on goal to GSW’s five.

With the loss, the Lady Hurricanes fall to 2-6 overall and 0-3 in the Peach Belt Conference. North Georgia improves to 6-1 overall and 3-0 in the PBC.

GSW will try to earn their first PBC win when they host Francis Marion University on Saturday, September 29. Kickoff is scheduled for 5:30 p.m. Francis Marion is 2-5 overall and 0-3 in the Peach Belt Conference.