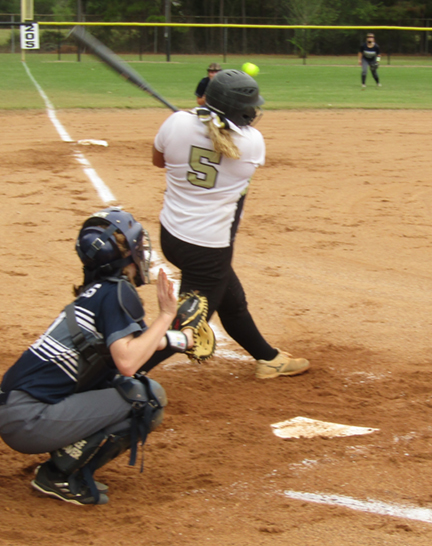 Southland catcher Sara Beth Storey went 2-for-4 at the plate against Brookwood. She doubled twice, scored three runs and drove in an RBI. Photo by Ken Gustafson

AMERICUS – The Southland Academy Lady Raiders softball team got off to a slow start in the first inning. However, they exploded for 10 runs in the bottom of the fourth inning to route the Brookwood Lady Warriors 14-4 on Thursday, September 27, at Southland Academy.

The win ensures that the Lady Raiders (13-7, 5-1) will play Valwood on Tuesday, October 2, in a one-game playoff to decide first and second place in GISA Region 3-AAA. Southland has already secured a spot in the Georgia Independent School Association (GISA) Class AAA State Playoffs.

Alli Dent was the starting pitcher for Southland Academy. She was pitching in place of Rylan Youngdale, who was sick. “Alli did a great job. She hasn’t pitched in a little over two weeks,” Southland Head Coach Rusty Tondee said. “We’ve been able to play two games a week…just Tuesdays and Thursdays, so that allowed Rylan to pitch both of the games. It has been about two weeks and Alli found her groove. That first inning was a little rough on her, but she came back. She’s a tough girl. She plays tough and she found her groove. She kept them (Brookwood) right there at four and gave us a chance to come back. We finally started hitting the ball in the later innings and we were able to pull it out.” 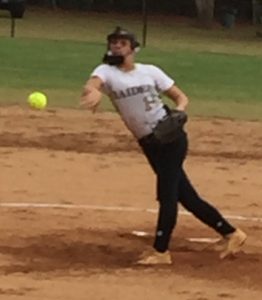 The top of the first inning is where Dent and the Lady Raiders were slow coming out of the gate. The Lady Warriors scored four runs. Dent struggled to find the strike zone, walking two batters in that inning. However, she was able to find her rhythm the rest of the way. After the first inning, Dent only walked two batters and struck out three. She had four strikeouts for the game.

In the bottom of the first inning, Sara Beth Storey doubled with two outs. Brookland Weaver then reached on an error when she hit a fly ball to the Brookwood left fielder, who dropped the ball. This allowed Southland’s first run to score.

In the bottom of the third inning, the Lady Raiders scored two more runs to get to within one run of Brookwood at 4-3. Holly McCain led off with a single, followed by an RBI double by Storey, scoring McCain. Storey then scored on a sacrifice fly by Weaver.

The big inning for the Lady Raiders was the fourth inning. They scored 10 runs on five hits and took advantage of three Brookwood errors, two hit batsmen, three walks, a wild pitch and a couple of passed balls. Katie Rogers and Morgan Minick both doubled in this inning. Alli Dent and Hannah Mitchell each had an RBI single in the inning, and Holly McCain singled and drove in an RBI when she was hit by a pitch.

McCain went 2-for-3 with two singles, scored two runs and drove in a run when she was hit by a pitch in the fourth. Sara Beth Storey went 2-for-4 at the plate with two doubles. She scored three runs and drove in an RBI. Alli Dent went 1-for-3 with an RBI single, a walk and also scored a run. Katie Rogers went 2-for-3 with a single, a double and scored a run. Morgan Minick got on base all three at bats. She walked twice, doubled and scored two runs.

Alli Dent, who started in the circle in place of Rylan Youngdale, got the win for the Lady Raiders. She gave up four runs on five hits. She walked four and struck out four.

For Brookwood, Kendall Boggs went 2-for-2 with two singles and drew a walk.