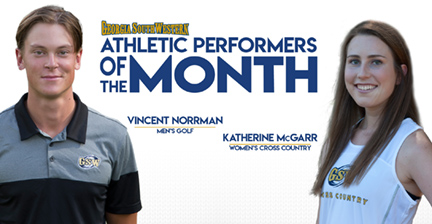 GSW Men’s golfer Vincent Normand and GSW Women’s cross country runner Katherine McGarr have been named GSW Athletic Performers of the Month for the month of September. Photo by GSW

Norman, a junior from Stockholm, Sweden, finished in third place at the Cougar Invitational presented by AFLAC. Norman shot a 6-under par 207 in the three rounds played Monday and Tuesday, September 24 and 25. He shot the round of the tournament with a 5-under 66 in the final round, which is the second-lowest round in the Peach Belt Conference this season. Norman finished one stroke out of a tie for first place in the 17-team, 90-golfer field. Norman broke the 54-hole GSW record of 209 and was named the first Peach Belt Conference Golfer of the Week for the 2018-19 season. Norman is a Business Management major.

Katherine McGarr, a senior from Cordele, GA, led the Lady Hurricanes cross country team in both races to open the 2018 season. Her time of 21:24.16 at the Jaguar XC Invitational on Saturday, September 22, was good for 33rd place out of 79 participants. McGarr is an Exercise Science major.

GSW coaches nominate student-athletes and vote for the recipients of the award each month.

By Staff Reports   AMERICUS – It has been a struggle for the 2018 Georgia Southwestern State University men’s soccer... read more