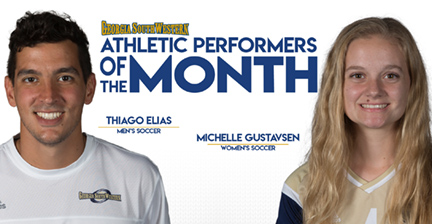 Elias, a senior on the GSW men’s soccer team, turned in a three-goal performance in the Hurricanes’ 8-1 victory over Shaw University on Wednesday, October 3. The Sao Paulo, Brazil achieved the first hat trick in GSW men’s soccer history. Elias will graduate from GSW with a degree in Business Management.

Michelle Gustavsen is a junior from Hiram, GA. Gustavsen anchored the Georgia Southwestern Lady Hurricanes’ defense during the 2018 season and didn’t come off the pitch for a sub until she was injured during the final match of the season. Gustavsen added an assist in GSW’s 3-1 win over Albany State on Wednesday, October 24. It was the first assist of her career. Gustavsen is currently a nursing major.