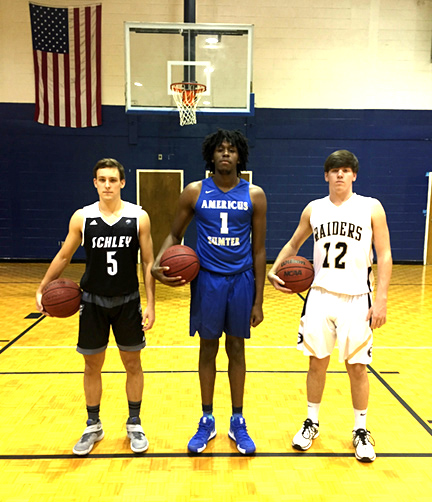 Schley County’s Noah Hammons (left), Americus-Sumter’s Joshua Lusane (middle) and Southland Academy’s Chandler Studdard (right) are expected to provide strong leadership for their teams and to lead their respective squads to successful campaigns during the 2018-19 season. Photo by Ken Gustafson

AMERICUS – Both the Americus-Sumter and Southland Academy boys’ basketball squads had very successful seasons during their 2017-18 campaigns and are looking to soar to even greater heights in the 2018-19 season. While Schley County wasn’t quite as successful, the Wildcats are also looking to have a much better campaign in 2018-19. We will now take a more in-depth look at each program, and their expectations for the upcoming season.

The Americus-Sumter High School boys’ basketball team had one of the most successful seasons in school history in 2017-18. The Panthers went 25-4 overall and won the Region 1-AAAA regular season title.

The Panthers lost a heartbreaking 60-59 game to Baldwin in last year’s GHSA Class AAAA state tournament. They lost their point guard and team leader, Eric Hall, to graduation. Hall averaged 15.6 points per game and 5.3 assists per game for the Panthers in 2017-18. He will be playing basketball across the way at Georgia Southwestern State University this year. Other notable seniors who have graduated include Kobe Lewis, who is at Central Michigan on a football scholarship, Elliz Knighton, who is a student at Fort Valley State, and Sh’Qual White. According to Panthers Head Coach Michael Hoffpauir, White is believed to have joined the military.

However, that was last year, and Hoffpauir is focusing on the 2018-19 season. The Panthers will have most of their core group back, including senior small forward/shooting guard Joshua Lusane. Lusane was a co-captain along with Hall and White on last year’s team. Also returning for the Panthers is junior shooting guard Trae Brown, junior point guard A’Jarrien Banks, and senior small forward Michael Flemming. Center Joshua Moore will also be back for his senior season.

Seniors David Sumlin, Sam Crumbley, Jacoby McCuller and brothers Quevolia and Kanova Willoughby will also join the team once football season is over.

As far as playing style is concerned, the Panthers plan to do pretty much the same thing as they did a year ago as far as offense is concerned. “We’re going to do something a little different defensively,” Hoffpauir said. “Due to the structure of our league, everybody tries to spread the basketball, but defensively, we’re going to do something different in the half-court set.” Hoffpauir went on to say that he believes his squad will be a little deeper than they were last year. “I’ve always played a deep bench. Two years ago, we played 10 players. We ran units of five. We subbed five in and five out. We did that pretty much all year long,” Hoffpauir said. “I think this year, we’re going to be very capable of doing that again.”

As far as leadership for the upcoming season is concerned, Hoffpauir expects to name Joshua Lusane, Trae Brown and David Sumlin to serve as captains for the team. However, Hoffpauir expects Lusane to take the ultimate mantle of leadership of the team. “Lusane fits that mold right now,” Hoffpauir said. “I think Trae Brown has the potential. He’s moving up and speaking up a lot more and he’s a certified leader on the team.” However, Hoffpauir went on to say that the kids look up to Lusane, as does the program and the community. Lusane averaged 15.2 points per game and 7.9 rebounds per game during the 2017-18 season. “One of the things I’m trying to do is to bring more of that leadership out of him,” Hoffpauir said. “He’s a big step for our program and a tremendous asset. He is stepping into that role and is showing that he wants to be the guy. This past Summer, he showed that he wants to be the team leader.”

The Panthers will have a scrimmage game on Tuesday, November 13, against Lowndes County at home at 6:30 p.m. Their first regular season game will be Saturday, November 24, at home against Lee County. Tip-off is scheduled for 7:30 p.m.

The Southland Academy Raiders had one of their best seasons in school history last season. They went 17-5 on the season and reached the second round of the GISA Class AAA State Tournament before losing to Holy Spirit Prep. The Raiders lost a lot when Siage Batten graduated. Batten was All-State a year ago, averaging 21 points per game and six rebounds per game. Batten also set the school record with 153 free throws made. He signed a scholarship to play at Brewton-Parker College this past Summer. Harrison Bell will be missed as well. Bell, who will be playing baseball at the University of South Carolina-Beaufort, had 106 career three-pointers made at Southland. Bell made All-State his junior and senior year, and tied the school record with seven three-pointers made in a game. Alex Roach, who played a key role in the Raiders’ success a year ago, will also not be back. His contribution to the team will be missed as well.

As of right now, Foster thinks that maybe two starters from last year’s team will return, but he is really only sure of one that will be returning. “Chandler Studdard is the main one who is coming back. I know he’s coming back for sure,” Foster said. “I think we are probably going to lose the other one, so we are probably losing four starters off of last year’s team.”

Parker Weldon, who is a key contributor on the Southland football team, played basketball last year, but  Foster is not sure he will play this year because of his knee. “He’s also trying to get some football scholarships. It’s still up in the air as to whether or not he will play,” Foster said.

Clay Owens, a running back on the football team, was also a member of the Raider basketball team last year. However, like Weldon, he is in the same situation. “I haven’t heard for sure on those two (Weldon and Owens),” Foster said. “We have to give them some time. They’re in football right now. I’m not going to push it. I’ll find out soon enough.”

With the loss of so many key contributors and leaders from last year’s squad, Foster believes that it will be a little bit of a rebuilding year, but he is not overly concerned. “I think there is a lot of parity in the region,” Foster said. “Some teams have lost just as much as we have. I think we will still be competitive. I don’t know that we’ll be the favorite, but we will still be competitive and I think we will surprise some people.” Foster is encouraged about the sophomore class that will represent the team. His son, Max Foster, will be playing, as will Nathan Duke and Owen Exley. “Those three are going to help us on the varsity level,” Foster said.

In addition to Max Foster, Nathan Duke and Owen Exley, Foster is hoping that James Griffin will join the team as well.

As far as freshmen are concerned, Foster plans to have all of the freshman play on the B team. “I’ve got five freshmen playing B team,” Foster said. “I will have to bring up some eighth graders to help them as well. We have 16 players from grades 9-12 signed up, but that number could change. It could go size 20 or it could go as low as 13, somewhere in that range. It all depends.”

Foster will have four seniors on the squad this year who will be expected to contribute and provide leadership to a relatively young squad: Chandler Studdard, Gabe Roland, Bennett Carey and Owen Hufstetler. “Studdard is probably going to be our captain,” Foster said.

Right now, the Southland boys’ basketball team is in a state of flux due to the fact that so many of their players are playing football. Once football season is over, however, the players who will be joining the basketball team will be able to devote their full attention to basketball. The Raiders might not have quite the success they did last year. Then again, they might. That remains to be seen. What is certain is that Southland will be competitive in boys’ basketball during the 2018-19 season.

The Wildcats had a mediocre season last year, going 12-14 for the 2017-18 campaign. However, Head Coach Ernest Scott believes that his returning starters, Jamyron Clayton, Zykevious Walker and Jordan Taylor, should have even better seasons than they did a year ago, which will hopefully lead the Wildcats to better results this season. Right now, the Wildcats are in the same situation Southland is in. Many of the players who are on the basketball team are also key contributors on the Schley County Football Team as well. The football team will host a playoff game on Friday night, November 16, against Trion. How far the Wildcat football team goes in the state playoffs will determine when these players will be able to join the Wildcat basketball team.

Noah Hammons, Tra Sampson, Zamon Ross and Ashton Goodin will also be expected to be key contributors. Ross and Sampson are two of the best offensive players on the football team, so Coach Scott will have to wait till football season is over for their services.

The key newcomers for the Wildcats will be Deontae Cross, Dylan Taylor and Jaquavious Pitts.

Jordan Taylor has shown that he is a prolific outside shooter and can hit shots from beyond the arc. Zykevious Walker, who is a highly-recruited football player, has shown himself to be a solid post player on the hardwood. The Wildcats will need Walker’s rebounding and scoring on the inside. The seniors on the squad will have to step up and provide leadership for the Wildcats to be successful.

The Wildcats will begin play on Tuesday, November 27, at Chattahoochee County. If football is still going on by then, that game will be rescheduled. Once football season ends, the Wildcats will have more depth that they can rely on.