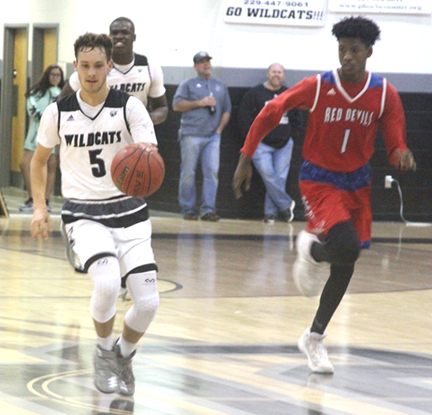 Schley County guard Noah Hammons in a game a year ago against Hawkinsville. Hammons scored seven points in the loss to Chattahoochee County. Submitted Photo

In spite of the loss, Schley County Head Coach Ernest Scott was pleased with his team’s effort.  “I thought we gave a great effort,” Scott said. “I had six players that didn’t play and three of which were starters. I had kids still banged up from football. I played seven players. We play at home on Friday and Saturday so I should have more guys dressing out.”

With many of the players on the team having just concluded their football season a week ago, the transition from football to basketball, especially for those players who were banged up, was a difficult one to make so soon.

The Wildcats got off to a good start in the first quarter and took a 15-11 lead by the end of the quarter. The second quarter was a low-scoring, evenly-matched period with the Panthers outscoring the Wildcats 9-8. However, SC went into halftime leading 23-20.

The Wildcats had two players in double-figures. Jordan Taylor led SC in scoring with 14 points and Jamyron Clayton scored 11. Noah Hammons and Ashton Goodin each had seven points. Dylan Taylor scored six and both Tra Sampson and Jackson Fulks each scored a basket to round out the scoring.

The Panthers had three players in double-figures. De’andre Masten led all scorers with 23 points. Andre De’Shong scored 11 and Devante Palmer chipped in 10.

Up next for Schley County is a home game against Pataula Charter Academy on Friday, November 30. Tip-off for that game is scheduled for 7:30 p.m. The Wildcats will then play their first Region 4-1A game at home on Saturday, December 1, against Crawford County. Tip-off is scheduled for 1:30 p.m.

Panthers take care of business against Dougherty in region opener