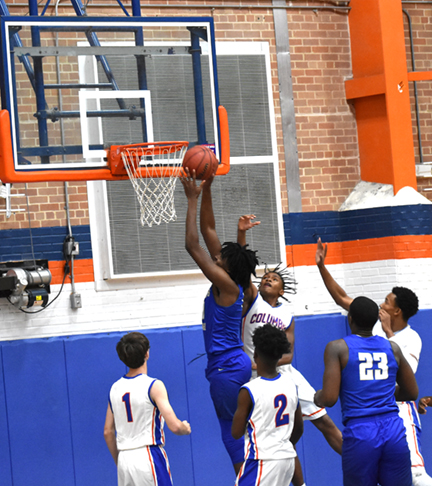 Joshua Lusane takes the ball up for a basket against the Blue Devils. Lusane scored 20 points to lead ASHS to victory. Photo by Coleman Price

Lusane scores 20 to lead Panthers in lopsided win over Columbus

COLUMBUS, GA – ASHS shooting guard Joshua Lusane scored 20 points to lead the ASHS Panthers (5-0, 2-0) to a lopsided 81-37 Region 1-AAAA win over the Blue Devils of Columbus High. The Panthers had two other players in double-figures. Trae Brown scored 13 points, six of them came off of three-pointers. Joshua Moore scored 11 points for the Panthers. Jakobe McCuller and Sam Crumbley each had six points in the winning cause. Jakontist Gordon, Kanova Willoughby and Quevoluia Willoughby each scored four points. David Sumlin scored three points on a three-pointer in the first quarter. Melton McCoy, Wallace Bradley, Michael Flemming and Eric Aldridge each scored two points to round out the scoring for the Panthers.

With the loss, Columbus drops to 0-6 on the season. Up next for the Panthers is a home game against non-region opponent Crisp County (1-4) on Friday, December 7, at 7:30 p.m. They go back into region play on Saturday, December 8, when they travel down to Albany to take on the Trojans of Dougherty. Tip-off for that game is scheduled for 7:30 p.m. The following Tuesday, December 11, the Panthers will travel back to Columbus for another Region 1-AAAA game against Northside (Columbus). Tip-off for that game is scheduled for 6 p.m.