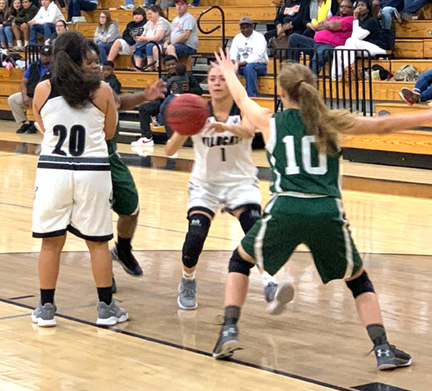 ELLAVILLE – The Schley County Lady Wildcat basketball program has had some talented players and teams over the years. In spite of that, however, there was one thing the team had never done before. That is, until Tuesday night, December 4, when the Lady Wildcats defeated Taylor County for the first time in school history. They did it in dominating fashion by the score of 70-20. Before Tuesday night’s Region 4-1A tilt between the two schools, Taylor County was 16-0 lifetime against the Lady Wildcats.

Carmen Phillips had a tremendous night for Schley County. She led the Lady Wildcats in scoring 32 points. Dasani Minter posted a double-double. She scored 20 points and grabbed 11 rebounds.

The Lady Wildcats are still undefeated on the season. They are 4-0 overall and 2-0 in region play

As for the boys, things didn’t go as well. The Wildcats fell to Taylor County 70-50 on Tuesday, December 4. “It was a bad shooting night,” Schley County Head Coach Ernest Scott said. “We shot 15 for 55 from the floor and missed 17 free throws. We also committed 23 turnovers.”

The first quarter was an evenly-played quarter, with the Wildcats owning a 17-16 lead by the end of the quarter. However, the Vikings took over in the second quarter, outscoring the Wildcats 22-9 to take a 38-26 halftime lead. The Vikings outscored the Wildcats 19-10 in the third quarter. From then on, the Wildcats were unable to cut into the Vikings’ lead and lost 70-50. Schley County falls to 2-2 overall and 1-1 in Region 4-1A play. Both the Schley County boys’ and girls’ teams will be hosting St. Anne-Pacelli on Friday, December 7. The Lady Wildcats will be trying to stay undefeated, while the Wildcats will try to rebound from the 20-point defeat at the hands of Taylor County. The girls will tip-off at 6 p.m., followed by the boys at 7:30 p.m.