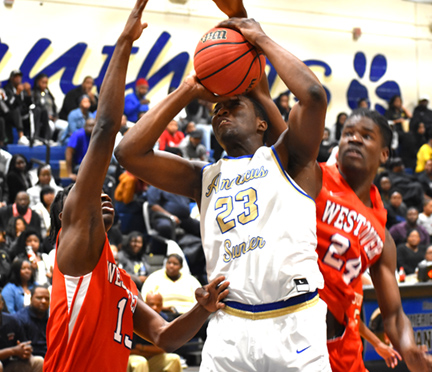 AMERICUS – After a lackluster performance in their 72-67 loss at Carver (Columbus) on Friday, January 11, the Panthers (13-2, 7-2) rebounded and fought through 32 minutes of basketball and beyond to earn a hard-fought 79-77 overtime win over Westover Saturday evening, January 12, at Americus-Sumter High School (ASHS).

Junior shooting guard Trae Brown led the Panthers in scoring with 22 points and hit two three-pointers in the game. Brown also went 6-of-9 from the foul line, tallied three steals and dished out three assists in the Panthers’ win. Senior forward Joshua Lusane posted a double-double against the Patriots. Lusane scored 17 points and pulled down 10 rebounds. Lusane also got it done on the defensive end as well. He tallied five steals and dished out two assists. 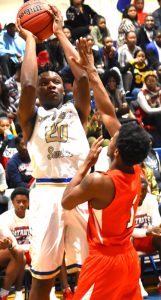 ASHS senior guard Michael Flemming goes up for a shot against Westover.
Photo by Ken Gustafson

The Panthers jumped out to a 21-16 lead by the end of the first quarter. Both teams went back and forth in the second quarter, with the Panthers edging out Westover 15-13 to take a 36-29 halftime lead. 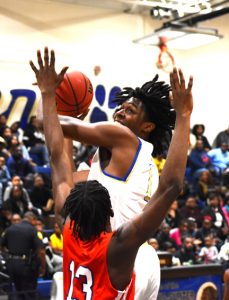 In the overtime period, ASHS was able to outscore Westover 10-8 to take the hard-earned victory. With the win, the Panthers are currently in second place at 7-2 in the Region 1-AAAA standings. They trail Carver (Columbus), who sits at the top with an undefeated region record of 9-0.

The Panthers will try to keep pace with the Tigers when they continue region play at Shaw in Columbus on Tuesday, January 15. Tip-off is scheduled for 7:30 p.m.