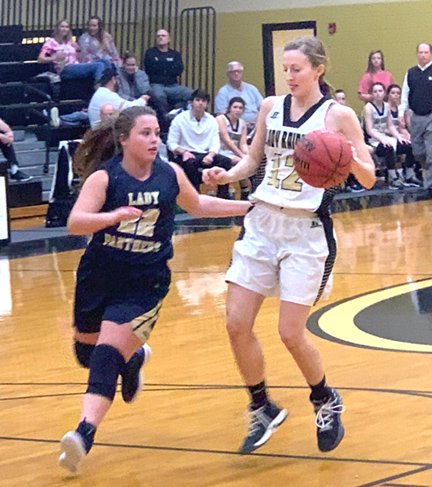 Southland Academy senior point guard Sydney Payne leads the Lady Raider offense against Tiftarea Academy at the first meeting between the two schools at SA. Payne scored 17 points to lead SA to a win over the Lady Panthers at TA. ATR Archive

Payne wasn’t the only Lady Raider to score in double-figures. Forward Macy Williams poured in 12 points in the win for SA. Forward Holly McCain played an important role in the win. McCain scored six points and pulled down 11 rebounds. Guard Maddie Crisp chipped in six points in the winning cause.

“We were down by one point at the half. We came out and played a great overall game in the second half,” SA head coach Ty Kinslow said. “We played great defense and we had good offensive execution. We shared the ball really well down the stretch.”

The Lady Raiders are now 16-3 overall and 5-1 in the Region 3-AAA standings. They will take on Deerfield-Windsor in their final home game of the regular season on Tuesday, January 29, at 6:30 p.m.

Following that game, the Lady Raiders will play their last regular season game at the Brookwood School in Thomasville, GA on Friday, February 1. Tip-off is scheduled for 6:30 p.m.

The Lady Raiders will play in the GISA Region 3-AAA Tournament, which will be played the following week on Thursday through Saturday, February 7-9, at the Storm Dome on the campus of Georgia Southwestern State University. Tip-off time and opponent are to be determined.