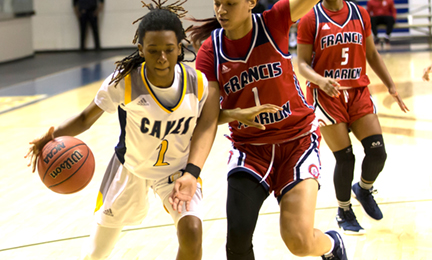 Lady Hurricanes get locked down by Lady Lakers

MORROW, GA – The Lady Lakers of Clayton State University (CSU) jumped on Georgia Southwestern State (GSW) early and never looked back as they handed the Lady Hurricanes a 78-63 loss on Wednesday, January 30, at CSU.

With the loss, the Lady Hurricanes are now 8-10 overall and 5-7 in the Peach Belt Conference. They have now lost four games in a row.

GSW scored 31 points in the fourth quarter in hopes of making a comeback. However, the Lady Hurricanes scored very few points in the first quarter and it proved to be costly. GSW went scoreless throughout the first seven minutes of the game. They were 0-14 from the field until Kayla Smith scored the first points for GSW.

The defense of the Lady Lakers was extremely effective in neutralizing the Lady Hurricanes’ offense. CSU held GSW to six first-quarter points, leaving them shooting 20 percent from the field. By the end of the first quarter, the Lady Lakers led 17-6.

CSU opened the second quarter with a 4-0 run until both teams went through a four-minute scoring drought until Jamesha Samuel scored for GSW to end the drought.

The Lady Lakers stayed ahead and took a 34-16 lead with 52 seconds left in the half. GSW closed the first half with a jump shot by Morgan Towells, but they still trailed CSU 34-18 at the half.

The Lady Lakers carried their momentum into the second half by expanding their lead to 46-21 midway through the third quarter. The Lady Hurricanes managed to cut their deficit to 20 points going into the final 10 minutes.

GSW was able to decrease CSU’s lead down to 13 on a layup by Lex Chatman with 4:16 left in the game. However, a three-pointer by the Lady Lakers put the game out of reach again.

GSW was able to cut their deficit to 12, but that would be as close as the Lady Hurricanes would get.

GSW made a season-low two three-pointers compared to CSU, who made 7 of 15 three-point attempts. Both teams struggled from the foul line. The Lady Hurricanes missed 10 free throws, while the Lady Lakers missed 14.

The Lady Hurricanes will try to end their four-game losing streak when they travel to Dahlonega, GA to take on the Lady Nighthawks of the University of North Georgia on Saturday, February 2. Tip-off is scheduled for 1:30 p.m.