AMERICUS – It was a fantastic way for the seniors of the Americus-Sumter boys’ basketball team to go out on Senior Night. The Panthers exerted total domination of the Hardaway Hawks from start to finish on their way to an 83-63 victory on Friday, February 1, at Americus-Sumter High School.

For nine seniors, it was their final regular season home game and they made the most of it.

“It was good. We had a lot of energy, excitement and enthusiasm early, especially for the seniors,” ASHS head coach Michael Hoffpauir said. “They’re a really tight-knit group of guys so we were really excited for the seniors that were out there playing. Adrenaline means everything in sports. The guys came out on fire. We shot the ball well. We got into transition and made a few dunk plays. It was awesome. It was a good night.” 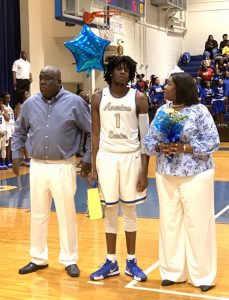 The Panthers jumped out to a 12-0 lead on the strength of three-pointers by McCuller and Lusane, plus three-straight baskets by Crumbley. From that point on, it was all Panthers. ASHS outscored the Hawks 16-10 to take a 28-10 lead by the end of the first quarter. The Panthers put on a show as Lusane dunked twice. His second dunk was a one-handed slam off a pass from Quevoluia Willoughby. Fellow senior Joshua Moore also threw down a one-handed slam to entertain the crowd. The Panthers continued to score in transition and led 44-26 at halftime.

The Hawks were able to cut the lead to 14 at 46-32. However, Lusane was fouled with 4:59 to go in the third quarter and made one of two free throws to push the ASHS lead back up to 15.

The Panthers went on a 5-1 run to push their lead back up to 18 at 51-33. This prompted a timeout by HHS head coach Kendall Mills. 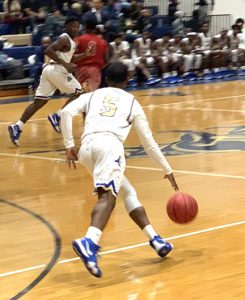 Out of the timeout, the panthers increased their lead to 55-35 on a basket by Flemming. The Hawks responded with a 5-0 run, but Sumlin ended it with a basket of his own. Then Flemming scored again on a fast-break layup to put the Panthers up by 19 at 59-40, prompting another timeout by the Hawks with 1:08 to go in the third quarter. Junior point guard Melton McCoy got in on the act with a jump shot to put the Panthers up 61-40. That was McCoy’s only basket of the game, but none less important. By the end of the third quarter, ASHS had a comfortable 63-44 lead.

HHS scored the first three points of the final quarter, capped off by a basket by Aaron Pitts. However, Trae Brown answered with two-straight three-pointers to put ASHS up 69-47.

Both teams traded baskets for the next few minutes, but the Hawks never made a serious dent in the ASHS lead as the Panthers went on to win by 20 points.