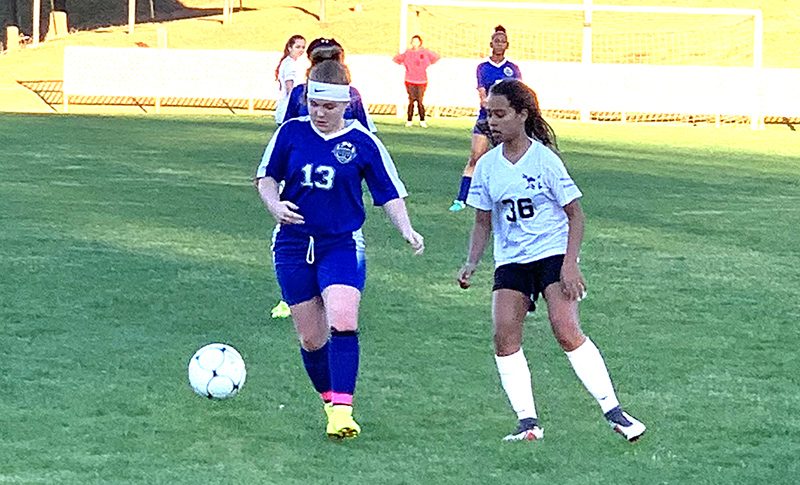 AMERICUS – The Americus-Sumter girls’ varsity soccer team played as hard as they could in their opening match against Shaw, but the Lady Raiders simply had too much firepower for ASHS. They showed it by defeating the Lady Panthers 10-0 in a mercy-ruled game on Wednesday, February 13, at Americus-Sumter High School (ASHS).

The Lady Raiders had the majority of the run of play. Therefore, they had many more chances to score than did ASHS. The Lady Panther varsity team consisted of the same players who are on the JV squad that defeated Crisp County’s JV team the day before. However, they were facing a different animal in Shaw (SHS).

SHS forward Jordyn Brock opened up the scoring very early in the match when she drove through the ASHS defense and scored to give the Lady Raiders a 1-0 lead. This was the first of Brock’s four goals on the night.

SHS added to their lead when Brianna Mahilas took a pass from Madison Owen and slotted it past ASHS goalkeeper Bernisha Sims. Brock scored her second goal a few minutes later, followed by a goal from Nefretari Williams to make it 4-0 in favor of the Lady Raiders. 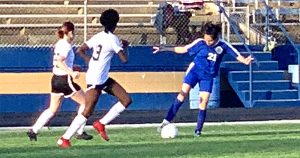 Americus-Sumter’s Betty Catalan-Gomez (21) trying to advance the ball up the field.
Photo by Ken Gustafson

Unfortunately for the Lady Panthers, SHS continued to keep up their pressure on the ASHS back line and produced more goals. Williams scored her second of the match, followed by Brock’s third. A few minutes later, ASHS defender Kristin Wooden was trying to clear the ball away from her team’s end on a corner kick by SHS, but the ball went off her leg in the wrong direction and into the ASHS net for an own goal.

Shannon Freeman then scored for the Lady Raiders to make the score 8-0 SHS.

The best chance for the Lady Panthers to score came from Wooden, but her shot was saved the SHS goalkeeper.

Both Williams and Brock scored their third and fourth goals respectively to end the match at 10-0. According to GHSA rules, once a team has a 10-goal lead, the game ends.