Americus-Sumter senior forward Joshua Lusane dunks the ball in a previous game this season. Both Lusane and junior shooting guard Trae Brown each scored 22 points to lead the Panthers to a monumental upset of Upson-Lee. ATR Archive

THOMASTON – It was a jam-packed, standing-room-only crowd at the gymnasium at Upson-Lee High School as the Americus-Sumter boys’ basketball team was attempting to do something that no other Class AAAA boys team had done in two years: end the two-year championship reign of the Upson-Lee Knights. The Knights came into the game as the two-time defending GHSA Class AAAA State Champions, having lost only one game all year.

The Panthers were down by as much as 14 points, but fought all the way back to topple the ULHS Knights 59-53 on Thursday, February 21.

ASHS junior guard Trae Brown led the comeback in the third quarter by making some big shots. Senior forward Joshua Lusane also came up big late in the second half, but none of his baskets were as big as a three-pointer he hit late in the game to give the Panthers a 53-51 lead. Brown later scored a crucial basket and free throw to give the Panthers a 56-53 lead. ASHS was able to get some defensive stops, and Lusane hit two free throws with 9.4 seconds left to seal the huge upset win over the Knights.

Both Lusane and Brown led the Panthers in scoring with 22 points each.

“Our guys came out and did their job tonight,” ASHS head coach Michael Hoffpauir said. “It’s such a special feeling to win on this court against this team (ULHS). Our guys believe in each other.”

It was a back-and-forth affair between both teams, but the Knights led 16-12 with five minutes left in the first half. However, ULHS went on a 10-2 run to take a 26-14 lead in the closing minutes of the first half.

Near the end of the half, Brown was called for traveling, which greatly upset Hoffpauir. Hoffpauir thought that the ULHS player should have been called for a foul and argued with the officials. Fortunately, he was not whistled for a technical foul. 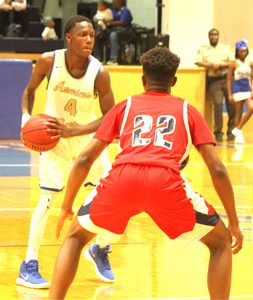 The Panthers scored four straight points near the end of the half to pull within 12 at 26-18. Then Lusane scored and was fouled, but he wasn’t able to complete the three-point play. However, ASHS junior guard Melton McCoy drove to the basket and scored. He was fouled on the play, but missed the free throw. The Panthers were able to get the ball back on a steal. Brown was able to score just before the half ended to cut the Knights’ halftime lead to 28-24.

Lusane led the Panthers in first-half scoring with 12 points.

The Knights got on the board first in the second half as Javeon Walker scored and was fouled. Walker made the free throw to give ULHS a 31-24 lead. This began a 7-0 run before Lusane scored to keep the deficit at 35-26. Brown then drove the lane and scored to bring the Panthers to within seven at 35-28. Lusane scored again with 5:04 left in the third quarter and was fouled on the play. This time, he converted the three-point play to bring ASHS to within three at 34-31.

Walker responded for the Knights with a basket to put ULHS up 36-31. ASHS senior guard Jakobe McCuller tried a three-pointer to bring the Panthers to within two, but the shot was off the mark.

About three minutes later, Brown hit a three-pointer for the Panthers to bring them to within five again at 39-34. However, the Knights responded with a three-pointer of their own to push the lead back up to eight at 42-34.

Both teams traded baskets on their next possessions as the third quarter was winding down. Brown scored again to cut the lead to six at 44-38. However, with 2.6 seconds left in the third quarter, the Knights’ Jarrett Adderton was fouled by senior small forward Michael Flemming on a three-point attempt. Adderton made only one of the three free throws, but the Panthers trailed 47-38 going into the fourth quarter.

The Panthers went on a 6-0 run to start the final quarter, capped off by a basket by senior guard David Sumlin. With 6:07 to in the game, the Panthers were only down 49-44.

The Panthers had been down by as much as 14, but had crawled their way back to within one point with 3:26 left to play. Then Brown nailed a three-pointer to give the Panthers a 53-51 lead. After that three-pointer, the Panthers would not trail in this game again.

After ULHS scored a tying basket, Brown scored again to give the Panthers the lead. Brown was fouled on the play and converted the three-point play. The Panthers came from 15 points down to take a 56-53 lead with less than two minutes to play. ASHS was just under two minutes away from pulling off a massive upset on the road in the state playoffs.

With 31.6 seconds to go, the Panthers had the ball. Senior small forward Sam Crumbley was fouled while shooting. He missed the first free throw. Then ULHS head coach Darrell Lockhart called a timeout to make Crumbley think about that second free throw.

It was no problem for Crumbley, however, as he made that all-important second free throw. The Panthers came up with a defensive stop on the Knights’ next possession and got the ball back. ASHS senior forward Joshua Moore was fouled. Moore missed both free throws, but the Knights turned the ball over. ASHS was now 9.4 seconds away from the upset and they had the ball. Lusane was fouled and sank both free throws to seal the 59-53 victory to end the two-year championship reign of ULHS.

The Panthers will be heading to Atlanta on Wednesday, February 27, to take on the Golden Lions of St. Pius X (26-3) in the next round of the state playoffs.Tip-off is scheduled for 7 p.m.