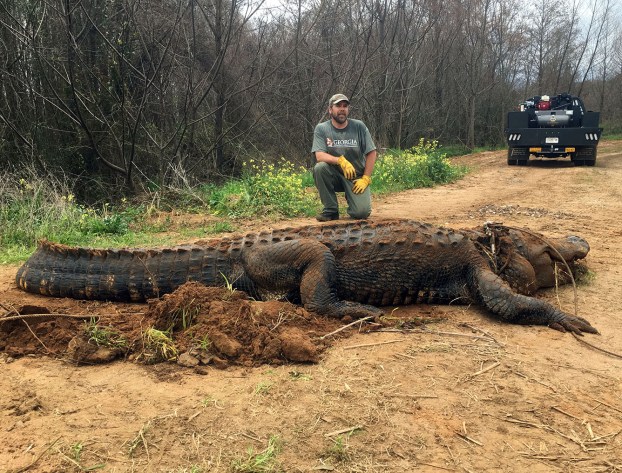 Brent Howze, a wildlife biologist with the Georgia Department of Natural Resources, takes a knee behind an alligator that was found in an irrigation ditch on the Sumter County side of Lake Blackshear on Monday. Howze said the gator, which unfortunately had to be euthanized, measured 13 feet, 4 inches long with a chest girth of 57 inches. Howze estimated that the gator weighed at least 700 pounds.

COBB — A viral photo of a Lake Blackshear alligator that has been making the rounds on social media is no hoax, according to a biologist with the Georgia Department of Natural Resources.

“Apparently a lot of people think it’s fake, but I can assure you that it is not,” said Brent Howze, a DNR wildlife biologist who works out of the agency’s regional office in Albany. “I’m the one in the picture, and you can probably tell that I didn’t get too close to it.”

“It” was a gigantic alligator that Howze measured at 13 feet and 4 inches long with a chest girth of 57 inches. Howze said the alligator weighed approximately 700 pounds.

A local person found the gator in an irrigation ditch near the Sumter County side of Lake Blackshear this past Monday morning and reported it to authorities. Howze said that when he received the news and headed up to Lake Blackshear that day to assess the situation and possibly move the gator to a safer place, he was expecting to find an alligator no more than 10 or 11 feet long.

“It took a while to get it out of that ditch. It was bigger than we originally anticipated and we had to use heavy equipment to move it,” Howze said.

When Howze and others on the scene finally got the ‘gator on a flat piece of land, they discovered that the animal was in such poor health that it had to be euthanized.

“It was a very old alligator in poor body condition with what appeared to be gunshot wounds,” Howze said. “It’s an unfortunate situation, but the best thing for the animal was to put it down.”

Despite the animal’s massive size, Howze said ‘gators like the specimen he dealt with on Monday pose almost no threat to humans, and that people shouldn’t fear swimming or playing in the water at Lake Blackshear.

“There’s only one way for an alligator to live this long, and it’s by avoiding humans,” Howze said. “I’ll be in the water at Lake Blackshear this summer for sure.”

More information about the American Alligator can be found on this https://srelherp.uga.edu/SPARC/PDFs/gator-fact-sheetA.pdf online fact sheet prepared by the University of Georgia’s Savannah River Ecology Laboratory.