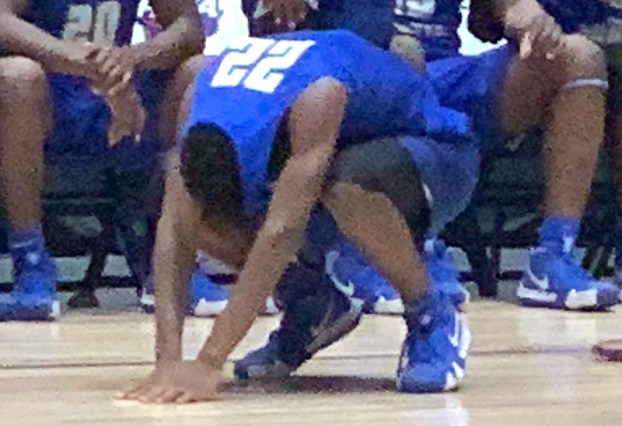 Americus-Sumter senior guard Quevoluia Willoughby is extremely disappointed after the Panthers loss in the state finals to Carver (Columbus). Photo by Ken Gustafson

MACON – It was the type of game in which every shot, every free throw and every defensive play meant the difference between winning and losing. It was also the type of the game in which every missed free throw, missed layup and turnover would mean the difference between winning and losing. In other words, the winning team would have to play a near perfect game to bring home the state championship trophy.

The Americus-Sumter Panthers (26-5) took the floor of the Macon Centerplex with the expectation that they would be that team to bring home a state championship trophy: something that ASHS hadn’t experienced in boys’ basketball since 1961.

They would be facing a team they knew quite well: the Tigers of Carver (Columbus).

Both teams are in the same region: Region 1-AAAA. This year, the Tigers had the Panthers’ number, winning three of the previous four meetings. However, this was different. The previous meetings didn’t matter. This was for the ultimate prize and bragging rights: the GHSA Class AAAA State Championship. Unfortunately for the Panthers, the three-point shooting of CC guard AJ Watts proved to be the deciding factor. Watts went 6 for 13 from beyond the arc, but none were more damaging to ASHS than the one he hit with less than 20 seconds to go in the game. That shot would lead to CC defeating the Panthers 58-55 to win the state championship.

“They (CC) made some big shots. We did exactly what we wanted to do. We kept them out of the paint, but they made some three-pointers that were miraculous,” ASHS head coach Michael Hoffpauir said. “We’ve been on a heck of a run. We did some great things. We aren’t going to hang our heads about anything. They made some shots that were just ridiculous. I’m not mad at our guys. We played hard. We executed the game plan. When games are close like this, it comes down to executing in the last minute. We made a mistake or two here and there, but for the most part, they made some big shots.” 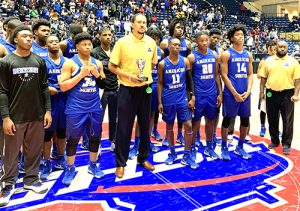 For The Tigers, Watts led them in scoring with 19 points. Eighteen of them came on his six three-pointers. Two other CC players were in double-figures. Devin Flowers scored 18 points and Jalen King had 12.

Perhaps the major difference in this game was the three-point shot. The Panthers, normally an excellent three-point shooting team, went 1 for 10 (10 percent) from beyond the arc. The Tigers, however, were 9 for 20 (45 percent).

Things couldn’t have started better for the Panthers. They got out to a 7-0 lead on baskets by Lusane, Quevoluia Willoughby and a free throw by Bradley. The Tigers went on a 6-2 run to close the gap, but the Panthers were able to maintain a 13-8 lead by the end of the first quarter. 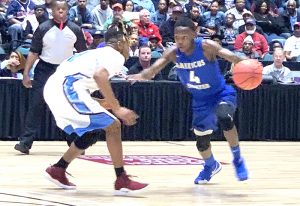 Americus-Sumter junior guard Trae Brown with the ball against a Carver (Columbus) defender. Brown scored four points in the loss to the Tigers.
Photo
by Ken Gustafson

The Tigers struggled to score early in the game as the Panthers performed solid defensive work. After a basket by Lusane early in the second quarter, the ASHS defense clamped down on the CC offense. The Tigers were having difficulty finding ways to score, causing the large contingent of ASHS fans to roar with approval.

Trae Brown drove through the lane and scored on a layup to give the Panthers a 17-11 lead, but the Tigers responded with a 4-0 run to cut the lead to two.

Both teams traded baskets on their next possessions, making the score 19-16 in favor of ASHS with a little over two minutes left in the half. 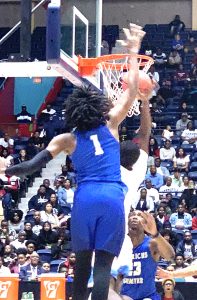 Ke’von Taylor drove in and scored for CC, but Lusane responded with a basket on the inside for the Panthers. With 20 seconds to go, Bradley was fouled while shooting and made both free throws to give ASHS a 23-20 lead at halftime.

Lusane led the Panthers in first-half scoring with 10 points and pulled down five rebounds. The Panthers dominated the boards in the first half, outrebounding CC 19-6. They would end up outrebounding the Tigers 36-23 for the game.

Flowers led the Tigers in first-half scoring with six points. The shooting in the first half from both teams was fairly even. ASHS shot 40.9 percent from the field (9-22), while the Tigers shot 37.5 percent (9-24). The Panthers went to the foul line six times in the first half and made 5 of 6 free throws. On the other hand, the Tigers only got to the charity stripe once. That free throw was made by Jalen King.

To begin the second half, Joshua Moore grabbed an offensive rebound and scored to give the Panthers a 25-20 lead. This was followed by two made free throws from Brown to give ASHS a seven-point lead. 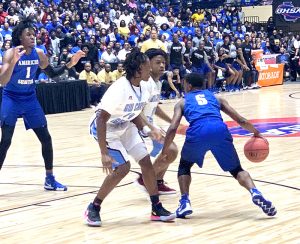 ASHS senior guard David Sumlin with the ball against Carver (Columbus). Sumlin scored two points and had two assists in the game.
Photo by Ken Gustafson

However, Watts nailed a three-pointer for the Tigers to cut their deficit to four at 27-23. Watts struck again with another three-pointer to bring the Tigers to within one. However, the Panthers scored four straight points, capped off by two free throws by Lusane.

Taylor drove the lane and scored for the Tigers, but Lusane responded with a basket of his own to keep the lead at 33-28.

The Panthers continued to have the edge on the boards in the third quarter. They also were able to keep the lead by forcing turnovers on defense. They were able to get a steal with less than two minutes left. This led to Lusane getting fouled while shooting. Lusane made both free throws to give ASHS a 34-28 lead.

However, the Tigers didn’t go away. Flowers hit two three-pointers to bring CC to within one at 35-34 with 36.9 seconds left in the third quarter. 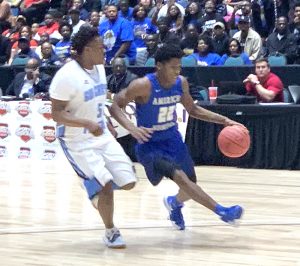 Quevoluia Willoughby drives to the basket against Carver (Columbus). Willoughby scored 10 points and grabbed seven rebounds in the contest.
Photo by Ken Gustafson

Then with 25.9 seconds left, Michael Flemming made a huge defensive play, knocking the ball off the foot of a CC player. This led to a basket by Bradley at the other end to give the Panthers a 37-34 lead by the end of the third quarter.

ASHS was eight minutes away from winning their first state championship in boys’ basketball in almost 60 years.

Quevoluia Willoughby scored the first basket of the fourth quarter to give the Panthers a five-point lead. After one made free throw by the Tigers, Bradley knocked down a three-pointer to put the Panthers up 42-35. This prompted CC head coach Warren Beaulah to call timeout with 6:49 left.

Out of the timeout, King scored on a slam-dunk for the Tigers, but Lusane responded with a basket for the Panthers. Willoughby would make two free throws to put ASHS up 46-39, but Watts hit another three-pointer to bring the Tigers to within four. CC forced a turnover, then Flowers hit a long three-pointer to bring CC to within one at 46-45. This game was becoming what everyone thought it would be: a back-and-forth fight between two evenly matched teams from the same region for the ultimate prize. 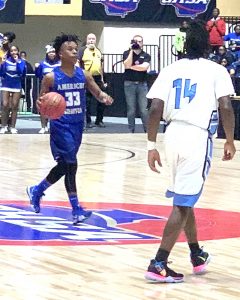 With the Panthers up 48-45, the Tigers scored on another slam-dunk by King. CC then forced a turnover. On their offensive possession, Ja’Cyais Credle was fouled and made one of two free throws to tie the game up at 48-48. Lusane scored to give ASHS the lead, but Watts hit a three-pointer off the backboard to give the Tigers a 51-50 lead. Sumlin was fouled at the other end and made one of two foul shots to tie the game at 51-51 with 1:50 to go. At that point, CC called a timeout.

It would come down to who would made a crucial play or mistake in the last 1:50 that would decide the state championship.

Out of the timeout, the Tigers turned it over, and Moore scored on the inside to give the Panthers the lead. Watts was fouled at the other end, but made one of two free throws. The Panthers had the ball with 58.8 seconds left and a one-point lead when Hoffpauir called timeout.

Out of the timeout, Sumlin was fouled and would go to the line. He made one of two foul shots to give ASHS a 54-52 lead.

However, with less then 20 seconds left, Watts hit a three-pointer to give the Tigers a one-point lead. It turned out to be the biggest shot of the game. The Tigers would not relinquish the lead from then on out.

Quevoluia Willoughby goes up to score in the state title game.
Photo by Ken Gustafson

Watts was immediately fouled on the inbounds pass, but only made one of two free throws. The Panthers still had 3.1 seconds left to get a tying three-pointer. Hoffpauir called a timeout to draw up a play that would give them just that.

However, the inbounds pass was intercepted by CC, ending the Panthers’ bid for the state title.

There were many points in this game that one could look at and say, ‘That was the difference.’ However, according to Hoffpauir, an inbounds play late in the game by ASHS that backfired was crucial. “We have to reflect and look at our mistakes,” Hoffpauir said. “At the end, when we ran our sideline break to get the ball in, we had two timeouts and we didn’t need to rush. We threw the ball away. That was critical.”

Hoffpauir also mentioned that the last three times the Panthers went to the foul line, they made only one of two free throws. He sited that as being critical as well. “Every one counts in a close game like this,” Hoffpauir said.” 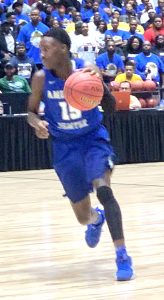 In spite of the heartbreaking loss in the state finals, Hoffpauir was extremely proud of how his players represented ASHS, the city of Americus and Sumter County. “I’m very proud of them. I knew that Carver was going to fight back, but I’m extremely proud of what we’ve done,” Hoffpauir said. “It has been a big run. We knocked off a bunch of No. 1 seeds and we got to the big dance (State Championship Game). For a school that has been plugging a way to get here for a while, and finally reaching this point, that’s huge. That’s huge for the community. It’s huge for the school and it’s big for our team. They don’t know it yet, but they’ve done something that’s really great. I told them not to hang their heads about anything. We’ve accomplished our goal.”

AMERICUS – On the eve of the Boys’ Class AAAA State Championship Game between Americus-Sumter and Carver (Columbus), the Panthers... read more