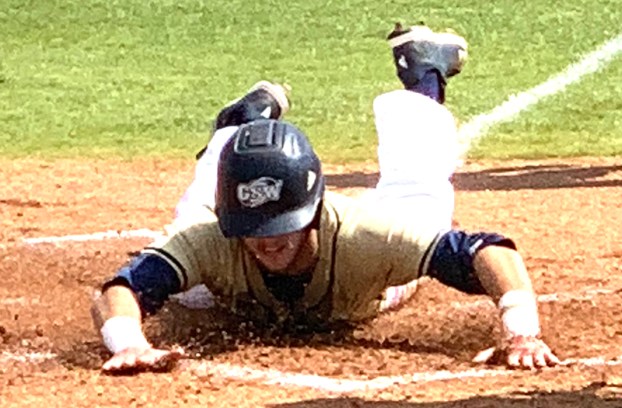 AMERICUS – The Georgia Southwestern State University baseball team defeated Flagler College 9-2 on Friday, March 8. However, the Saints used strong pitching and took advantage of errors committed by the Hurricanes to sweep the doubleheader 5-2 and 4-2 on Saturday, March 9, at the GSW baseball complex.

GSW falls to 9-13 overall and 4-8 in Peach Belt Conference play.

Another factor in the two-game loss, particularly in the second game, was that the Hurricanes had runners in scoring position on numerous occasions, but failed to drive them home. “We’ve got to be able to capitalize when those opportunities come,” GSW head coach Josh McDonald said. “We’ve got to do a better job of scrapping back and putting good at bats together, which we didn’t do today.”

In Game 1, the Hurricanes got on the board first in the bottom of the first inning. 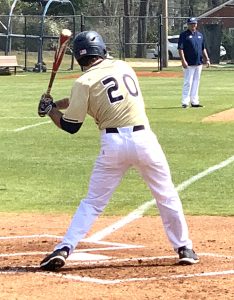 GSW right fielder Jonathan Martin went 1 for 3 and drew a walk in Game 1 of the two-game Saturday doubleheader against Flagler College.
Photo by Ken Gustafson

Second baseman Jason Baita led off with a single, but was picked off first base. Tyler Skelton drew a walk from FC starter Robert Girgis. Jonathan Martin then singled, moving Skelton to second. After Hunter Foster struck out for the second out of the inning, Matthew Mamatas singled to right field, driving in Skelton to give the Hurricanes an early 1-0 lead.

The Saints tied the game in the top of the third. Second baseman Ja’Kobi Dasher led off with a single off GSW starting pitcher Sage Holderfield. Jimmy Peck was then hit by a pitch. With runners at first and second with nobody out, Dillon Reed grounded out, moving the runners up to second and third with one out. Austin Davis then hit into a fielder’s choice, scoring Dasher to tie the game at 1-1.

GSW had a chance to take the lead in the bottom of the second. Skelton led off the inning with a single. After Martin and Foster both flew out, Mamatas singled to put runners at first and second with two outs. However, Bo Halcomb hit into a fielder’s choice to end the inning.

The Saints took the lead in the top of the fourth. Sean Lawlor led off the inning with a single. Frankie Martello was hit by a pitch, and right fielder Connor Laspina reached on an error, allowing Lawlor to score to give the Saints a 2-1 lead. 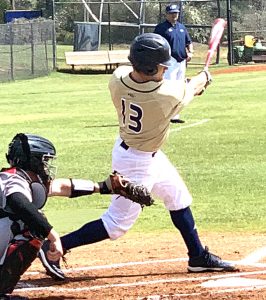 GSW second baseman Jason Baita went 1 for 3 at the plate and scored a run in the Hurricanes’ 5-2 loss against Flagler College in Game 1 of a two-game doubleheader on Saturday, March 9.
Photo by Ken Gustafson

FC added to its lead in the top of the fifth inning. Reed led off the inning with a double. After Austin Davis popped out, Aaron Anderson singled to put runners at first and second with one out. Lawlor singled to right field, scoring Anderson to give the Saints a 3-1 lead.

In the top of the sixth inning, FC added two more runs. Laspina led off with a double. Steven Dipuglia then hit into a fielder’s choice, moving Laspina to third. Dasher then reached on an error to give the Saints runners at the corners with one out. GSW reliever Stewart Tyler then threw a wild pitch, allowing Laspina to score and Dasher to move to second base. Catcher Jimmy Peck then doubled down the left field line, scoring Dasher to give FC a 5-1 lead. Tyler was able to strike out Reed and get Davis to fly out for the third out, but the damage had been done as the Saints added two more insurance runs.

The Hurricanes tried to get back in it in the bottom of the seventh. Matthew Mamatas hit an RBI single down the right field line, scoring Jason Baita. However, that would be the last run of the game for the Hurricanes. They were not able to make a comeback and fell in Game 1 to FC by the score of 5-2. 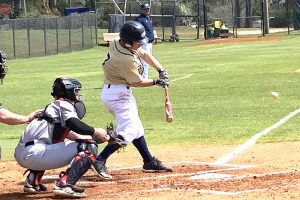 GSW shortstop Matthew Mamatas went a combined 4 for 8 at the plate and drove in two RBIs in the doubleheader against Flagler College on Saturday.
Photo by Ken Gustafson

GSW starting pitcher Sage Holderfield took the loss. He is now 1-4. Holderfield pitched four innings, giving up two runs on four hits. One of those runs was earned. He walked none and struck out four.

Robert Girgis got the win for FC. He is now 4-0 on the year. Girgis pitched seven innings, giving up one earned run on six hits. He walked one batter and struck out nine.

In Game 2, the Saints took a 2-0 lead early in the top of the first. Reed led off with a single and Austin Davis drew a walk off GSW starting pitcher Matthew Snider. After Aaron Anderson popped out, Sean Lawlor reached on an error by GSW shortstop Matthew Mamatas. This allowed Reed to score and Davis to advance to third base. Frankie Martello then hit into a fielder’s choice, which allowed Davis to score.

However, the Hurricanes responded with two runs in the bottom of the first to tie the game. Jason Baita led off with a walk off FC starting pitcher Blair Calvo. Tyler Skelton singled, allowing Baita to advance to third. The Hurricanes had runners at the corners with nobody out. Calvo then threw a wild pitch, allowing Baita to score and Skelton to advance to third. Jonathan Martin hit into a fielder’s choice, allowing Skelton to score the tying run.

The pitching of both teams held the offenses in check until the top of the ninth inning. The Saints had runners at second and third when Dillon Reed singled to drive both runners in and give the Saints a 4-2 lead.

The Hurricanes were not able to respond in the bottom of the ninth, and FC won Game 2 by the score of 4-2.

With the doubleheader sweep of the Hurricanes, FC improves to 7-5 overall and 13-10 in the Peach Belt Conference. 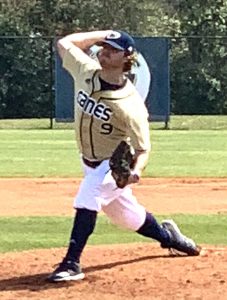 GSW starting pitcher Sage Holderfield struck out four Flagler hitters in the Hurricanes’ 5-2 loss to the Saints in Game 1 of a Saturday doubleheader.
Photo by Ken Gustafson

In spite of the loss, Matthew Snider pitched five strong innings as the Hurricanes’ starter on the mound. Snider gave up two runs on three hits. Both of those runs were unearned. He walked two and struck out one. A.J. Hayes came on in relief of Snider. Hayes pitched three innings, giving up no runs on two hits. He walked no batters and struck out one. Cole Garrett came on in relief late in the game. Unfortunately for Garrett, he took the loss and is now 1-2 on the year. Garrett gave up two runs on no hits, but walked two batters. Both runs were earned.

Harrison Timberlake was the final pitcher used by GSW. Timberlake came on in relief of Garrett and gave up one hit.

Blair Calvo pitched 3.2 innings for the Saints and gave up two runs on five hits. Both runs were earned. He walked one batter and struck out five. Ryan Ashworth came on in relief of Calvo. Ashworth ended up being the winning pitcher and is 3-2 on the year. He pitched 5.1 innings, giving up no runs on four hits and striking out four GSW batters.

The Hurricanes will then resume PBC play when they travel to Aiken, SC for a three-game series against the University of South Carolina Aiken Friday through Sunday, March 15-17. First pitch for Friday’s game will begin at 5 p.m.

MACON – It was the type of game in which every shot, every free throw and every defensive play meant... read more