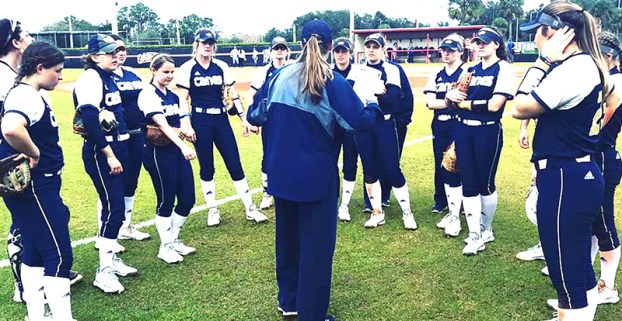 AMERICUS – The Georgia Southwestern State University softball team opened Peach Belt Conference play with a doubleheader at home against the Bobcats of Georgia College on Saturday, March 9. The Hurricanes fell in Game 1 by the score of 5-2, but rebounded to take Game 2 by the score of 4-2 at the GSW soft ball complex.

Kayla Kerr put the Hurricanes on the board and received two RBIs when she singled, scoring Chloe Zoeller and Allyson Murdock to cut the deficit to 3-2. However, the Bobcats scored one run in the fourth and another in the fifth to secure the 5-2 win.

In Game 2, GSW starting pitcher Shannon Gibson earned her first win of the season. Gibson pitched 6.2 innings, giving up two runs on eight hits. She also struck out three hitters on her way to leading the Hurricanes to the 4-2 win.

In the bottom of the first, Kerr ripped a double down the left field line, scoring Zoeller to give the Hurricanes a 1-0 lead. Lauren Kuerzi then drove in Kerr to increase the lead to 2-0.

The Bobcats responded in the top of the third by loading the bases. A passed ball allowed GC to score a run to cut GSW’s lead to 2-1. However, Sara Beth King struck again for the Hurricanes. King drilled a two-run home run to give GSW breathing room. In the top of the seventh, the Bobcats tried to make a comeback when Hayley Howell hit a sacrifice fly to left field. That pushed home a run for the Bobcats, but GSW was able to hold on and earn the 4-2 victory.

The Hurricanes (10-10, 1-1 PBC) will travel to Rome, GA for a two-game series against Shorter University on Wednesday, March 13. The first pitch of Game 1 is scheduled for 2 p.m.