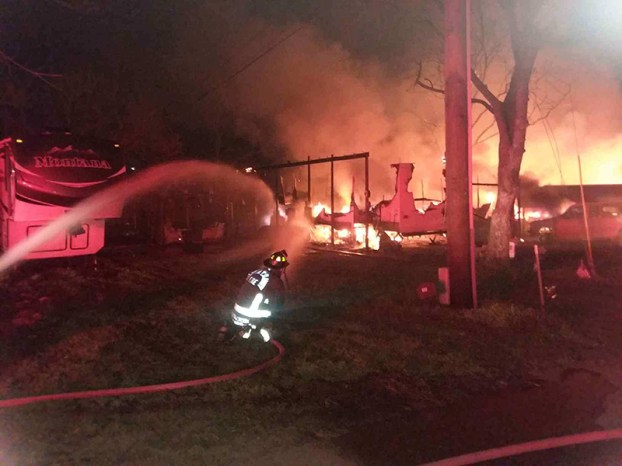 Fire personnel from several agencies worked for more than three hours to extinguish the fire and keep it from spreading.

COBB — A Saturday night mobile home fire threatened a neighborhood on the Sumter County side of Lake Blackshear but firefighters were able to get the blaze under control.
According to the report, Sumter County & Rescue responded to 4262 U.S. Highway 280 East and Culpepper Drive at 11:17 p.m. Saturday, to a report of a mobile home ablaze and visible from the marina. The first unit to arrive, in 1.5 minutes, found a trailer fully involved in flames as well as propane gas cylinders exploding and threatening surrounding trailers. Sumter County requested aid from Crisp County Fire & Rescue, Leslie Fire Department, and all other Sumter Fire & Rescue units. 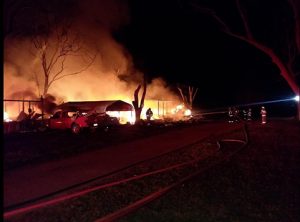 While Sumter firefighters used water to battle the fire, a Macon County firefighter and Macon County Fire Chief arrived and helped a couple from one of the nearby trailers.
Sumter County had three engines and two tankers on scene along with a Leslie tanker. Two Crisp County tankers arrived along with the Crisp Fire Chief, Gold Star EMS, and personnel from the Sumter and Crisp County sheriffs’ offices. 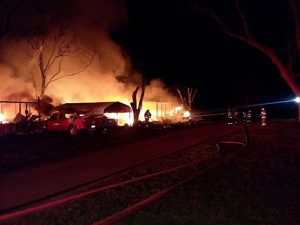 The report says firefighters extinguished a 100-pound propane gas cylinder which was on fire. The original trailer fire spread to three additional trailers, consuming two vehicles and a boat. It was stopped before spreading further.
What was described as a “large” fire was completely out by 2:30 a.m., according to the report. No injuries were reported.

By Beth Alston AMERICUS — With barely a quorum present, the Sumter County Board of Education held its monthly work... read more