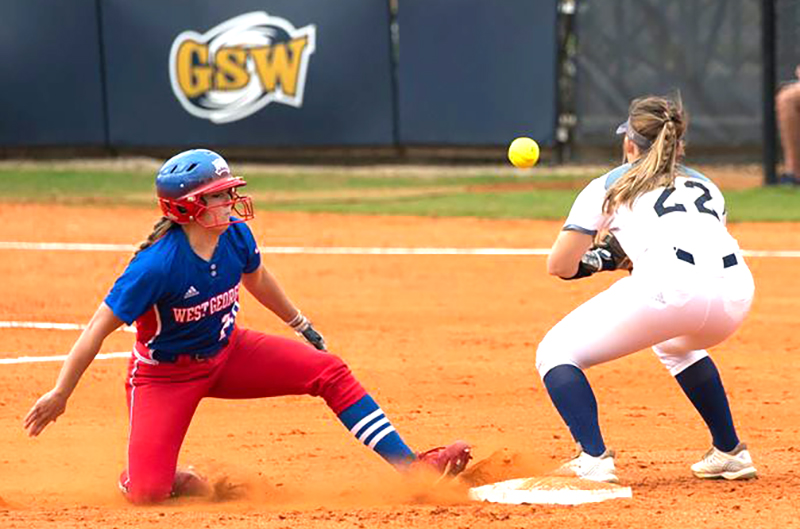 GSW second baseman Hayley Tierce (22) attempting to tag out a runner at second base in a previous game. Tierce went 4 for 8 at the plate, scored two runs and drove in two RBIs in the two-game sweep of USCA. Photo by GSW

AMERICUS – The Georgia Southwestern State University softball team swept a doubleheader against the Pacers of the University of South Carolina Aiken (USCA) by the scores of 4-2 and 6-2 on Saturday, March 23, at the GSW softball complex.

With the two-game sweep, the Lady Hurricanes have an overall winning record of 20-12 and are currently 6-2 in the Peach Belt Conference.

GSW pitcher Shannon Gibson pitched in both games and was able to earn two wins.

Gibson pitched a complete game in Game 1, giving up four runs and striking out one batter. In Game 2, Gibson came on in relief of starting pitcher Jennifer Jernigan. In that game, she struck out four Pacer batters and walked three while giving up one hit.

With a runner on base, GSW second baseman Hayley Tierce singled up the middle in the bottom of the first inning. This allowed Chloe Zoeller to score, giving GSW an early 1-0 lead. However, USCA loaded the bases in the top of the third. Kathleen St. Peter was then hit by a pitch, allowing the tying run to score.

The Lady Hurricanes struck back in the bottom of the fourth. With Haley Griffin on third, Briana Bryson laid down a bunt, allowing Griffin to score. Zoeller followed that up with an RBI single, scoring Mackenzy McFarland to increase GSW’s lead to 3-1.

The Lady Hurricanes scored another run in the bottom of the fifth. Tierce reached on an error. Then McFarland singled to left field, scoring Tierce to increase the Hurricanes’ lead to 4-1. The Pacers scored one run in the top of the seventh, but GSW was able to hold on and win Game 1 by the score of 4-2.

The Lady Hurricanes are currently in fifth place in the PBC standings. They have a conference record of 6-2 and are one game behind Columbus State, Georgia College and North Georgia, who are all tied at 5-1. GSW will try to keep their winning streak going when they step out of conference to take on Middle Georgia State in a doubleheader in Cochran, GA on Wednesday, March 27. Game 1 is scheduled to begin at 3 p.m., followed by Game 2 at 5 p.m.