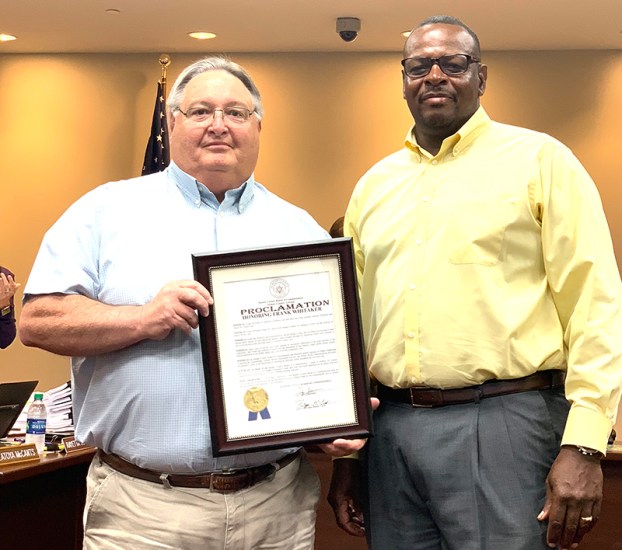 BOC Chairman Clay Jones, at right, presents former Sumter County Department of Public Works Director Frank Whitaker with a proclamation plaque for his years of service in that capacity.

AMERICUS — County Nurse Manager Luneda Brown, R.N., and District Clinical Services physician Dr. Audrey Brown, M.D., came before the Sumter County Board of Commissioners at the board’s Tuesday work session to express the need for additional space for the continued provision of public health services at the Sumter County Health Department. They explained that they need more space in order to treat patients who are suffering from the HIV virus, sexually transmitted diseases (STD) and tuberculosis (TB). “This is a public health program. We are serving the people and citizens of Sumter County,” Luneda Brown said.
Audrey Brown told the BOC that District Clinical Services delivers primary, comprehensive care to individuals who are infected with HIV. “Our program is pretty comprehensive,” she said. “Under the District Clinical Services umbrella, we have several services such as caring for patients with HIV, STD, and TB. Specifically, we are talking about the Ryan White Program.”
She said went the program delivers primary care to HIV-infected people. “Currently, we are located in the same building as the health department,” she said. “Over the years, we have grown as the need for care has grown. Unfortunately, we have out grown the space that we have in the Sumter County Health Department.”
She said she and Luneda Brown are both asking the BOC for approval to use the building once occupied by Gold Star Ambulance Services and PharmaCentra. She said they would like to do a remodeling of the building and would be willing to pay the cost for its remodeling and renovation.
County Administrator Rayetta Volley told the BOC that the Browns were there to present their plans to the BOC in regards to how they would do the remodeling and use the additional space in the building if they were granted approval to move in. No motion for approval was made, but discussion regarding the issue is ongoing. 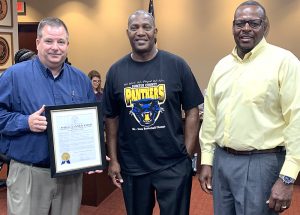 The Sumter County 10u boys’ basketball all-star team was honored with a proclamation at the meeting.
The team was honored for its accomplishment in winning the Georgia Recreation and Parks Association (GRPA) 10u state championship in March. Board Chair Clay Jones presented the proclamation plaque to head coach Dwight Harris and the team.
Sumter County Parks and Recreation Department (SCPRD) Director Tim Estes reminded the BOC that they bestowed the same honor to most of the same players, if not all of them, for winning the GRPA state championship in football. “They just repeated that in basketball and didn’t have a close game all the way through the district tournament and the state tournament,” Estes said. “They finished with an overall record of 7-0, and I would guess that I would be safe in saying that they won every game by 20-plus points. They just dominated the competition.”
Estes went on to tell the BOC that the SCPRD received a social media post from the director of the Carrollton Parks and Recreation Department, the organization that hosted the state tournament, stating that the team was extremely well behaved and that their conduct off the court was exemplary. “We always celebrate success on the field or on the court, but when you can be the state champion and the host of that state championship tournament takes the time to send you an email to say how well behaved you were and what a fun group you were to deal with and how well behaved our parents were, that makes it even better,” Estes said. “A lot of that comes from good parenting, but on site, a lot of that comes from a good, strong, firm hand that also loves these kids. That’s head coach Dwight Harris.”
With that, Jones presented Harris and members of the team with a plaque and read the proclamation. Harris told the BOC that the boys are an excellent group of guys and that they have excellent parents. “The entire staff was just remarkable,” Harris said. “These boys are student-athletes. We make sure that they get the job done first at school.” Harris went on to recognize Sumter County Intermediate School teacher Renee Mays, Ed.D., for her efforts in making sure the boys do well in the classroom. “She does not hesitate to call me if there is a problem,” Harris said.
Estes told the BOC that the SCPRD youth baseball season is underway and that they have six adult softball teams playing this year. He also mentioned that the youth track and field program had 31 participants in the District 3 Meet in Thomasville on April 6. “Twenty of the participants qualified for the GRPA State Meet, which will be in Jefferson, Ga., the first week of May,” Estes said. “They’ve had a lot more success this year than they’ve had in years past percentage wise.” Estes went on to say that on Saturday, April 13, the SCPRD will hold its annual Easter Egg Hunt at Boone Park at 10 a.m. He also said they are working on making a new sign at the entrance to the SCPRD baseball, football and soccer complex on U.S. Highway 19 South. “One of the issues and one of the reasons we haven’t replaced that sign since they did the widening of that project is because we have been trying to get an official address on U.S. 19,” Estes said. He said he found out earlier in the day that it has been taken care of and that 743 U.S. Highway 19 is the official address.
Chair Jones also issued a proclamation to outgoing Department of Public Works Director Frank Whitaker who recently retired after serving Sumter County in that capacity since Feb. 4, 2013.

From Staff Reports   CARROLLTON, GA – After taking two out of three games at Columbus State last weekend, the... read more