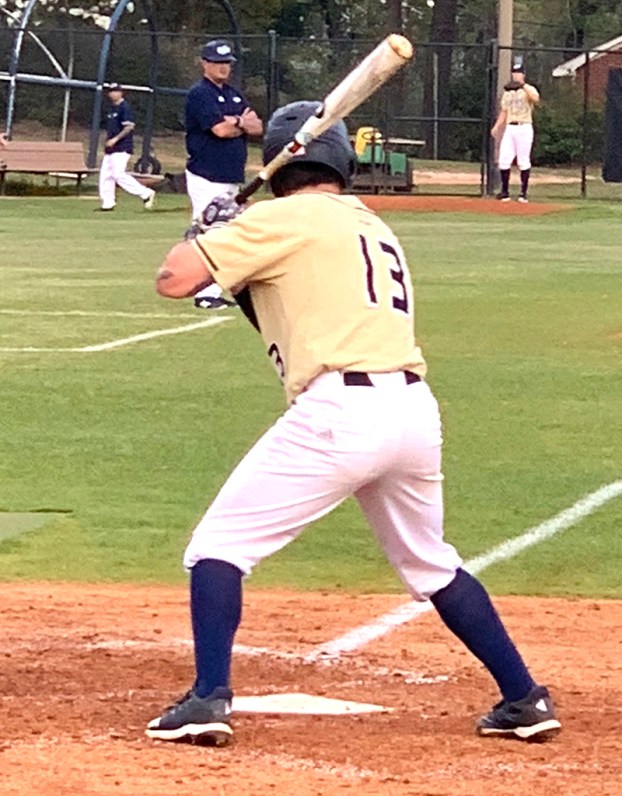 GSW senior infielder Jason Baita was one of only two GSW players with multiple extra-base hits in the three-game series against Francis Marion University. ATR Archive

AMERICUS – Since their 15-3 drubbing at the hands of Middle Georgia State on Wednesday, April 3, the Georgia Southwestern State University baseball team has won seven of its last 11 ball games. The Hurricanes recently won their third straight Peach Belt Conference series as well. In their most recent three-game series, the Hurricanes won two out of three games against Francis Marion University (FMU) at Hurricane Stadium. They defeated the Patriots 8-5 and 4-2 in a double header on Saturday, April 20. They dropped the third game 12-4 on Easter Sunday, April 21, but they’ve been playing much better baseball over the last three and a half weeks.

GSW is now 19-28 overall and 12-15 in the Peach Belt Conference. FMU falls to 25-19 overall and 15-14 in the PBC. The 12 conference wins for the Hurricanes ties a school record for most conference wins in a season since GSW switched from NAIA status to NCAA Division II. 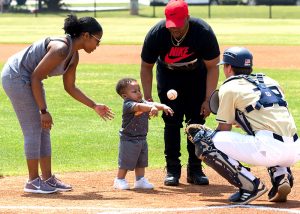 Caiden Foster throws out the first pitch before Game 1 of GSW’s double-header against Lander University on Saturday, April 13.
Submitted Photo

Before the Hurricanes took two out of three against FMU, they played PBC opponent Lander University in a three-game series on Friday and Saturday, April 12-13. Saturday was Canes vs Cancer Day at GSW. To commemorate that day, Caiden Foster threw out the first pitch before the Hurricanes took on the Bearcats in Game 1 of a Saturday double header. It was to kick off a fundraiser for childhood brain tumors. GSW won Game 1 by the score of 11-7, but lost the second game 6-4.

In the FMU series, Tyler Skelton led the Hurricane offense by going 4-for-10 at the plate. He also drew three walks and was hit by a pitch once. Jonathan Martin and Jason Baita were the only Hurricanes with multiple extra-base hits. Martin belted two doubles and drove in a team-high four RBIs. Baita has a triple and a home run during the series against the Patriots.

GSW starting pitcher Tucker Smith earned his eighth win of the season. Smith held FMU to one unearned run in Game 1. He struck out four batters and walked none.

GSW relief pitcher A.J. Hayes earned a save and a win on the same day. Hayes pitched a total of seven scoreless innings on Saturday. He scattered a total of three hits, walked nine and struck out two. While Hayes was on the mound, the Patriots were held to a .143 batting average.

The Hurricanes will try to keep their winning ways going when they host UNC Pembroke in their final three games of the regular season. GSW will play UNC Pembroke in a double header on Saturday, April 27. Game 1 will start at 1 p.m., followed by Game 2 at 4 p.m. The final game of the series and the regular season will be on Sunday, April 28, at 1 p.m.

The teams that finish in the top eight of the PBC standings will qualify for the Peach Belt Conference Tournament. As of right now, the Hurricanes are tied for the eighth and final spot with Lander University. Both teams have a PBC record of 12-15.

Cougars jump out to double-digit lead to beat Schley County

From Staff Reports   COLUMBUS – Having lost two straight games to the Wildcats, the Brookstone Cougars let out their... read more