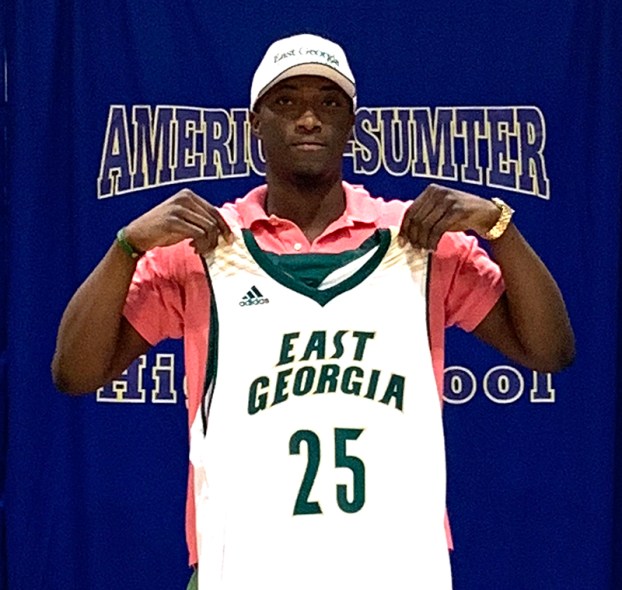 AMERICUS – Americus-Sumter senior center Joshua Moore signed a letter of intent to continue his education and play basketball at East Georgia State College, a junior college located in Swainsboro, GA. The signing took place on Wednesday, May 1, in the ASHS gymnasium in front of his teammates, coaches, classmates and family members.

Moore was recruited by schools such as South Georgia Tech, Andrew College, Albany Tech and Labette Community College in Parsons, KS, but has chosen to play for the Bobcats. Moore told the Americus Times-Recorder that after his two years at EGSC, he plans to transfer to a four-year school or play basketball overseas. Once his basketball career is over, Moore plans to attend law school. 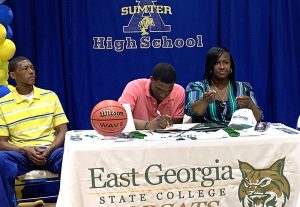 Joshua Moore, middle, signs his letter of intent to continue his education and play basketball at East Georgia State College. Moore’s father, Michael Moore Sr., is on the left and his mother, Bobbie Jackson, is on the right.
Photo by Ken Gustafson

During his senior season, Moore averaged 7.3 points per game, 5.4 rebounds per game and 1.7 blocks per game. ASHS head coach Michael Hoffpauir told the crowd that Moore got to this point because of his dedication and drive. “In my second year here, I was down at the gym at the Ninth Grade Academy and Moore was trying out for the ninth grade basketball team,” Hoffpauir said. “He was a little awkward and was missing layups, but we decided to keep him because of his size and I believe in big men. The kid had drive. It has been and honor and a blessing to have watched him grow and mature to be a good, young man with excellent grades. He has had a tremendous work ethic in the weight room and on the court. That has allowed him to get to this point where he is about to sign a scholarship to play at the next level.”

EGSC head coach Leroy Jordan Jr. told the Americus Times-Recorder that Moore will be an excellent fit for his dribble-drive offense. “He will be used in the stretch four position. He will be our guy that will pick and pop. He’ll roll and play in the post with his back to the basket,” Jordan said. “We just want to extend him out into our offense. On the defensive end, he’ll be able to defend some of the bigger guys in our conference because of his big body. He’s strong and athletic. We are hoping that he will be able to defend the big men that he’ll see once we get into conference play.”

Being that EGSC and SGT are in the same conference, Moore will return to Americus next year when the Bobcats take on the Jets.

ASHS principal Kimothy Hadley told the Americus Times-Recorder that he is extremely proud of Moore and the rest of the ASHS student-athletes for their success in academics and athletics. “Today’s signing shows the work ethic that has been put in and the determination that they have given throughout their careers,” Hadley said, “As a result, they end up having the opportunity to play collegiately. Hats off to our coaches, our athletic director, our parents and the community for the support that we receive.”