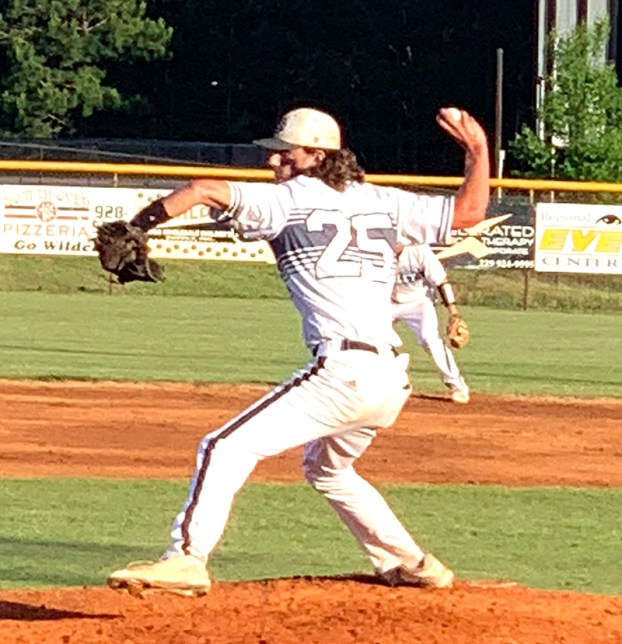 Schley County’s Ashton Goodin was the starting pitcher in Game 2, but created the game and series-ending double play with his throw to the plate from center field. Photo by Ken Gustafson

ELLAVILLE – The Schley County Wildcat baseball team came up with a key hit by Dakota Albritton in Game 1 and a tremendous throw to the plate by Ashton Goodin in Game 2 to earn a two-game sweep of Telfair County (TC) in the first round of the GHSA Class A-Public State Playoffs on Thursday, May 2, at Schley County High School (SC). The Wildcats won both games by the score of 4-3.

As a result, the Wildcats will move on to the second round and will host either Commerce or Pelham on Wednesday, May 8.

“First and foremost, Telfair played their tails off. Coach Hart Mizell has done a phenomenal job with that group,” SC head coach Chuck Cheek said. “We saw them here two years ago. They have a couple of kids that are back that were young when they played back then. Both of their pitchers did a great job. They had some big hits. Some guys at the bottom of their order got base hits. One of them was a bloop single and one of them was a soft line drive, but they both found grass. I told our guys that if we would play the first four or five innings like we do the last three or four innings, we wouldn’t be in these situations.” 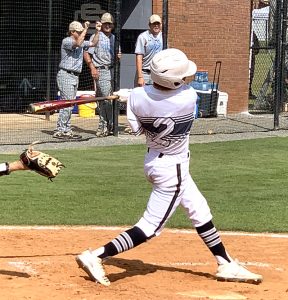 Schley County center fielder Garrett Peavy got an RBI single in the second inning of Game 2 to help the Wildcats win.
Photo by Ken Gustafson

In Game 1, both teams were tied at 3-3 going into the bottom of the seventh inning. Lorne Barineau led off the inning with a single. After Trypp Lumpkin flew out, Michael Wainwright knocked a double to center field. With runners at second and third with one out, Garrett Peavy drew a walk to load the bases. It was Dakota Albritton’s time to be a hero. Albritton seized the opportunity by getting an infield hit to score the winning run. Albritton went 1-for-4 in that game, but his one hit won the game for the Wildcats.

Dylan Windham led the Wildcats’ offensive attack. He went 2-for-3 at the plate with a double and a single. 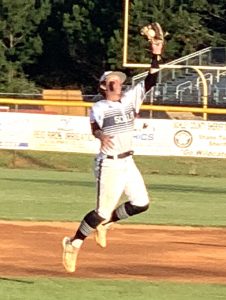 For the Trojans in Game 1, Cameo Blankenship led them offensively. Blankenship went 2-for-3 at the plate with two singles and scored a run. Noah Harrelson started the game for the Trojans. Harrelson pitched 6.1 innings and gave up four runs on six hits. He walked one batter and struck out three.

In the top of the sixth inning with SC leading 2-1, Trey Bess belted a solo home run to tie the game. The Wildcats regained the lead in the bottom of the sixth. With Albritton at third and two outs, Trent Bivins tripled on a line drive to right field, scoring Albritton to give the Wildcats a 3-2 lead. The Trojans answered with a run in the top of the seventh, but SC was able to score one run on two hits and a walk to take Game 1 by the score of 4-3.

Game 2 was a carbon copy of Game 1. The pitching staffs of both teams limited the offensive production, but a passed ball and a throw to the plate would make the difference.

The Wildcats, having been the home team in Game 1, were the visiting team in Game 2. They struggled to score runs against TC starting pitcher Jacob Mullis. The Trojans got on the board first in the top of the second inning. With two outs, Jonathan Rodgers drew a walk off SC starting pitcher Ashton Goodin. Harrelson then singled to center field, advancing Rodgers to second. Jude King then reached on an error, allowing Rodgers to score the first run of the game. The Wildcats responded in the top of the third. Trypp Lumpkin led off the inning with a walk. Tucker Welch was brought in as a courtesy runner for Lumpkin. Michael Wainwright hit into a fielder’s choice, advancing Welch to second. Garrett Peavy then singled to right field, scoring Welch to tie the game.

The Trojans regained the lead by scoring two runs in the bottom of the third inning. Ramsey Hancock struck out, but reached first base on a dropped third strike. Riley Ray was brought in as a courtesy runner for Hancock. J.J. Collins hit into a fielder’s choice, advancing Ray to second. Blankenship singled, advancing Ray to third. Ray then scored on an error to give the Trojans a 2-1 lead. At his point, Goodin began to struggle. He walked the next three batters and the third walk brought in another run. However, he was able to get out of the jam when he got King to ground out for the third out.

The Wildcats responded in the top of the fifth by scoring a run. Lumpkin led off the inning with a single. Michael Wainwright then singled to right field, advancing Welch to third base. With runners at first and third with no one out, Welch scored on another passed ball and Wainwright moved to third. The Wildcats weren’t able to score any more runs in the fifth, but were able to tie the game in the sixth inning. Taylor drew a walk and advanced to second on a passed ball. After Dylan Windham struck out and Trent Bivins hit into a fielder’s choice, Goodin singled to left field, scoring Taylor to tie the game at 3-3.

For the next three innings, the pitchers on both teams dominated. Neither team was able to break the deadlock until the top of the ninth. Bivins led off the ninth with a double off the left field wall. Goodin then hit into a fielder’s choice, advancing Bivins to third with one out. After Barineau grounded out to shortstop for the second out, Bivins was able to score on a passed ball. That passed ball resulted in the winning run for the Wildcats.

The Trojans tried to respond in the bottom of the ninth to save their season. It appeared they might do that as King led off with a single. This was followed by a double down the left field line by Blankenship, putting runners at second and third with no outs. Coach Cheek decided to make a pitching change and brought in Barineau, who had pitched in Game 1. Barineau was able to get Ramsey Hancock to strike out for the first out of the inning.

J.J. Collins came to the plate with a chance to tie or win the game. Collins hit a fly ball to the center fielder Goodin and King tried to score the tying run from third. However, Goodin threw a strike to Lumpkin, who tagged out King for the game-ending double play.

“We don’t quit. Of all the things I can say about us, it’s the fact that we don’t quit,” Cheek said. “We make plays when we have to.” Cheek went on to say that in retrospect, he might have been better off to go to Barineau earlier, but was pleased with Dylan Windham’s performance through five innings of work. “Dylan came in and he threw so well. He gave us a chance to come back,” Cheek said. “This is probably the best I’ve ever seen Windham pitch. He had earned the right to get back out there.”

Windham came on in relief of Goodin in the fourth inning. He pitched five innings, giving up no runs on four hits and striking out four. Albritton went 2-for-4 at the plate to lead the Wildcats’ offensive attack.

Mullis pitched the entire game for the Trojans. He gave up four runs on seven hits, walked two and struck out four in the losing effort.

The Wildcats improve their overall season record to 24-3, while the Trojans end their season with a record of 16-14.