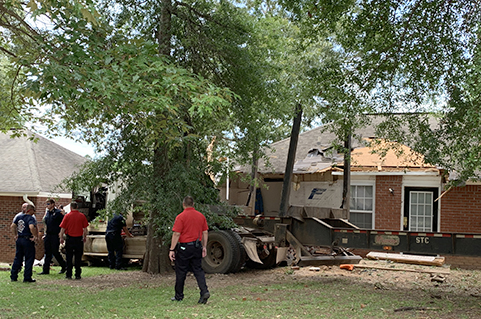 Only a minor injury was reported in this wreck on Thursday. The truck driver, in diverting another disaster, struck two trees and two buildings.

AMERICUS — A hit and run driver was caught a short time after a crash on North Martin Luther King Jr. Boulevard Thursday.

According to the Georgia State Patrol (GSP) Post 10, Americus, which investigated the accident, which occurred around 12:20 p.m. Thursday, Terrance Delano Brown, 54, of 150 Starlight Circle, Americus, driving a 2005 Chrysler PT Cruiser, was stopped at the intersection of Starlight and Martin Luther King Jr. Boulevard (MLK). Meanwhile a 2009 Kenworth tractor/trailer log truck, driven by Christopher M. Fiorillo, 42, of Plains, was traveling south on MLK near Starlight Circle in the outside lane. Brown failed to yield the right of way to the truck and pulled into its path. The truck driver, in an evasive action, turned to the right and traveled onto the west shoulder of MLK, striking a tree before crashing into a residence on Starlight Circle. The truck continued to travel, striking a second tree and another residence on Starlight before coming to a final, uncontrolled rest.

The trooper’s report says Brown left the scene of the accident. Witnesses alerted authorities of the PT Cruiser and direction of travel, and Americus Police Lt. Eric English stopped the car driven by Brown and escorted Brown and the vehicle back to the accident scene. The trooper’s report says Brown admitted to seeing the truck, noticed dust from the crash, and drove away. Brown was handcuffed and taken to the police department where he was charged with hit and run/leaving the scene of an accident, failure to yield after stopping at a stop sign, and driving without license on person, and was released on summons to appear in court.

The truck driver sustained a minor injury, according to GSP, but was not transported for treatment.

Military wife and mother, daughter recall a lifetime of memories

By Lisa Law AMERICUS — While sitting in the sunroom of her villa at Magnolia Manor, Sarah Pitts Bowles, 97,... read more