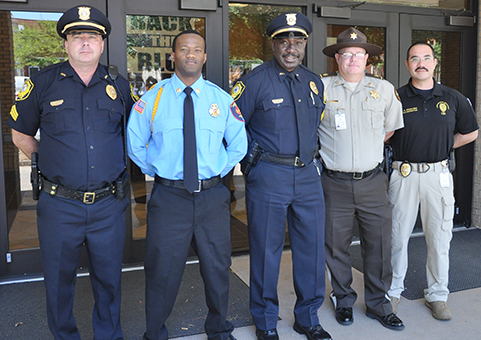 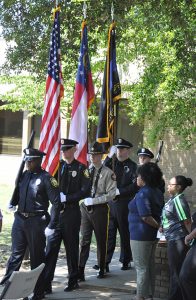 Members of the Joint Honor Guard posted the colors for the memorial ceremony.

Sumter County Sheriff’s Chief Deputy, Col. Eric Bryant, gave the welcome, followed by the invocation by the Americus Police Department’s chaplain, the Rev. David Kitchens. The Posting of the Colors was conducted by the Joint Honor Guard, and Rachel Cochran, a GSW music student, sang the National Anthem. Americus Mayor Barry Blount presented a proclamation by the city of Americus and Sumter County proclaiming May 15, 2019, as Peace Officers Memorial Day, as read by Sumter County Board of Commissioners Vice Chairman George Torbert. 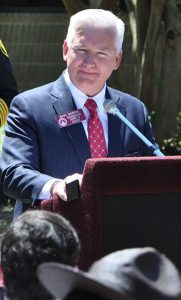 State Rep. Marc Morris, R-Cumming, was featured speaker. His great-grandfather, Officer William R. Morris, who died March 12, 1907, was the first Americus Police officer to be killed in the line of duty.

Guest speaker was state Rep. Marc Morris, R-Cumming, representing House District 26. He is a direct descendant of Officer William R. Morris, the first police officer killed in the line of duty in Americus. He was introduced by GSW Police Chief Mike Tracy.

Morris brought to attention some legislation passed this session in the Georgia General Assembly that protects law enforcement. House Bill 118 deals with “swatting calls,” which are unlawful calls for emergency services. “We were putting our officers, our emergency first responders, and our citizens at risk,” he said. “The penalties, effective July 1, will be raised to a felony, and your local representatives (Mike Cheokas and Ed Rhynders) worked with me with getting it passed through the House and the Senate.”

Morris explained that Americus was his father’s home until he retired to Brunswick. He recalled coming to visit his grandparents in Americus at least once a month while he was growing up.

Morris said he came into the General Assembly for a special session in 2018, and as he met more people, he ultimately met former state Rep. Bill McGowan, D-Americus, who introduced Morris to Americus Police Chief Mark Scott. The chief shared the family history of Morris’ great-grandfather, Officer William R. Morris, who died in the line of duty on March 12, 1907. 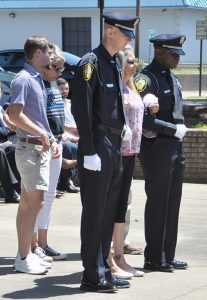 Americus Police Officers Charles Kinnamon, at left, and Printavious Powell, at right, escort members of the family of Office Nicholas Smarr, who was killed in the line of duty on Dec. 7, 2016.

Morris said he knew his great-grandfather had served on the police force and was killed in 1907, but he did not know that he was the first Americus Police officer to die in the line of duty. “My great-grandfather’s death epitomizes the great dangers that law enforcement officers still face on a daily basis. He was responding to a domestic disturbance call. It was a man that he knew, a man that was intoxicated,” he said.

Morris related that a family member, possibly the man’s mother, had concerns about the intoxicated man, and called for help from the police. He said during those days, cops walked their beats, and during cold weather, carried their weapons in their overcoats, on the front because they didn’t have holsters. “William’s {his great-grandfather} revolver was never drawn,” Morris said. “He simply walked into a bedroom to approach someone who he was familiar with, 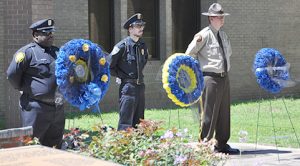 struck a match to illuminate the room, and the perpetrator shot and mortally wounded him.”

Morris said that family stories don’t always remain accurate as they’re told and retold from one generation to the next, “but I do know that an aggressive manhunt was ensued to find this killer and it ended very violently. And two loves were lost in that event.

Morris said his grandfather’s decision to join the police force was not based on his desire for vengeance or revenge. “To the best of my knowledge, he only discharged his weapon once during his entire career, and then he received a commendation for action for protecting lives. His actions, like others’ since, seemed to be more about providing a gap provided by his father’s senseless murder. I’ve often wondered what it must have been like for his family — his mother, his siblings, his wife, his children — knowing first-hand what danger he would face on a daily basis.

“I’m sure these are similar to the same fears our officers’ families face today. Because you see, it’s not just the … officers who serve, it’s the entire family. It’s family service. These families know that it will be the officer who will run into the places that others flee. That they will be alone on a dark road in the middle of the night stopping a suspicious vehicle. That they will go into a dark building … and that many times they will be the one person that stands in-between evil and innocence. And they return home at the end of the day knowing that they protected their community through their actions and their presence. Then there’s one day, when the one does not return.”

Morris said that on that day, “We all ache. We all stop. We lower flags. We mourn. Some cynic might say, ‘is one life more important than another?’ And the answer to that is, ‘of course not; all lives valuable.’ But we’re a nation of laws, and when one who wears the uniform is attacked, it’s really an attack on our core values, the very bedrock of our society. In many ways, the uniform is more than the individual. It represents the very things that we stand for.

“St. Augustine wrote: ‘No man is due a eulogy who simply did his duty and no more.’ These men, these women that we pause today to remember, did their duty and much, much more. May their names always be on our tongues. God bless this community, our state, and the United States of America.” 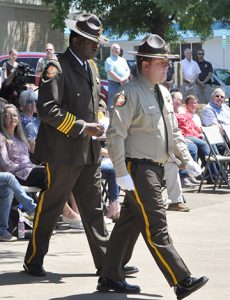 From left, Sumter County Sheriff’s Col. Eric Bryant and Deputy Brandon Glover, Deputy of the Year, approach to commemorate former Sheriff John Kimmey, who died in the line of duty on Dec. 11, 1889.

Following Morris’ speech, the memorial portion was held. Each local law enforcement agency placed a wreath in front of the Public Safety Building and the names of those officers killed in the line of duty in Americus and Sumter County were read by Chief Scott.  Family members of the fallen officers were invited to place a carnation on the agency wreath as each name was read to commemorate their loved one.

The fallen officers honored, in addition to Morris, were: 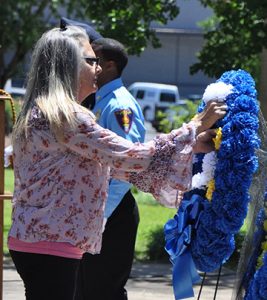 Janice Smarr, mother of the late Americus Police Officer Nick Smarr, places a carnation on her son’s wreath during the memorial ceremony.

After each fallen officer’s named was called and the date of death, the bell was sounded for their end of watch.

In his closing remarks, Chief Scott thanked everyone for being there. “I don’t think there’s another community in this state, or even in this country where the citizens support law enforcement and public safety the way this community does, and we thank you and we appreciate it.

“As we remember those who have fallen, we ask that you also remember those who are at work today. They’re out there every day, wearing the badge and working to keep this community safe … and a better place to live because … we’re all citizens of this community, and we all care. We all want to leave this a better place than it was when we are gone.

A closing prayer was given by the Rev. Bud Womack, chaplain, Sumter County Sheriff’s Office, followed by the playing of Taps.