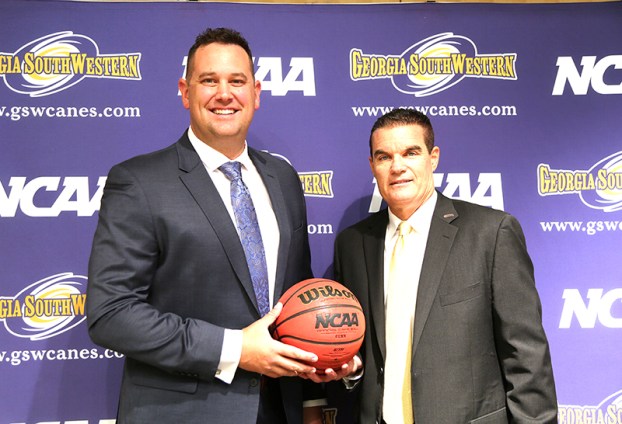 AMERICUS – A new era in Georgia Southwestern State University men’s basketball officially began on Monday afternoon, June 10, as Aaron Coombs was hired as the next head coach of the GSW men’s basketball team. Coombs replaces former GSW head coach Ben Hicks, who resigned at the end of the 2018-19 season to pursue other professional opportunities.

“It is truly a great day to be a Hurricane,” GSW Athletic Director Mike Leeder said. “ We started the process about five weeks ago to look for a third men’s basketball coach in the NCAA Division II era. We were hoping to find somebody that had successful experience as a four-year head coach, while also having some experience at the Division II level. I think we certainly found such a man in Aaron Coombs.”

Coombs comes to GSW from Oklahoma Panhandle State University, where he completed his first and only season at the helm for the Aggies. In his one season as head coach at OPSU, Coombs guided the Aggies to a 16-14 overall record and a conference playoff berth for the first time since the 2005-06 season.

“We want to compete for championships. We don’t want to shy away from that,” Leeder said. “I think that is a reasonable expectation here. In the time that I had a chance to visit with Aaron, I could tell that we share a similar vision in how we are going to go about getting there.”

“I feel very honored to be here today. I feel very privileged to be chosen to lead this program for the foreseeable future,” Coombs said. “First and foremost, I just have to thank God for everything that He continues to do for my life and my family. It’s just blessings a new each day. I’m incredibly excited to become the next head basketball coach at Georgia Southwestern. Dr. Neal Weaver and AD Mike Leeder have created a culture of excitement, passion and an expectation of winning. I cannot wait to get started and help build a program that follows their lead.” 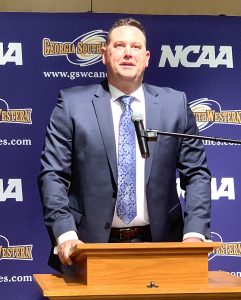 Coombs said that he plans to instill passion in the GSW men’s basketball program. “When we meet with our guys in the next couple of months, they’re going to learn real quick that when it comes to basketball, they’re going to be passionate about the whole process,” Coombs said. “Passion about the process was something that was instilled in me since I was a college player and I believe in that to my very core. We’re going to be passionate about winning and what goes into winning. Winning is hard. It’s not something that you can just show up one day and it happens. It’s something that you have to invest in.”

Coombs went on to say that he plans to instill toughness in his basketball team. “That’s one of the things that I pride myself on as a coach,” Coombs said. “Everyone has their own definition of toughness, but when it comes to basketball, toughness is on the floor first for loose balls. Toughness is taking charges. Toughness is blocking out for a rebound. Even something as simple as showing up on time takes a little bit of toughness. That’s something that is going to be incredibly valued and incredibly important in my program.”

Coombs also said that he expects his players to give back to the university and to the city of Americus and not just be takers. “We want to give back to the community of Americus,” Coombs said. “We want to spread our time and our effort to give back to the community. One thing our guys are going to learn a lot about is giving. We’re not going to be takers. Some of the responsibility as a scholarship athlete is to give back and not just take, take, take. The men’s basketball program will be very giving with everything that goes into Georgia Southwestern.” Coombs went on to say that when people give, that’s when success follows. He plans to instill that principle into his team.

Coombs also wants to foster a spirit of togetherness amongst his players. “One of the things I learned when I played at UNC Wilmington is how important it is to have chemistry,” Coombs said. “One of the biggest blessings in my time as a college athlete was that I went to school without cell phones. Cell phones isolate you. When I played, we literally did everything together. It was a major reason why we were so successful.”

Prior to being named the head coach at OPSU, Coombs served in the NCAA Division II ranks at Missouri Western State University from April 2013 to March 2018. During that time, he gained valuable experience that prepared him to lead a program.

As a college player, Coombs had an impressive NCAA Division I playing career at the University of North Carolina-Wilmington. During his four-year career at UNCW, Coombs started 45 games for the Seahawks and earned the Colonial Athletic Association Most Improved Player Award in 2005. He was also a member of the 2002 and 2003 UNCW teams that won conference championships and appeared in both the 2002 and 2003 NCAA Tournament. In 2002, the Seahawks pulled off a huge upset in the first round of the NCAA Tournament when they toppled the heavily- favored Trojans of the University of Southern California (USC) 93-89 in overtime.

Coombs was also named an NSCA Strength and Conditioning All-American in 2004.

At the professional level, Coombs spent five years playing professional basketball in France, Romania and China and was the leading scorer on all three of the teams he played on. He was also named the Most Valuable Player while playing in Shanghai.