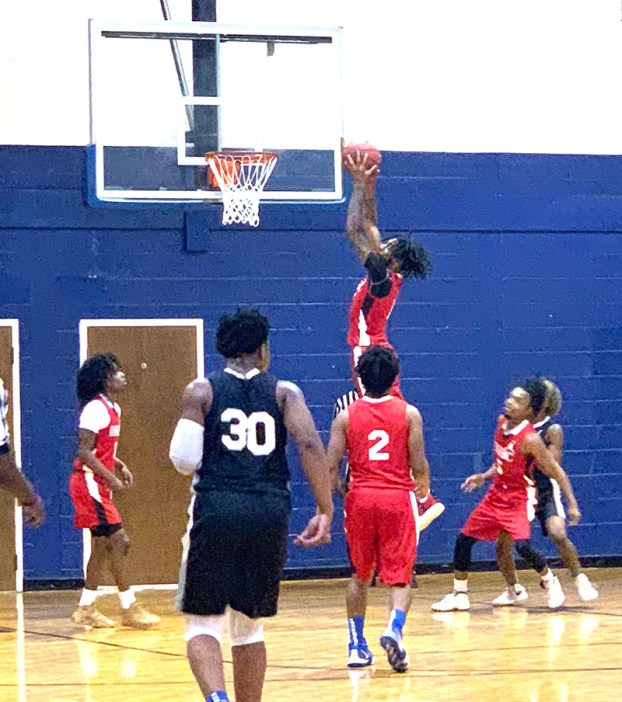 Rockets forward Shomari Gaines goes up for a rebound against the Raptors. Gaines scored 10 points in the 54-52 win. Photo by Ken Gustafson

AMERICUS – The 17u Rockets used a 9-0 run midway through the second half as a catalyst for a 54-52 come-from-behind victory over the Raptors in the 17u division of the Dwight Harris Boys Club Basketball League (DHBCBL) on Wednesday, June 12, at Ninth Grade Academy.

“We tried to limit our turnovers. I felt like that team couldn’t stay with us,” Rockets head coach Corby Moore said. “Due to the fact that we had so many turnovers, 22 in total, that enabled us to catch up and take the lead.” 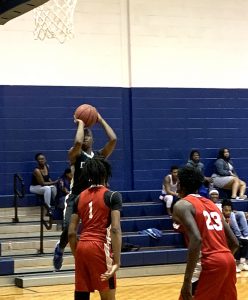 The Rockets had three players in double-figures. Shooting guard Owen Exley led the Rockets with 14 points. Exley scored 12 of those points on four three-pointers. Pete Banks scored 12 points and Shomari Gaines chipped in 10.

The Raptors were led in scoring by Jaheem Banks with 25 points. Le’Shannon Ross scored 12 points on four three-pointers.

The Raptors were in control for much of the first half and led at halftime 35-28. The Raptors outscored the Rockets 8-6 during the first five minutes of the second half to take a 43-34 lead. Jaheem Banks capped off the run with a three-pointer with a little less than 15 minutes left.

However, the Rockets responded with a 9-2 run to tie the game at 45-45 with 5:11 to go in the game. The Rockets eventually took a 49-47 lead with under three minutes to play and would not relinquish the lead for the rest of the game. Both teams traded baskets during the next minute or so, and the Rockets led 54-49. 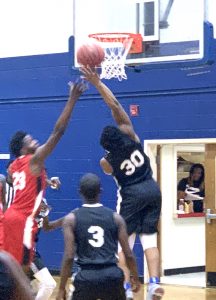 Jaheem Banks hit a three-pointer at the buzzer to cut the lead to two, but it would not be enough as the Rockets (3-2) escaped with a come-from-behind 54-52 win.

With the loss, the Raptors drop to 3-3 on the season.

AMERICUS – There’s an old saying that goes like this: ‘When one door closes, another one opens.’ That is what... read more