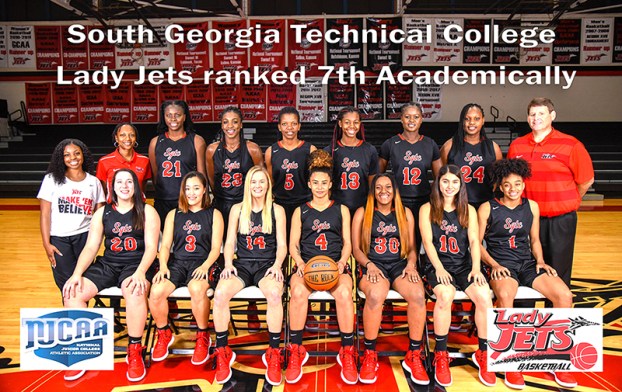 AMERICUS – Smart and talented: Those are the two words that describe the South Georgia Technical College (SGTC) 2018-19 Lady Jets basketball team. The National Junior College Athletic Association (NJCAA) 2018-19 Academic Teams of the Year were recently released, and the SGTC Lady Jets were ranked seventh in the nation in NJCAA Division I women’s basketball for their academic performance with an overall GPA of 3.61 on a 4.0 scale.

“What an incredible testament to our young people and their work ethic, not just on the court, but more importantly, in the classroom,” SGTC athletic director and women’s head basketball coach James Frey said. “We talk about the importance of their degree daily. We talk about their lives five to 15 years down the road and how important it is to do well academically now so they can reap the rewards professionally then.”

All 27 of the NJCAA certified sports were recognized with a team champion. Western Technical College in La Crosse, WI was the 2018-19 NJCAA Women’s Basketball Academic Team of the Year with an overall GPA of 3.72. Northwest Mississippi Junior College, Miles Community College and Snow College all tied for second place in women’s basketball with an overall GPA of 3.69.

“It’s great to win 30 games and we’re proud of all that,” Frey said. “Assistant Coach Kezia Conyers and I get so much out of watching these young ladies buy into our academic message more than they do our athletic message. They are all good players and athletes when they arrive, or they wouldn’t be here.” Frey went on to say that many of his players are pretty good students, but for them to have a GPA over 3.6, they have to be more than just pretty good. “You really have to apply yourself and work at it,” Frey said.

According to Frey, this was the third consecutive semester that the SGTC women’s basketball team had a team GPA higher than 3.25. “Honestly, I’m incredibly proud of our young ladies for understanding how important it is to be a student-athlete,” Frey said. “The first thing four-year universities ask me when they call is how are they academically. It always feels good to say they will have over a 3.0 GPA and graduate on time in the spring.”

Willoughby and Brown lead 17u Bucks to DHBCBL victory

AMERICUS – The July 4 holiday began early with some fireworks in the form of exciting end-to-end basketball on Tuesday,... read more