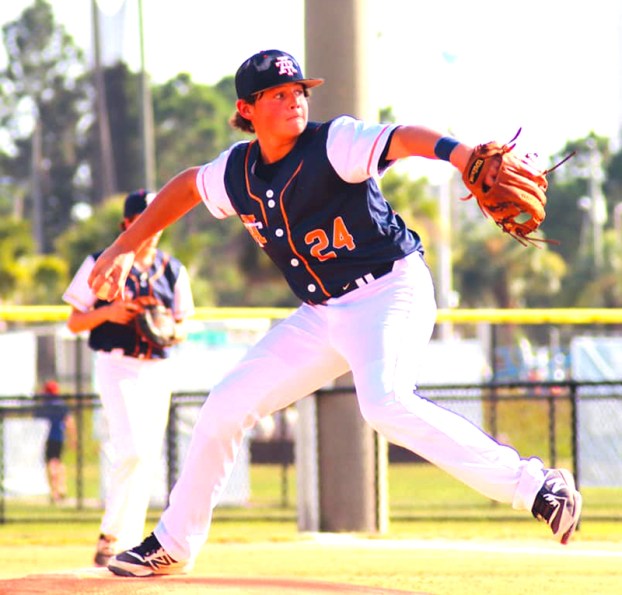 Jaxson Haire gave up one run on seven hits to help lead the Americus Travelers to an 8-1 victory over the Red Stitch 108 baseball team from Knoxville, TN in the 2019 Grand Slam World Series of Baseball. Haire walked three batters and struck out three. Photo by Angel Lamb

PANAMA CITY BEACH, FL – The Americus Travelers 14u travel baseball team continued their run towards a national championship by defeating the Red Stitch 108 baseball team from Knoxville, TN by the score of 8-1 on Wednesday, July 3, at the Grand Slam World Series of Baseball in Panama City Beach, FL.

Chase Ledger went 3-for-3 with a double, scored a run and drove in two RBIs. Jack Clark also had a good day at the plate. Clark went 2-for-3 and singled in a run in the bottom of the fourth and drove in a total of three RBIs. Both of Clark’s two hits came with two outs

Jaxson Haire pitched the entire game for the Travelers and was dominant on the mound. Haire went six innings and allowed one run on seven hits. He walked three batters and struck out three.

“Jaxson Haire really had good command of all three pitches today,” Americus Travelers head coach Tim Estes said. “This was his best outing of the year and it came at a great time for us.”

The Travelers scored eight runs on 10 hits and played errorless baseball. On the other hand, they were able to take advantage of four errors committed by Red Stitch 108.

After three scoreless innings, the team from Knoxville took a 1-0 lead in the top of the fourth inning. However, the boys from Americus responded with two runs in the bottom of the fourth to take an early 2-1 lead. They scored two runs on two doubles by Haire and Ledger, as well as an RBI single by Clark.

The Travelers blew the game open in the bottom of the fifth. They scored six runs on five hits and took advantage of two walks and an error. That six-run fifth inning would seal the deal for the Travelers.

“To compete and win at this level against teams from all over the country, you have to be well prepared and I felt like our coaching staff has done a good job of preparing them,” Estes said. “We’ve also played such a tough schedule that we are use to playing quality teams.”

Estes went on to praise the fan support that the Travelers have gotten during the last couple of months. “We definitely have an incredible fan base,” Estes said. “Our crowds have been great. We are going to have 50 to 60 fans at each game and we appreciate their support. We’ve also got a great following on social media.”

At 3-0, the Travelers are still in the winners bracket. They will take on the Ironmen Midwest White team from Cincinnati on Friday, July 5, at 7 p.m. EST. If they win that game, they will then take on the winner of the game between the Oklahoma Mudcats and Diablos Gold on Saturday, July 6, at 11 a.m. EST. Should the Travelers win on Friday, they will be two wins away from claiming the club’s first national championship since 2007.

From Staff Reports   AMERICUS – Smart and talented: Those are the two words that describe the South Georgia Technical... read more