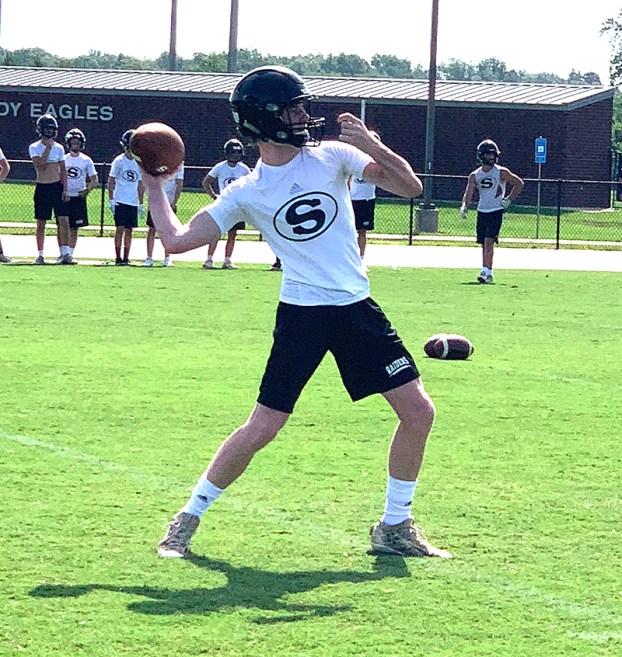 It’s about getting better: Southland and Marion County both benefit from seven-on-seven practice

BUENA VISTA, GA – During the summer months, high school football teams across the country are not taking it easy. Instead, they are conducting summer workouts within their own teams, as well as perfecting their skills and practicing their schemes against other teams to get ready for their seasons this coming fall.

Such was the case on Thursday, July 18, when members of the Southland Academy football team (SA) traveled to Marion County High School in Buena Vista to conduct a seven-on-seven practice with the Eagles. 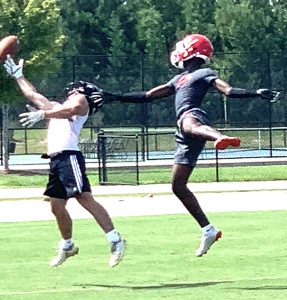 For SA head coach Rod Murray, it was all about getting better and improving for the upcoming 2019 season. For Murray and his club, MC head coach Chris Kirksey and his club always provide the necessary challenge they need to up their game and they do it in a positive setting.

“Anytime we come over here with Coach Kirksey and this crowd, they do things the right way,” Murray said. “We’re happy to be able to work with them. We got better today and I know that they did too so it was a very successful day. We got a lot of kids a lot of reps, which was a goal. They’re starting to hear how we communicate pre-snap, post-snap, so it was a good day.”

The practice was just for the quarterbacks and the skilled players (wide receivers and defensive backs) with no offensive or defensive line players. The day began with wide receivers and cornerbacks for both teams going against each other in one-on-one drills. Then it proceeded with two-on-two drills. Later in the day, both teams practiced seven-on-seven. 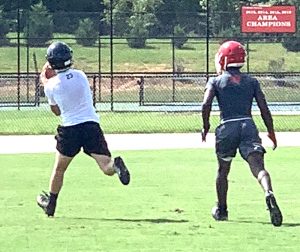 SA junior Nathan Duke is currently listed as the backup quarterback behind senior Landon Law. Being that Law was on a family vacation, Duke got some valuable reps at the quarterback position during the practice that will serve him well down the road. He was very pleased with how the practice was going for him and he was pleased that a lot of younger players were getting valuable experience. “The young guys are getting a lot of experience and we’re able to get a lot of different reads and different scenarios,” Duke said. “It’s helping with experience so when it gets to the game time, we’ll know what we are doing and have a better idea of how to cover and read and make the different switches on the different routes.” 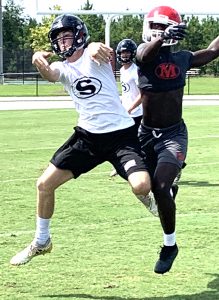 Senior running back Clay Owens is about to embark on what will probably be a record-breaking season. He is very close to breaking both the school’s all-time rushing record and all-purpose yards record, but first, he wanted to perfect his skills on both offense and defense. He will be expected to make catches out of the backfield, as well as be a lock-down defensive back. For him, the seven-on-seven practice against MC, along with the summer workouts, have really helped him and his teammates get focused on the task at hand this fall. “Today is going good. Everybody is giving 100 percent…trying to get better,” Owens said. “Workouts are going good. Everybody is showing up…lifting hard, working out hard. Everybody is just ready to play.” While he is happy with his own dedication this summer, as well as that of his teammates, Owens knows that there is always room for improvement. “Our pass play needs to be a little better. We’re working on running our routes better, catching the ball better and just competing,” Owens said. 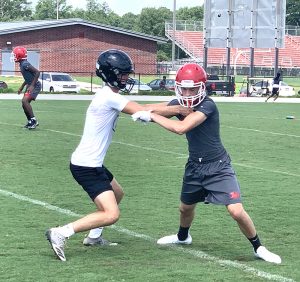 On the defensive side of the ball, SA senior middle line backer Hunter McCain is preparing to have an outstanding senior season. For him, the seven-on-seven practice with MC is about one thing. “We’re just trying to work hard, progress and get better,” McCain said. McCain went on to say that working against the receivers of MC has taught him that he simply needs to be fast and play hard.

Thursday’s practice with MC is the first of two seven-on-seven practices between the two teams. The Raiders will once again make the trip to Buena Vista on Tuesday, July 23, for another seven-on-seven practice. It is all part of the process to help both teams get better and improve so that they will be ready to shine under the Friday night lights.

The 2019 Atlanta Braves appear to be well on their way to winning another division championship. They are currently in... read more