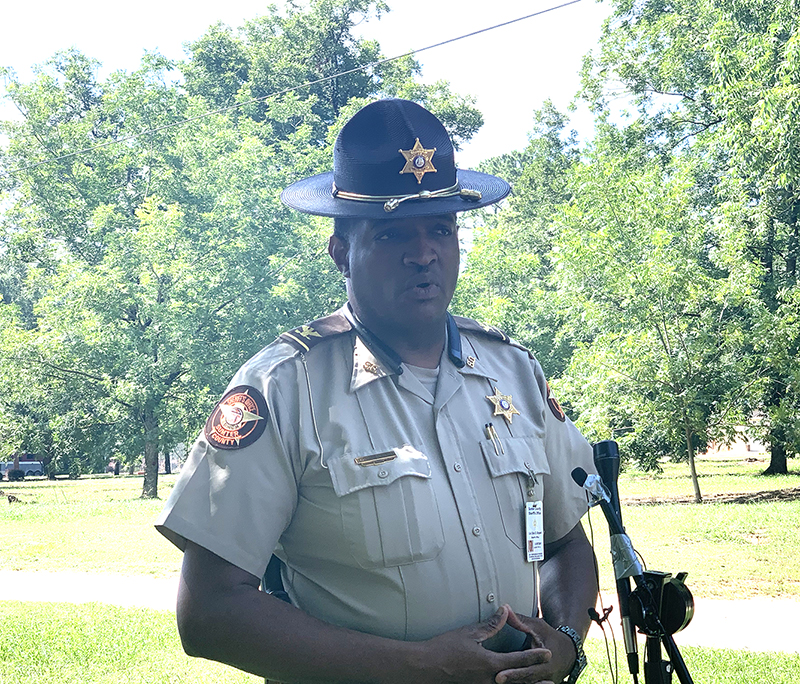 Col. Eric Bryant, Chief Deputy of the Sumter County Sheriff’s Office, speaks at a press conference Wednesday afternoon regarding a plane crash that took place on Wednesday morning, July 24, at Horne Farms, located on Old Andersonville Road in Andersonville. According to early reports, the crash claimed the lives of the two people who were aboard. Photo by Ken Gustafson

AMERICUS – he wreckage of a plane crash was discovered on the morning of Wednesday, July 24, on the premises of Horne Farms, about a mile north of the Jimmy Carter Regional Airport.

At a press conference held at 4 p.m. Wednesday, Col. Eric Bryant, chief deputy of the Sumter County Sheriff’s Office (SCSO), said that the local 911 center received a call at approximately 9:30 a.m. Wednesday. The caller stated that he had discovered what appeared to be the wreckage of a downed plane. Bryant stated that first responders arrived at the scene, where they found the wreckage of a small engine plane that had crashed in a pecan orchard at Horne Farms, located at 303 Old Andersonville Road in rural Sumter County. According to Bryant, the wreckage was beyond recognition.

“We were able to tell that it was in fact a small engine plane,” Bryant said. “We have currently on scene, along with the sheriff’s office, Georgia Bureau of Investigation, along with the FAA and the National Transportation Safety Board (NTSB) is also on the scene. We’re working with all of those agencies to identify first the plane and also, unfortunately, the two victims that were also in the wreckage. At this point, we are working with all of those entities to help properly and to positively identify the victims in the wreckage.”

Bryant went on to say that the scene would be active throughout Wednesday evening and probably well into Thursday morning until investigators are able to make a 100 percent identification of the plane and its occupants. According to Bryant, the investigation has so far revealed that there were only two victims in the plane when it crashed. “We’ve been working with our local airport, as well as neighboring airports, to secure information on what flight or what plane that might have been moving around early this morning,” Bryant said. “The 911 call again came in at 9:30 a.m. and the wreckage was discovered by workers here at the farm located here on Old Andersonville Road,” Bryant said.

Bryant said that the SCSO is working with state and national agencies such as the GBI, the FAA and the NTSB to identify the victims and to properly notify the families. However, that has not been done yet because they are still trying to identify the plane and its occupants.

Bryant said that the cause of the crash has not yet been determined and that the FAA and the NTSB are helping to try to figure out what might have happened. He also stated that there is a possibility that no one heard the crash. “We are trying to narrow down the time frame in which this incident might have occurred,” Bryant said.

Bryant was asked if the plane was coming into the area or departing. He replied that at this point, investigators are not sure, but that the SCSO is working with local airports to see whether or not they had any flight plans slated for Wednesday. “We don’t know if this was a plane that left here in Sumter County, or if it was a plane that was going through. At this point, we’re working to try to make that determination,” Bryant said. He added that the SCSO, the GBI and the FAA are all currently on the scene and that a representative from the NTSB is en route to the crash site.

Bryant said the SCSO is dealing with the challenges brought on by speculation and rampant rumors regarding the crash. “Unfortunately, we do have several local pilots that live here in Sumter County, so of course, their families are very concerned as to whether or not it may be their loved ones,” Bryant said. “But of course, until we positively identify these victims, therefore, we haven’t notified anybody.” Bryant went on to say that the community is on edge about the crash and who the victims might be.

Bryant said that weather is being looked at as one of the possible causes of the crash. “I can tell you that the two agencies that are coming in, that will be one of the things they’ll be looking into,” Bryant said. “Of course, I’m not sure whether or not there were rainy conditions this morning.” Bryant went on to say that both the FAA and the NTSB will try to figure out what the weather conditions were like at the time of the crash and whether or not weather played a role.

Bryant also stated that due to the extent of the wreckage, the gender of the victims has yet to be identified. “We want to wait until the proper identification has been done through forensic examinations,” Bryant said. As to how large and widespread the debris field is, according to Bryant, it’s the size of a football field.

According to Bryant, before Wednesday fatal plane crash, the last plane crash that the SCSO investigated occurred about four to six months ago at an “aircraft hobby field”. That plane was a small single-engine plane and the victim survived that crash. Bryant added that when more information is available, the SCSO would make that information available.

Stay tuned to the Americus Times-Recorder for more updates as more information is released. 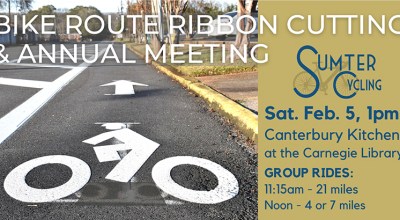