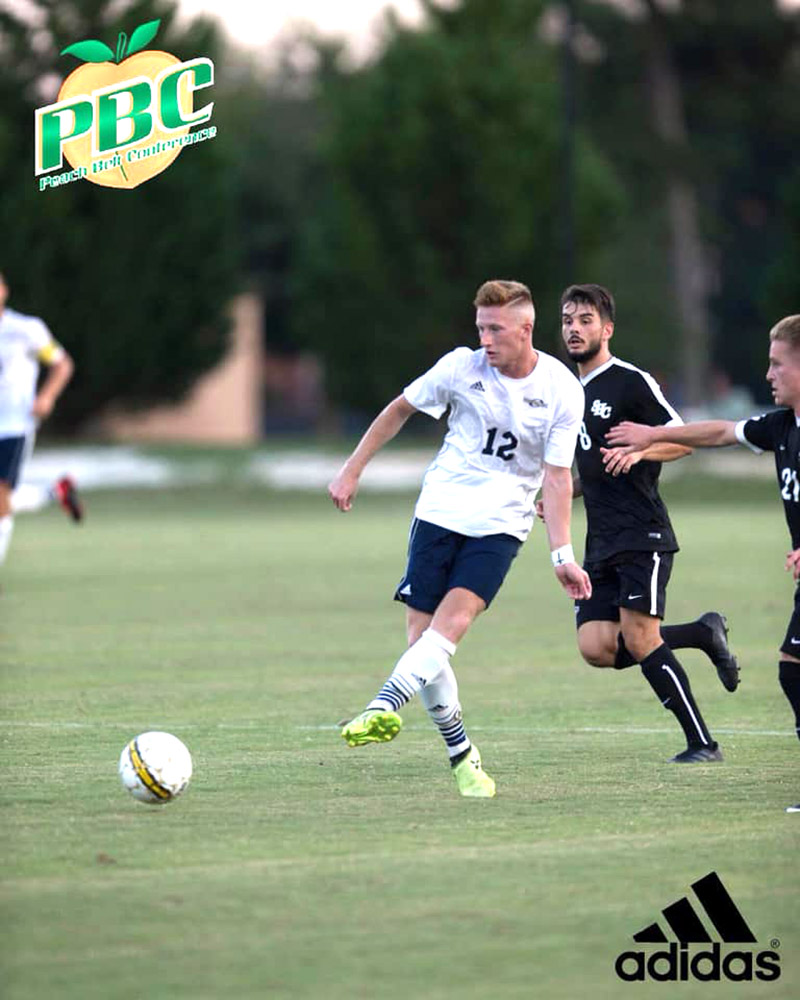 GSW senior midfielder Caleb Zolman is one of 10 proven returners the Hurricanes will count on this season for leadership on and off the field. Photo by GSW

AMERICUS – In a little less than a month, the Georgia Southwestern State University men’s soccer team will launch the 2019 season with a home game against Brewton-Parker College on Thursday, September 5.

About 20 new players will be joining first-year head coach Eric Crawford’s squad, along with 10 returning players. Coach Crawford is excited about how the team has progressed since spring practice and about the potential for excellence that lies ahead. Many of the leaders on the team will be transfer players, along with some of the returners. “This year is going to be a little different in terms of senior leaders. We’ve brought in a lot of transfer players,” Crawford said. Crawford went on to point out that senior midfielder Rafael Faria did a great job during the spring of getting up to the standards that he wanted in a short period of time. Crawford also praised the leadership of senior midfielder Caleb Zolman and senior defender J.P. Merlet for organizing team activities.

However, it’s a new year and a clean slate. According to Crawford, no one is guaranteed a spot on the field. “We’re bringing in about 20 new guys. All these seniors know that it’s a fresh start and they’ve got to earn their place from Day one,” Crawford said.

As far as tactics are concerned, Crawford said that the formations that the Hurricanes will employ on the field will depend on the type of personnel that he has. “Obviously, I’ve got formations that I trust and I know, but one of the key things with me is that I’ve been very flexible over the course of coaching, as well as playing,” Crawford said. “I tell everybody when they get here that the 11 best players will play. My job as the coach is to find a system that’s suits our 11 best players and gets them all on the field at the same time.”

Crawford went on to say that he would like to play a 4-3-3 formation (four defenders, three midfielders, three forwards), but he added that it could turn into other formations depending on the type of personnel the Hurricanes have.

The Hurricanes will once again be tested with a tough Peach Belt Conference (PBC) schedule. According to Crawford, the NCAA Division II preseason national rankings recently came out. Two PBC members, Young Harris College and Lander University, are ranked in the top five nationally. “We know that we’re in one of the premiere conferences in Division II. We know what we’re up against,” Crawford said. “I’ve been to the tournament. I’ve seen the mountaintop. I know the kind of level these teams are going to bring. The goal is to get us there and try to get us there as quickly as possible. We know that based on where we were in the conference last year, based on our history, that nobody is expecting a lot from us. Our goal is to try to change the perception around GSW soccer.”

While Crawford realizes that qualifying for the PBC Tournament is a lofty goal based on the program’s recent history, he believes that it is an achievable goal and that is what he and the Hurricanes will be striving for. “I think just based on the guys coming in and how fit we were coming out of the spring, as well as the returning players upping their level to match what I want, I think that it’s something that we’re definitely shooting for…getting into that conference tournament.” Crawford went on to say that the GSW baseball and softball teams were able to qualify for their conference tournaments. He sees no reason why the GSW men’s soccer team can’t do the same.

Several transfer students are joining the squad this year. A couple of them are transferring from NCAA Division I programs. “I think they will add a level of professionalism…just a level of work rate that will up us at practice,” Crawford said. “Obviously, we think these are guys that can get on the field right away.”

Crawford went on to say that he has brought in some bigger players to help the Hurricanes compete at the NCAA Division II level. There are five junior college players that will be joining the Hurricanes, including three players from the University of South Carolina Salkehatchie (USCS). One of the USCS transfers is junior center midfielder Raschaad Buchanan. According to Crawford, Buchanan will provide a big, physical presence in the midfield. “He’s something that I don’t think we’ve seen here before. He’s a big fellow,” Crawford said. Another USCS transfer that Crawford is excited about is junior Raheem Alcock. Alcock is another big player that is quick and great on the ball. According to Crawford, Alcock will be one of the center backs for the Hurricanes this year.

Crawford also mentioned that the returning players on the roster should also be able to contribute and that several of these players have made drastic changes to their physique since he arrived back in February. “They’re doing more running. They’re just fitter. They’re ready to go,” Crawford said. “I think that even some of the guys that were kind of discounted last year will come back stronger this year and they’ll be pushing for spots on this field.”

Crawford went on to say that while some players will be able to contribute right away, others will have to be brought along slowly. “I think every player needs to have a progression and kind of know what their timeline is in terms of whether they’re a player for now or whether they’re a player for the future,” Crawford said. “I love the skill development aspect of coaching so there are going to be guys that we are bringing along slowly to contribute two years down the road. This is not going to be a flash in the pan. We want sustained success.”

To sum it up, Crawford is excited about the possibilities for this season and for the years to come in the GSW men’s soccer program. It all gets underway Thursday night, September 5, against Brewton-Parker at Hurricane Field. Kickoff is scheduled for 7:30 p.m.