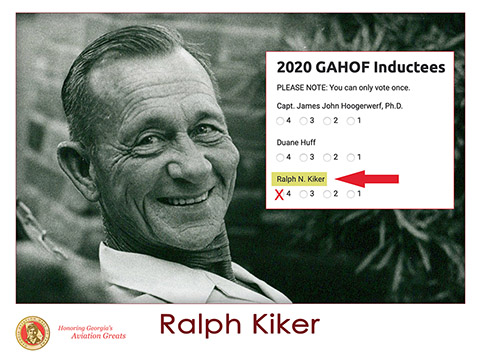 Ralph Kiker, a former flight instructor in Americus, is one of 10 nominees for the 2020 Georgia Aviation Hall of Fame. Anyone can vote on the nominees. You can only vote once. There are pilots in the Americus and Sumter County area who will remember Kiker.

Please select four (4) candidates only and place a value of 4, 3, 2, 1 for each person. The number 4 will represent your top selection. Your scoring should total 10. Inductees are chosen by the largest number of voting points.

According to Kiker’s bio on the GAHOF website, he was born July 14, 1913 in Americus, and  learned to fly from Andy McIlwrath in 1935. Kiker took over the Americus Municipal Airport in 1938, when McIlwrath went to work for TWA.

“Kiker was recruited by the Army Air Corps as a civilian pilot in December 1937. He was sought after for his great aviation skills that he acquired at the Americus Municipal Airport. He then became a flight instructor at the airport in 1939. In 1940, he was chosen as CAA Flight Instructor at Georgia Southwestern College in Americus. The USAAF recruited Kiker as a flight instructor at the Army Air Corps Base Souther Field, which was used as a training facility for England for both British and American pilots. Kiker continued to work at the Americus Municipal Airport during this time.

“From 1941 to 1944, Kiker worked for Graham Aviation assigned to Army Air Corps 56th Flight Detachment Group Commander at Souther Field. He instructed hundreds of cadets to fly including R.A.F. cadets. Frank Cardamone remembered Ralph Kiker as one of the greatest pilots ever. During the years of 1945 through 1948, Kiker worked to get the trade school aircraft mechanic course (for what is now South Georgia Technical College) established while he also laid the groundwork for what is now the current airport — Jimmy Carter Regional Airport. He also acted as an airplane sales broker-selling surplus — PT13s and gliders from surplus.

Kiker played a major role in working with the airport authority to get the runways paved between 1957 and 1961. In 1961, the grand opening was held for the Americus Airport complete with state of the art lighted taxiways and runways that were extended to accommodate larger planes that used radio navigation equipment. The runways were paved and modernized into the pattern you see today which Ralph Kiker laid the roots for so many of those improvements.

“Kiker also took one of the abandoned air corps buildings and used it as a hangar and gunsmith shop. He was renowned as an exceptional gunsmith. He always had a gunsmith shop next to the hangar, sometimes using it to dope airplane wings. The hangar later became the present location of the current airport. In 1945, the hangar from the old Americus Municipal Airport was moved from its location on South Lee Street to the current location at Souther Field. The airport modified the hangar and renamed it after Kiker in 1986.

“Kiker worked every day of his life at the Americus Municipal Airport except the occasional Christmas Day. Although, it wasn’t really work for him, as he loved every second of flying and being a part of the airport. His wife was quoted in 1990, as saying, ‘It was the airport/flying, the dogs/horses, the guns, and then me, that’s just the way it was.’

“He was a one of a kind personality and his grandson, Greg Whitaker, is quoted as saying, ‘Trying to define Ralph’s spirit in aviation is almost impossible to capture on paper.’”

Woman in HIV video to be charged

By Beth Alston   AMERICUS — During the investigation into a video shown on social media by a woman claiming... read more