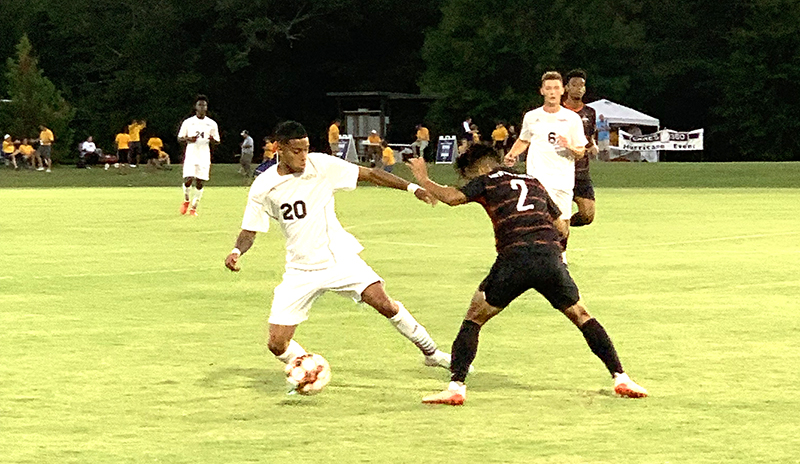 GSW junior forward Bryan Zuniga (20) seen here with the ball in the Hurricanes’ season opener against Brewton-Parker College. Zuniga assisted on Divin Moke’s goal in the 35th minute to give the Hurricanes a 1-0 lead against Middle Georgia State. ATR Archive

COCHRAN, GA – Coming off an exhilarating 2-1 win over Brewton-Parker College in the season opener on Thursday, September 5, the Georgia Southwestern State University men’s soccer team (GSW) headed up to Cochran, GA with hopes of earning a victory against Middle Georgia State (MGA) on Tuesday, September 10. Unfortunately for the Hurricanes, they surrendered the golden goal (sudden death goal) in the 101st minute and suffered a 3-2 double-overtime loss to the Knights in their first road match of the season.

The Hurricanes struck first when junior forward Divin Moke found the back of the net in the 35th minute off an assist from junior forward Bryan Zuniga for the seventh goal of his career. MGA got the equalizer four minutes later when Marcos Garcia scored to tie the match at 1-1.

The Knights took the lead late in regulation when Callum Bryan was able to collect a loose ball as a plethora of players were scrambling for it. Bryan then was able to score to give MGA a 2-1 lead.

However, GSW junior forward Sean Mckeever was able to get the equalizer for the Hurricanes two and a half minutes later. The match went into over time, but neither team could get the golden goal in the first overtime. Therefore, a second overtime was needed to decide a winner.

Just 51 seconds into the second overtime, the Knights were able to get the victorious golden goal when Alejo Bzuroski scored. The Hurricanes had fallen in double-overtime by the score of 3-2.

MGA finished with 11 shots on goal, while the Hurricanes were held to five. The Knights held a slim 5-3 advantage in corner kicks, while both teams combined for 31 fouls in a very physical match.

GSW will try to bounce back from this setback when they host Faulkner University on Saturday, September 14. Kickoff is scheduled for 5 p.m.