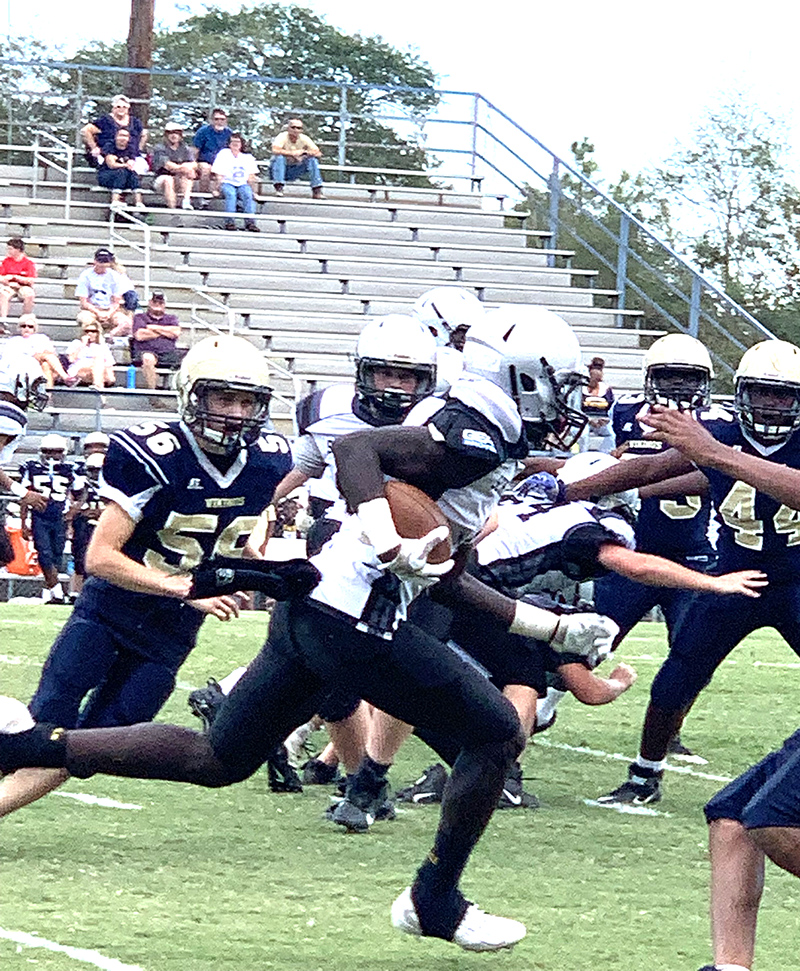 BUTLER, GA – The Schley County Middle School football team (SCMS) finished the 2019 regular season by doing what they’ve been doing to their opponents all season long. Running back Jalewis Solomon scored three rushing touchdowns and one defensive touchdown to lead the Wildcats to a 38-0 victory over Taylor County (TC) on Wednesday, September 25, at Taylor County High School in Butler, GA.

While SCMS head coach Ernest Scott was pleased with the win and the way the Wildcats ran the ball, he was somewhat concerned about how opposing teams will try to defend the SCMS running attack in the playoffs.

“They (TC) loaded the box on us. It got wide on the toss,” Scott said. “We’ve got to make some adjustments for the next game. The team that we play next is going to hear that and they are going to try to do the same thing. We’re going to have to throw a little bit more and use some dive plays a little bit more.” 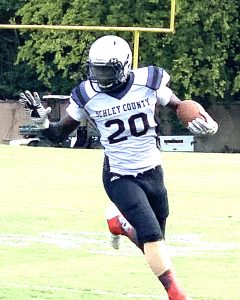 The Wildcats won the toss and elected to receive to begin the game. They wasted no time in putting points on the board as Solomon scored a long rushing touchdown. Jack Clark scored the two-point conversion to put SCMS up 8-0.

Later in the first quarter, Solomon would score his second touchdown of the day on another long run. The Wildcats were able to complete the two-point conversion to give themselves a 16-0 lead. 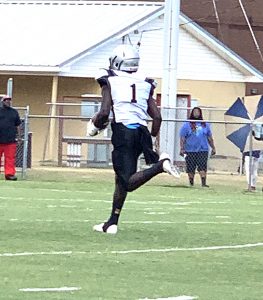 SCMS running back Jalewis Solomon scores the first of his four touchdowns to lead the Wildcats to a 38-0 win over Taylor County.
Photo by Ken Gustafson

During the first half, the Wildcat defense held the Viking offense in check, as TCMS was unable to do much on offense. The Wildcats also forced a turnover on a fumble, getting the ball back for the offense.

In the waning minutes of the first half, Solomon fought through several Viking tacklers to score his third touchdown of the day. The two-point conversion was converted by Zayden Walker to give the Wildcats a 24-0 halftime lead.

The Vikings starting moving the football to start the second half and they thought they were going to have a touchdown on the board. Running back Cam Lawhorn ran the ball 90 yards for a TCMS touchdown. However, a block-in-the-back penalty was called against the Vikings’ David Trower as a he blocked an SCMS defender in the back just before Lawhorn scored. As a result, the touchdown was nullified. 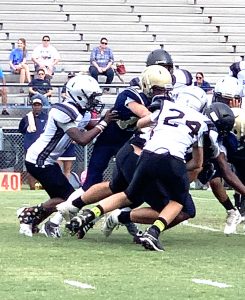 The Vikings, however, were able to move the ball all the way down to the SCMS six-yard line. Unfortunately for TCMS, they turned the ball over again on a fumble. Solomon picked up the loose ball and ran it 94 yards the other way for his fourth touchdown of the day. Walker converted the two-point conversion to give SCMS a 32-0 lead.

Walker would later score a rushing touchdown from five yards out to make the final score 38-0 in favor of SCMS. 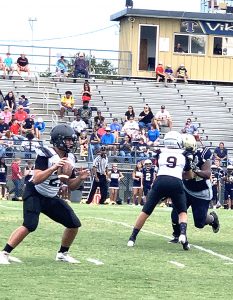 SCMS quarterback Jay Kanazawa is back to pass.
Photo by Ken Gustafson

The Wildcats finish the regular season undefeated at 6-0. They will face either Crawford County Middle School (CCMS) or Greenville Middle School (GMS) in the Region 4-A Middle School Playoffs on Wednesday, October 2, at Schley County High School.