Southland B Team falls to Deerfield-Windsor in defensive struggle 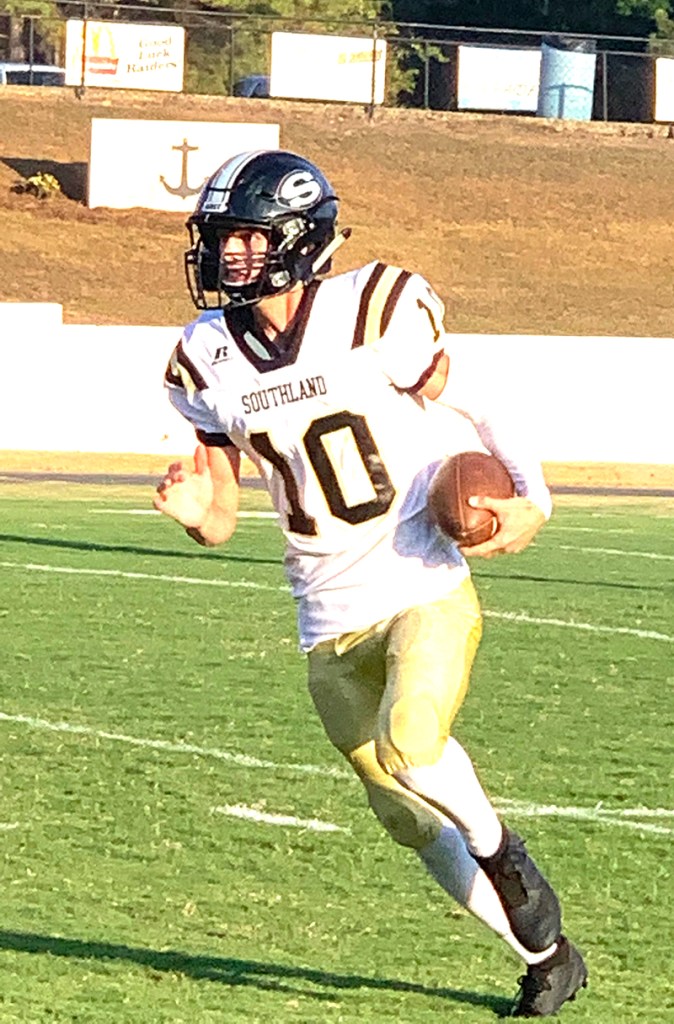 Southland Academy wide receiver Caleb Law scored a two-point conversion and got two interceptions in the SA B team’s 14-8 loss to Deerfield-Windsor. Photo by Ken Gustafson

AMERICUS – For members of the Southland Academy (SA) football B team, it was their last chance this season to impress head varsity football coach Rod Murray and lobby for more playing time on Friday nights. While not a lot of points were scored, the Raiders were impressive on the defensive side of the ball. Unfortunately, a late-game touchdown scored by Deerfield-Windsor (DWS) led to the Raiders’ 14-8 defeat at the hands of the Knights on Thursday, October 10, at Harvey Simpson Stadium on the SA campus.

The Raiders jumped on the board first when running back Landon Griffin scored a rushing touchdown from 15 yards out. The two-point conversion by Caleb Law was good, and SA had an early 8-0 lead. 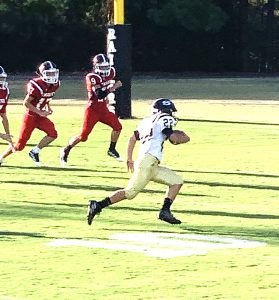 SA running back Landon Griffin scored the Raiders’ only touchdown in the SA B team’s loss to Deerfield-Windsor.
Photo by Ken Gustafson

For the rest of the game, neither offense couldn’t get anything going. This was largely due to the play of both defenses. Late in the first half, SA quarterback Chase Ledger was trying to move the Raiders down the field, but threw an interception to DWS defensive back Reid Martin. The Knights took advantage of the turnover when quarterback Thomas Ray threw a 30-yard touchdown reception to Bo Bennett, cutting the Raiders’ lead to 8-6 just before the half.

Near the end of the third quarter, the Raiders forced a turnover when Law intercepted Ray’s pass.

The Raiders tried to get something going on offense, but were not able to do so and had to punt. The Knights were able to mount a drive all the way down to the SA seven-yard line. A few plays later, Ray threw a completion to Carter Deriso at the one-yard line. 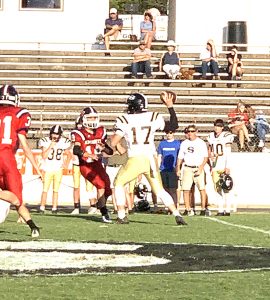 Then on fourth and goal, Ray scored on a quarterback sneak to give the Knights the lead. The Knights decided to go for two. Ray pitched the ball to Garrett Watson, who ran the ball into the end zone to make the score 14-8 DWS with just under three minutes left in the game.

The Raiders tried to mount a comeback with less than a minute, but it was not to be, as the Knights emerged victorious by the score of 14-8. 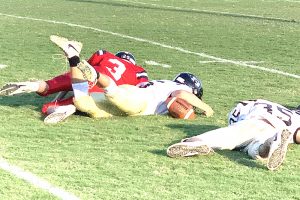 Being that the B team season is over, the players will now join the SA varsity for the rest of the season. The Raiders’ varsity team will play a home game on Friday night, October 11, against the Brookwood School. Kickoff is scheduled for 7:30 p.m.