Americus-Sumter senior runner Rondravious Terry finished in 10th place in a time of 18:24.90 at the Region 1-AAAA meet in Columbus, GA. Photo by Shanika Dyson

COLUMBUS, GA – The Americus-Sumter girls and boys cross country teams competed in the Region 1-AAAA meet on Tuesday, October 22, at Kinnett Stadium in Columbus, GA. The ASHS boys’ team came extremely close to qualifying for the GHSA Class AAAA State Meet as a team, but finished just shy of fourth-place finishers Northside Columbus (NCHS). In the team competition, the top four teams at the region meet go to the state meet.

ASHS senior Rondravious Terry turned in the best finish for the Panthers. Terry finished in 10th place with a time of 18:24.90. The top six individual runners qualify for the state meet. Eleven seconds separated the time turned in by sixth-place finisher Christopher Hunter of Columbus High and Terry’s time. Hunter finished in sixth place with a time of 18:13.57, which was good enough to qualify for the state meet. 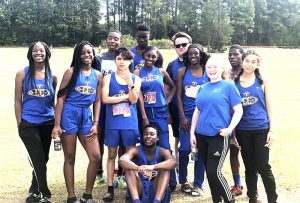 The Americus-Sumter boys and girls cross country teams pose for a final picture after the Region 1-AAAA meet in Columbus, GA.
Photo by Shanka Dyson

In spite of the boys’ team barely missing out on state, ASHS head coach Shanika Dyson was pleased with the effort the team gave, especially the seniors who competed. “We had five seniors to run today and to know that they gave their all in their final run of their final season was bittersweet,” Dyson said.

The next Panther to cross the finish line was senior Wallace Bradley. Bradley, who is a guard on the ASHS boys’ basketball team, finished in 23rd place out of 60 competitors in a time of 19:31.66. Senior Jaylen Mable was the next ASHS runner to cross. Mable finished the race in a time of 19:51.29. 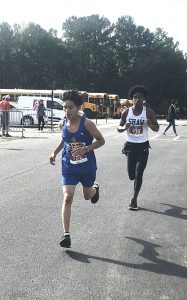 The next Panther runner to cross the finish line was senior Bobby Duque. Duque turned in a solid performance, finishing in a time of 20:26.86. Senior Terrende Rush crossed the line in a time of 22:46.89, followed by James Shopen-Davis, who ran his personal best time (33:57.74).

The ASHS girls’ team also came close to qualifying for the state meet, but finished in sixth place, two spots outside of the top four. The Lady Panthers finished with a total time of 2:42:22.77 and with 181 points.

Selliyah Owens was the first Lady Panther to cross the finish line. Owens finished in a time of 28:43.81. What made Owens’s finish even more impressive was that she was recovering from a respiratory infection. Dyson said that Owens is looking forward to leading the Lady Panthers next season. 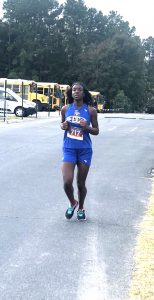 Americus-Sumter female athlete Selliyah Owens turned in a strong performance in the Region 1-AAAA meet. Owens finished the race in a time of 28:43.81.
Photo by Shanika Dyson

Owens’ teammate, Emely Jimenez, finished right behind Owens in a time of 30:02.89. Teigan Pepito finished two spots behind Jiminez in a time of 32:27.22. Lakyra Waters turned in a strong performance, finishing in a time of 33:20.97. Waters was followed by Makayla Clark, who finished in a time of 37:47.88.

“The runners performed well today. Their times were just a bit short of their season or personal bests this year, which was a little disappointing,” Dyson said. “I could tell all the runners gave 100 percent in their races.” Dyson went on to say that her favorite moment in the meet is when James Shopen-Davis, who was the last runner to cross the finish line in the boys’ race, finished with a new personal best time (33:57.74).