Hurricanes lose at home to No. 15 Francis Marion 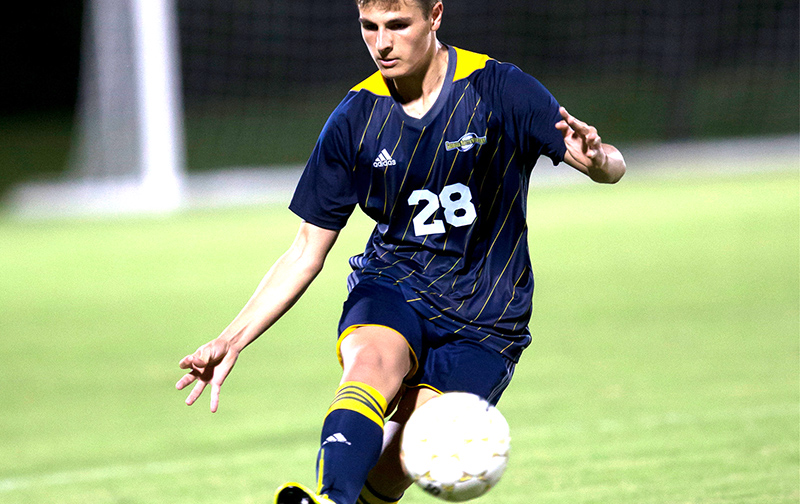 GSW freshman forward Sebastian Da Silva had two shots on goal during the Hurricanes’ 2-0 loss to Francis Marion University. Da Silva has one goal and two assists on the season. Photo by Arthur Thompson

AMERICUS, GA – The Georgia Southwestern State University men’s soccer team (4-8, 0-4 PBC) was hoping to pull off a major upset when they hosted 15th-ranked Francis Marion University (FMU) on Saturday, October 26, at Hurricane Field. However, a goal by the Patriots in the sixth minute and one in the 85th minute would prove to be enough to defeat the Hurricanes 2-0 and keep them winless in the Peach Belt Conference (PBC).

The Patriots won their fifth consecutive match to improve their record to 10-2-1 and 3-1 in the PBC. With the loss, the Hurricanes fall to 4-8 overall and are still winless in the PBC at 0-4.

FMU’s leading scorer, Javier Bello, put the Patriots on the board early when he headed in a cross in the sixth minute for his sixth goal of the season.

FMU added to its lead with five minutes left in the match when Jafet Santiago was the beneficiary of a friendly deflection off his hard kick from outside the 18-yard box.

The Hurricanes will try again to earn that elusive first PBC victory when they travel to Greenwood, SC on Saturday, November 2, to take on another tough conference opponent: the Bearcats of Lander University. Kickoff is scheduled for 7 p.m.