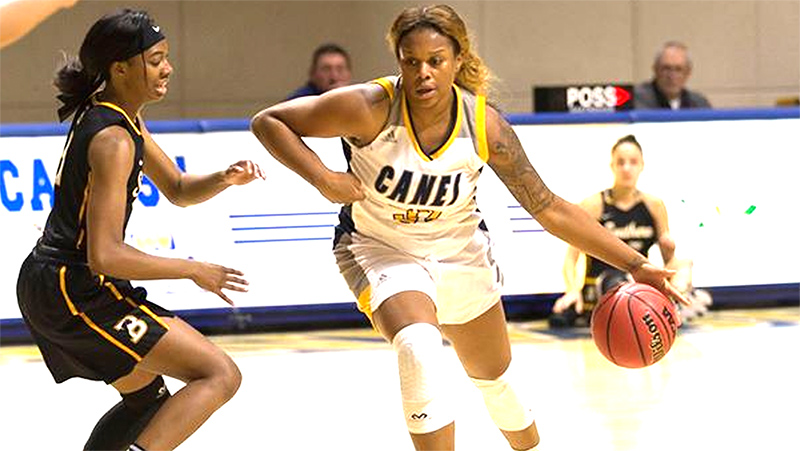 GSW junior forward Dominique Jeffery scored 21 points to lead the Lady Hurricanes to an 81-66 victory over Albany State in the PBC/SIAC Challenge in Columbus, GA. Photo by Arthur Thompson

COLUMBUS, GA – After a nail-biting 72-71 win over Fort Valley State on Friday, November 15, the Georgia Southwestern State University women’s basketball team earned an 81-66 victory over Albany State in the final game of the PBC/SIAC Challenge on Saturday, November 16, at the Lumpkin Center in Columbus, GA.

Jeffery started the game strong, scoring the Lady Hurricanes’ first six points of the game. However, the Golden Rams took a 7-6 lead on a layup by Breanna Wilson. Later on, Ciera Norman increased ASU’s lead to four on a three-pointer before both teams went scoreless for the next three minutes. Mariya Trimble ended GSW’s scoring drought with a layup. That basket was the beginning of a 10-2 run by the Lady Hurricanes, which gave them a 16-12 lead by the end of the first quarter.

In the second quarter, the Lady Hurricanes went on a 15-4 run, which began with a three-pointer by Madison Johnson. By halftime, GSW had a 39-28 lead.

To begin the second half, GSW went on a 9-0 run, including a three-pointer by Samuel. This pushed the GSW lead up to 15 points midway through the third quarter. By the end of the quarter, The Lady Hurricanes enjoyed a 62-45 lead.

GSW (3-0) drained nine three-pointers on the night and finished the game shooting 41.2 from the field. ASU made six three-pointers, but shot only 39 percent from the field. The Golden Rams outrebounded GSW 43-37, but the Lady Hurricanes were able to force 26 turnovers, which led to 25 points off those turnovers.

Norman led the Golden Rams with 14 points and seven rebounds.

The Lady Hurricanes will try to improve to 4-0 when they host Middle Georgia State on Tuesday, November 20, at 7 p.m.