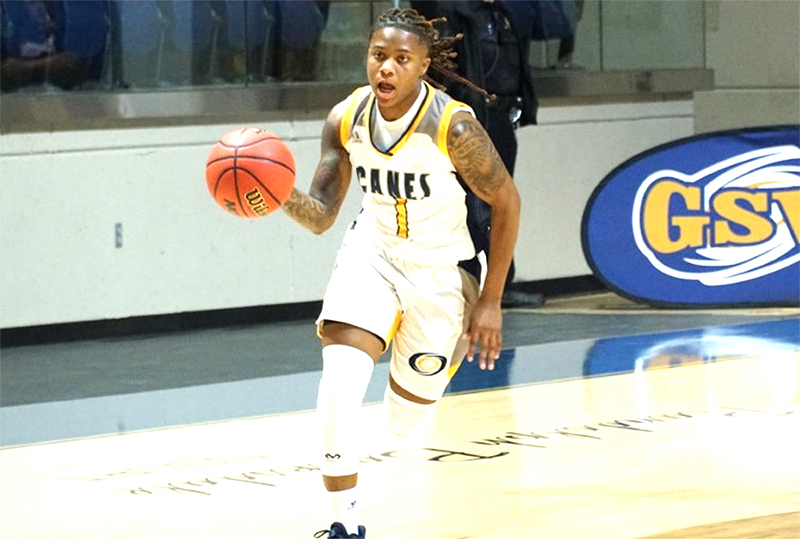 GSW sophomore guard Lex Chatman scored 21 points to lead the Lady Hurricanes to an 80-65 victory over Middle Georgia State. GSW is now 4-0 on the season. This is the first time since the 2014-15 season that the Lady Hurricanes have started out 4-0. Photo by Arthur Thompson

For the first time since the 2014-15 season, the Lady Hurricanes have started out the season at 4-0.

After trailing by two points at the half, GSW finished strong with back-to-back 20-plus quarters. The Lady Hurricanes also got the job done on the defensive end of the floor as they forced MGS into committing 26 turnovers on the night.

Chatman scored her only points of the first half on a layup as GSW took an early 6-0 lead. The Knights got on the board when Aliyah Thomas cut the lead in half on a three-pointer. However, Madison Johnson responded for GSW with a three-pointer of her own to push the Lady Hurricanes’ lead back up to six at 9-3.

The Knights responded with three-pointers by Thomas and Joy Sadler and were able to tie the ball game at 11-11 with 6:37 left in the first quarter.

GSW went on a run to take a six-point lead, but MGS was able to pull to within two points at 21-19 by the end of the first quarter.

The Lady Hurricanes regained a six-point advantage early in the second quarter, but the Knights refused to go away. With 5:14 to go in the half, Breanna Walker had a chance to tie the game for the Knights, but only made one of two free throws. At that point, GSW maintained a 28-27 lead.

However, with 1:43 left in the first half, the Knights were able to tie the ball game at 32-32 as Thomas nailed another three-pointer. Dominique Jeffery gave the Lady Hurricanes the lead just before the half ended and GSW enjoyed a 34-32 halftime lead.

MGS went on a 4-0 run to take their first lead of the game at 36-34. The Knights increased their lead to 40-34 before GSW senior Kayla Smith ended the Lady Hurricanes’ scoring drought. GSW then outscored MGS 8-4 over the next three minutes on two three-pointers by Chatman to tie the game at 44-44. Shortly thereafter, Mariya Trimble gave the Lady Hurricanes the lead on a layup, which led to a timeout by the Knights with 3:18 to go in the third quarter.

During the remaining minutes of the third quarter, the Lady Hurricanes went on an 11-3 run, capped off by a three-pointer from Johnson, to take a 57-47 lead. By the time the fourth quarter began, GSW had a 12-point advantage.

During the fourth quarter, Chatman and Johnson combined for 19 points and Tamecia Blue chipped in a layup. The three players combined to score all of GSW’s 21 points in the final quarter. As a result, the Lady Hurricanes had their largest lead of the game at 16 points and went on to win 80-65.

Sadler finished with a double double for MGS. She scored 25 points and hauled down 12 rebounds. With the loss, the Knights drop to 4-2 on the season.

The Lady Hurricanes will try to stay undefeated when they travel to Valdosta, GA for the VSU Thanksgiving Tournament Friday and Saturday, November 29-30. They will take on Valdosta State on Friday at 7 p.m., followed by a game against Eckerd College on Saturday at 6 p.m.