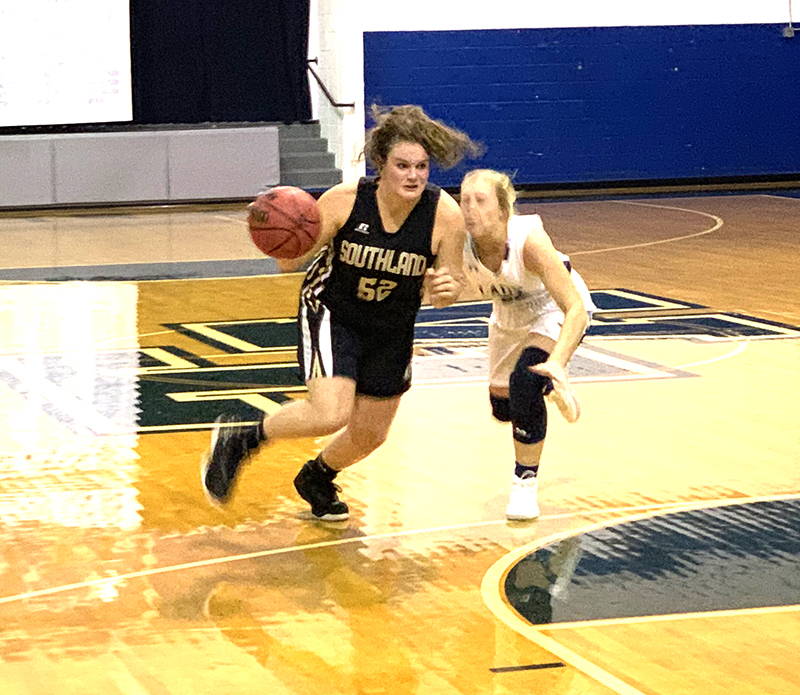 Southland Academy’s Holly McCain pushes the ball up the court against SGA in the Lady Raiders’ first game of the season. Photo by Ken Gustafson

DAWSON, GA – The Southland Academy Lady Raider basketball team (SA) jumped out to a 13-0 lead early in the first quarter and continued to dominate on their way to a 37-19 victory over Southwest Georgia Academy (SGA) in their season opener at the Terrell Tip-off Tournament on Monday, November 25, at Terrell Academy in Dawson, GA.

AS it was with SA last year, the same is true this year. It starts with defense.

“Were going to have to play great defense,” SA head coach Ty Kinslow said. “We don’t have those six footers in there anymore so we’ve got to get even better with our defense. Our defense sets the tone…getting it out and making some easy buckets early.”

Haleigh Warren led the Lady Raiders with 13 points and Riley Mitchell chipped in nine in the winning cause.

SA began the game as they had done just about every game a year ago. They used their tenacious defense to create turnovers and turn them into points. The Lady Raiders jumped out to a 13-0 lead on SGA, capped off with a layup by Morgan Weaver.

The Lady Raiders went through a bit of a scoring drought early in the second quarter, but increased their lead to 18-3 on a steal and breakaway layup by Weaver. 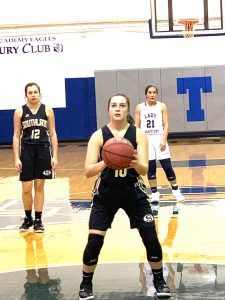 With 2:55 to go in the first half, Warren nailed a three-pointer to put the Lady Raiders up 21-3. SA continued to maintain a strong defensive posture, which made it difficult for the Lady Warriors to score. By halftime, SA maintained a 22-5 lead.

The second half began the same way as the beginning of the game did. SA went on a 9-2 run in the third quarter to take a 31-7 lead with three minutes to go before the final eight minutes. SGA began the second half in a full-court press, but the Lady Raiders were able to break that press and scored points. Near the end of the third quarter, SGA scored four unanswered points, but by the end of the quarter, SA still maintained a double-digit lead at 33-13.

In spite of the big lead, the Lady Raiders struggled with turning the ball over at times. However, their defensive effort made up for those miscues on offense. The Lady Warriors were unable to take advantage of SA’s turnovers due to the fact that they struggled with turnovers themselves.

There was very little scoring in the fourth quarter, but the Lady Raiders (1-0) had done the damage early on and won by the score of 37-19.

Up next for SA is a game against Citizens Christian in the Terrell Tip-off Tournament on Tuesday, November 26, at 5:30 p.m.