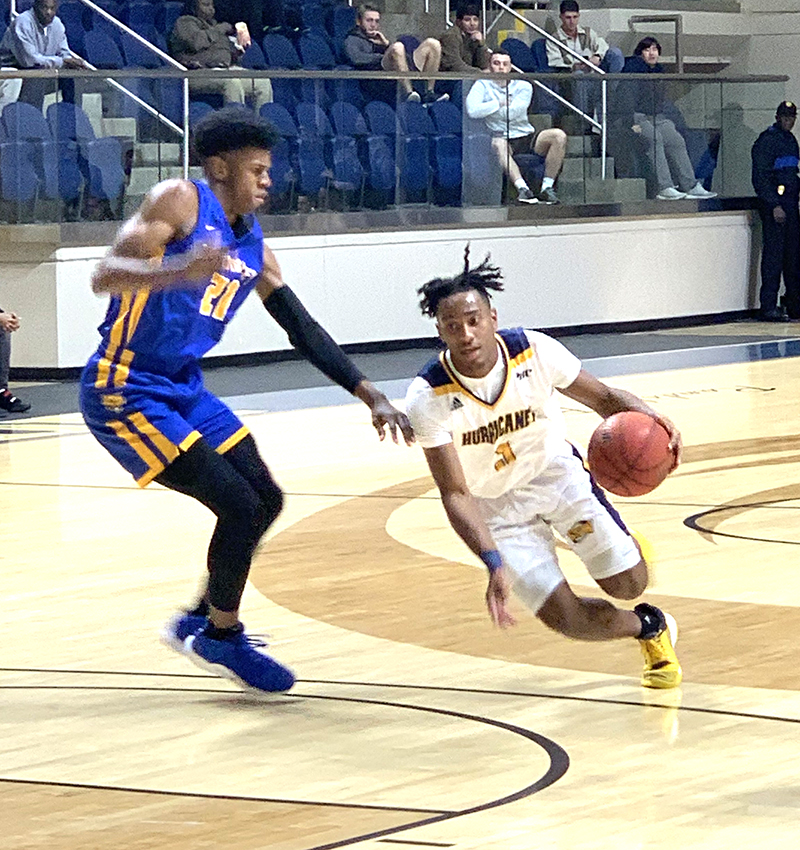 GSW junior guard Soloman Thomas drives to the basket. Thomas scored 31 points, including eight three-pointers, to lead the Hurricanes to an 89-62 win over Fort Valley State. Photo by Ken Gustafson

With the win, the Hurricanes stay undefeated on the season at 5-0, while FVSU drops to 2-6.

This game was a much different outcome than the first meeting that these two teams had back on Tuesday, November 12. In that first meeting, the Hurricanes earned a hard-fought 72-68 victory over the Wildcats in Fort Valley, GA to begin the 2019-2020 season.

“It’s good to see us shooting the ball well,” GSW head coach Aaron Coombs said. “If you had asked me a month ago after our first couple of exhibitions, I would have thought that would be tough. Soloman got us going and had another great performance. I’m happy for our guys. I’m happy for our fans and I’m happy for the school. To be 5-0, it’s where we wanted to be on the schedule. Not a lot of people thought that we would be 5-0, but the fact of the matter is these kids are playing hard. Winning is contagious and they’re starting to feed off that. It’s a good feeling.” 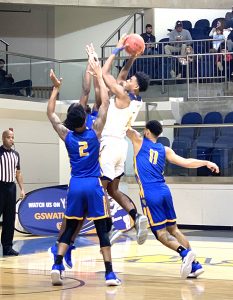 GSW sophomore forward Jamari Dean gets an offensive rebound and goes up to score. Dean scored 20 points in the win over FVSU.
Photo by Ken Gustafson

The Hurricanes also got it done on the defensive end. They were able to score 25 points off 22 turnovers committed by the Wildcats. GSW also scored 22 fast-break points and outscored FVSU 34-22 in points in the paint.

The Hurricanes jumped out to an early 11-4 lead, capped off with a three-pointer by Thomas. The Wildcats responded by going on an 8-5 run, cutting the Hurricanes’ lead to five. However, GSW responded with an 8-0 run, which included two more three-pointers by Thomas. By the 11:37 mark of the first half, GSW led 25-12.

The Hurricanes continued to maintain their double-digit lead as Thomas buried another three-pointer to give GSW a 36-23 lead with 3:32 to go before halftime.

About 30 seconds later, Thomas nailed another three-pointer to increase the GSW lead to 41-25.

The Wildcats got a steal and a basket from K’Viontae Williams, but the Hurricanes countered with a basket by Dean to give GSW a 43-27 lead. 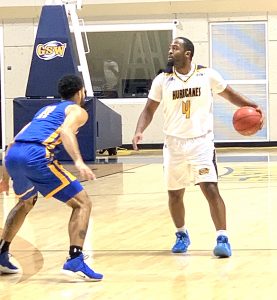 Thomas then showed that he not only could shoot the ball, but pass it as well. He drove to the basket and kicked the ball out to Kahlon Whitley in the right corner, who promptly nailed a three-pointer. This was part of an 8-4 run by GSW to close out the first half. By halftime, the Hurricanes had a commanding 49-29 lead.

For the remainder of the game, the Hurricanes were able to maintain their lead of 20 points or more as the Wildcats continued to struggle against the GSW defense.

With less than seven minutes to go, GSW went to a full-court press and created turnovers, which led to points. By the 6:30 mark of the second half, GSW led 78-49.

FVSU was not able to make a serious run to get back in the game. As a result, the Hurricanes won comfortably by the score of 89-62.

Up next for the Hurricanes is a rematch against Albany State in Albany, GA on Thursday, December 5. The last time these two teams met, GSW won 75-66 in the Storm Dome on Monday, November 18. Tip off for Thursday’s game is scheduled for 7:30 p.m.