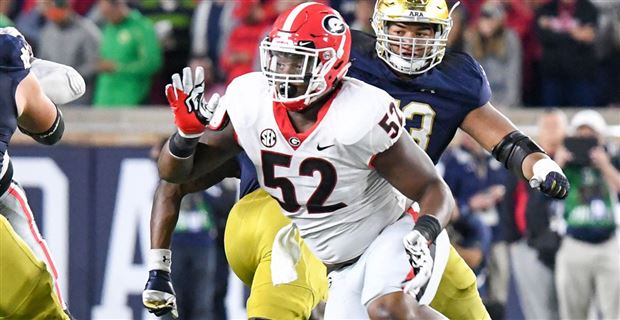 What makes this day a bit unique is that two former Americus-Sumter (ASHS) football players, Tyler Clark and Kobe Lewis, will be trying to lead their teams to conference championships on the same day.

Clark is currently a senior defensive lineman at the University of Georgia (UGA) and Lewis is a sophomore running back at Central Michigan University (CMU). It just so happens that both of those teams will be competing for their respective conference championships today.

Clark will try to do his part to help the Bulldogs (11-1) get to the CFP when they take on undefeated LSU (12-0) in the SEC Championship this afternoon at 4 p.m. on CBS.

For Clark, this is not the first time that he has competed for the SEC Championship. Two years ago as a sophomore, he helped lead the Bulldogs to a victory over Auburn in the 2017 SEC Championship and a berth in the CFP.

Clark has had a stellar senior year for the Bulldogs. According to information at www.georgiadogs.com, Clark has started all 12 games and leads all interior linemen with 24 total stops, including 2.5 sacks and a team-high eight tackles for loss.

He also has seven quarterback pressures and a tackle for a four-yard loss in UGA’s overtime loss to South Carolina. In addition to those successes, Clark made a huge defensive play in the Bulldogs’ win over Texas A&M. Clark will have a chance to win another SEC title today. If the Bulldogs can succeed, Clark will once again compete for UGA in the CFP and possibly for a national championship. 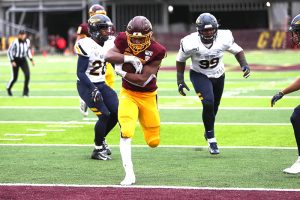 Former Americus-Sumter and current CMU sophomore running back Kobe Lewis will try to help the Chippewas win the Mid-America Conference (MAC) Championship against Miami (OH). This year, Lewis has rushed for 953 net yards on 170 carries and has scored 11 touchdowns.
Photo by CMU Athletic Department

Kobe Lewis was an outstanding player at ASHS as well. According to information at www.cmuchippewas.com, Lewis was named the Region 1-AAAA Player of the Year and rushed for 1,734 yards during his senior year. He also finished that year with 204 yards in receptions and scored 25 touchdowns. Lewis also got it done on the defensive side of the ball for the Panthers in 2017, tallying 14 solo tackles and two interceptions. Several schools recruited Lewis and it came down to either CMU or Georgia State, but Lewis chose to play for the Chippewas.

During his freshman year at CMU, Lewis appeared in all 12 games and carried the ball 10 times for 37 yards. This past season, Lewis carried the ball a whole lot more. So far, he has rushed for 953 net yards on 170 carries and has scored 11 touchdowns.

Lewis and the Chippewas (8-4) will be competing for the Mid-America Conference (MAC) Championship against the 7-5 Red Hawks of Miami (OH) today at noon on ESPN2.

It isn’t often that two of our hometown heroes are competing for championships on the same day, but today, that is the case. Hopefully, by the time the sun sets on Saturday, December 7, both Clark and Lewis can call themselves conference champions.