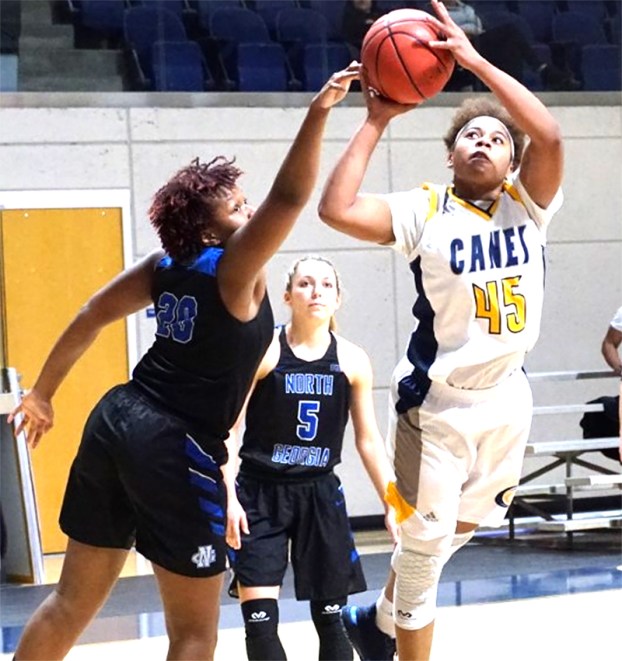 Lady Hurricanes fall to No. 10 North Georgia in hard-fought contest

AMERICUS – Despite tying the game twice during the fourth quarter, the Georgia Southwestern State University women’s basketball team (GSW) was unable to regain the lead and fell to No. 10 North Georgia (UNG) 61-51 on Wednesday, January 8, at the Storm Dome on Southland Academy Night.

GSW held UNG to one of their lowest scoring totals of the season during Wednesday’s Peach Belt Conference game as the Lady Hurricane defense forced 17 turnovers.

The game got off to a slow start as both teams had trouble scoring. However, two minutes into the game, UNG’s Imani Arnold was able to put the Lady Nighthawks on the board 1-0 after a late foul. GSW responded as Tamecia Blue scored on a layup with 6:07 remaining in the first quarter, giving the Lady Hurricanes an early a 2-1 lead. K’Shouri Hodge added a put back and Lex Chatman scored off a fast break to give GSW a 6-1 lead. However, UNG finished the quarter with a 7-0 run to take an 8-6 lead.

GSW (4-6, 0-4 PBC) never felt like they were out the game as they cut the score down to 25-22 early in the second half. The Lady Nighthawks tried to pull away again, but Madison Johnson wouldn’t allow it. Johnson went on a run of her own as she scored seven points to tie the game and gave GSW a 32-31 lead after she converted a three-point play. However, UNG (12-1, 5-0 PBC) got the lead back and went into the fourth quarter leading 39-37.

GSW’s Mariya Trimble scored to tie the game at 39-39. Blue followed that up with a free throw to give the Lady Hurricanes the lead with 9:08 remaining in the contest. 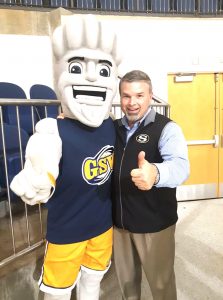 Johnson came off the bench and led the Lady Hurricanes with 15 points and two assists, followed by Chatman, who finished with nine points and a team-high 11 rebounds. Both Trimble and Blue finished with eight points each and Trimble picked up five steals and six rebounds to end the night.

UNG was led in scoring by Kyra Davis with 15 points. Abbie Franklin drained four three-pointers as she had 13 points, while Julianne Sutton posted a double-double with 12 points and 11 rebounds.

The Lady Hurricanes will try to stop their six-game losing streak when they travel to St. Augustine, FL to take on Flagler College in another Peach Belt Conference contest on Saturday, January 11. Tip off is scheduled for 1:30 p.m.

Lady Hurricanes fall to No. 10 North Georgia in hard-fought contest

From Staff Reports   AMERICUS – Despite tying the game twice during the fourth quarter, the Georgia Southwestern State University... read more