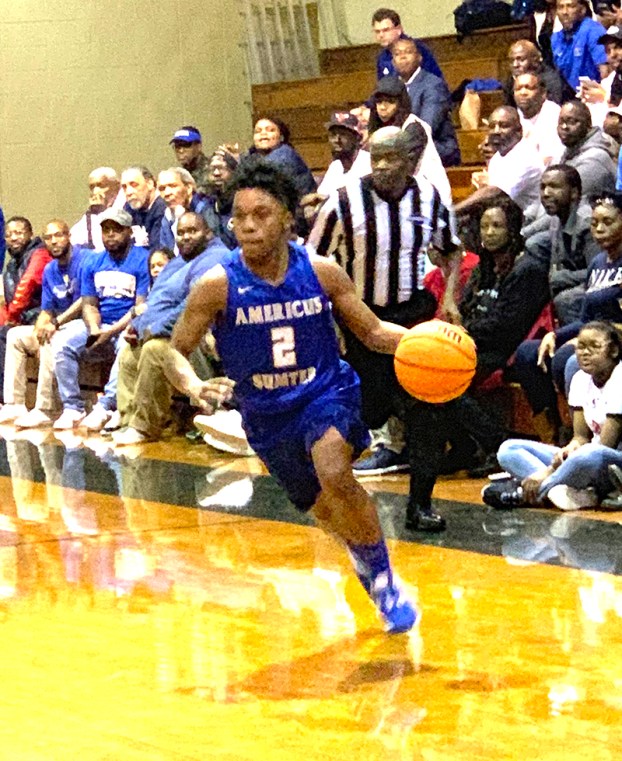 Americus-Sumter senior guard Melton McCoy advances the ball up the court against Westover. McCoy scored six points in the win over the Patriots. Photo by Ken Gustafson

ALBANY – After defeating Carver (Columbus) in dominating fashion the day before, the Americus-Sumter High School boys’ basketball team (ASHS) faced a much tougher opponent in the Patriots of Westover (WHS). However, thanks to some key defensive plays and clutch free throw shooting down the stretch, the Panthers were able to earn a hard-fought 45-39 victory over the Patriots on Saturday, January 11, at Westover High School.

With the win, ASHS remains undefeated at 16-0 on the season and is a top the Region 1-AAAA standings at 8-0. With the loss, the Patriots fall to 8-6 overall and suffered their first Region 1-AAAA loss (6-1).

ASHS senior guard Trae Brown led the Panthers in scoring with 17 points and both senior guard Wallace Bradley and junior guard Jordan Wiley each chipped in seven points in the winning cause.

The Patriots jumped out to an 8-2 lead to start the game, but the Panthers fought their way back into the game, beginning with a three-pointer from senior shooting guard Le’Shanna Ross. WHS responded by going up 14-9 by the start of the second quarter, but that is when ASHS responded with a vengeance. The Panthers forced several turnovers and scored eight unanswered points to take a 17-14 lead. During that sequence, Brown, Wiley and senior guard Melton McCoy all scored transition layups. Then with just a few minutes left in the first half, Brown took over with his hot three-point shooting. He knocked down two straight three-pointers to help give the Panthers a 30-18 lead by halftime.

Brown scored 13 of his game-high 17 points in the second quarter.

For the first five minutes of the third quarter, there was very little scoring from either team. The Patriots worked their half-court offense to try to find high-percentage shots, but hurt themselves with unforced turnovers. The Panthers struggled on the offensive end as well, but still led 34-27 with time winding down. However, with just a few seconds left in the third quarter, the Patriots got a steal and a basket from Shawntavious Davis to cut their deficit to 34-29 by the start of the final quarter.

The fourth quarter was not a high-scoring quarter either. One reason for that was the Panthers’ willingness to stall and run clock on one of their possessions. However, with ASHS leading 36-33 with a little over two minutes to play, senior guard A’Jarrean Banks drove to the basket and scored to give the Panthers a 38-33 lead. However, with 45.7 seconds to go and ASHS leading 40-34, Zachery Payton knocked down a three-pointer to pull WHS to within three at 40-37. The Panthers responded as Bradley got fouled at the other end and sank both free throws to put ASHS up by five.

Down the stretch, the Panthers were able to get a couple of steals and made enough free throws to hold off the Patriots and stay undefeated on the season.