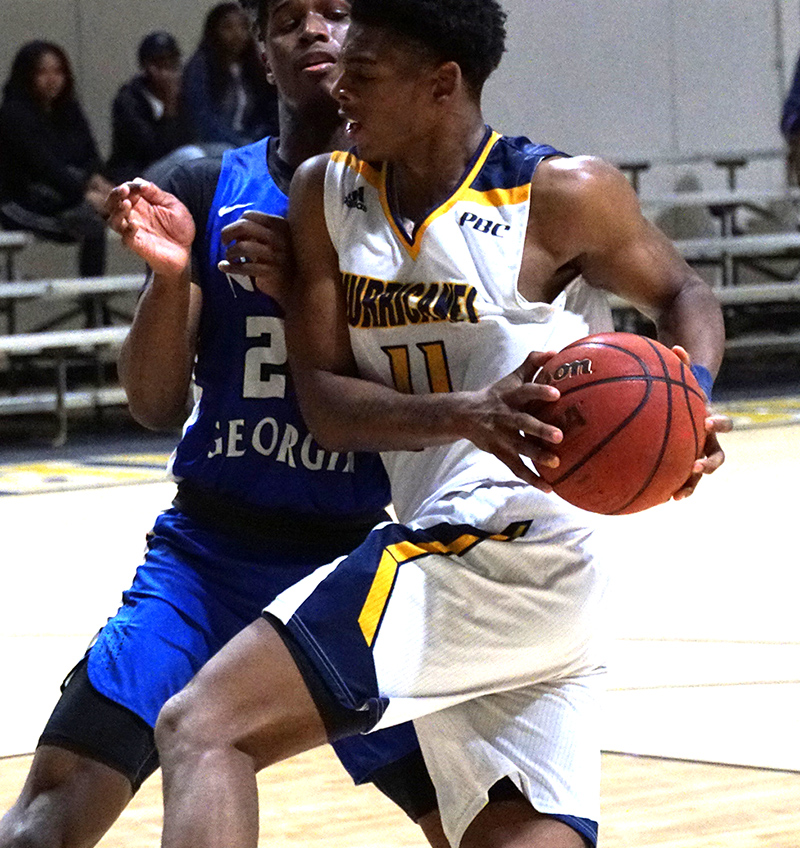 GSW sophomore forward Jamari Dean (11) posted his fifth double-double of the season (21 points, 12 rebounds) against North Georgia and scored 17 points in the loss at Flagler College. Photo by Chris Lind

AMERICUS, GA – A pair of second-half breakdowns led to back-to-back losses for the Georgia Southwestern State University men’s basketball team this week. GSW suffered its first home loss of the season on Wednesday, January 8, when the University of North Georgia (UNG) erased a seven-point deficit in the final two and a half minutes to force overtime and went on to defeat the Hurricanes 72-65. On Saturday, January 11, a tied game at halftime turned into a one-sided affair as the Flagler College Saints defeated GSW 109-77 in St. Augustine, FL.

The Hurricanes exit the weekend with a 6-5 overall record and a 1-4 mark in the Peach Belt Conference (PBC).

In the loss to UNG, the Hurricanes held a five-point advantage at halftime, but were unable to pull away from the Nighthawks. GSW’s largest lead of the evening came with 17:20 to play when Jamari Dean knocked down a jumper to put the Hurricanes up by eight points, 34-26.

North Georgia (6-7 overall, 1-4 PBC) controlled the next 10 minutes and took a 47-45 lead. After the teams exchanged timeouts, GSW rattled off nine unanswered points and led 54-47 with 2:29 remaining.

However, the Hurricanes turned the ball over on their next possession and missed their only shot opportunity on the next trip down the floor. Dean slammed home a dunk to keep it a 56-51 lead with 44 seconds to go, but a pair of missed free throws by GSW opened the door for UNG’s heroics.

The Nighthawks capitalized on their chance to force overtime by draining a three-pointer from the right corner with 17 seconds left. Despite having the ball last in regulation with time to set up a play, the Hurricanes were unable to get a clean look and the game would go into overtime.

UNG opened the overtime period with a three-pointer and the final result was never in question the rest of the way.

Ephraim Tshimanga scored 17 points and pulled down nine rebounds to lead the Nighthawks. UNG received strong bench contributions from Zezmon Steeple and K.J. Jenkins as both chipped in 16 points.

Soloman Thomas led the Hurricanes in scoring against the Saints with 18 points. GSW had four of its five starters score in double figures as Dean dropped 17, Kahlon Whitley added 16 and Dial scored 11. Whitley fell just shy of his first double-double as he dished out nine assists.

Flagler was led in scoring by Damir Hadzic, who came off the bench and made 11 of 12 shots over his 22 minutes on the floor en route to a 24-point afternoon.

The Hurricanes will try to stop this current two-game losing streak when they return home to host Clayton State (2-10, 0-5 PBC) on Wednesday, January 15, at 7:30 p.m. on Junior Service League Night.