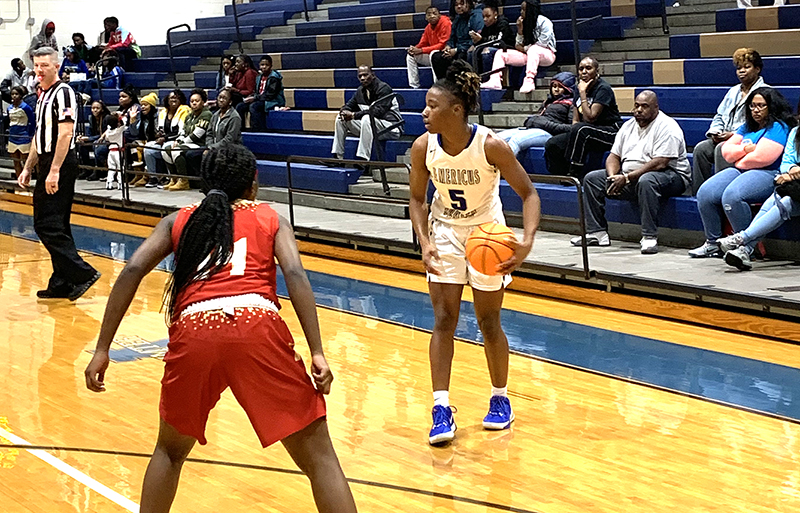 AMERICUS – After the Americus-Sumter Lady Panther Basketball Team (ASHS) suffered its first loss of the season in a 54-46 defeat at Carver (Columbus) on Saturday, January 18, the Lady Panthers were able to refocus and got themselves back on track with dominating wins over Monroe (69-22) and Cairo (69-47). They continued their dominating play with another Region 1-AAAA victory over Hardaway (HHS) by the score of 66-43 on Friday, January 24, at the ASHS gymnasium.

ASHS Head Coach Sherry Harris has been out all week with the Flu and Assistant Coach Teira Wallace has been handling the coaching duties in her stead.

“I think we came out with a lot of energy. It’s kinda easy to do at the home gym, but we still need to continue to work on our half-court offense,” Wallace said.

With the win, ASHS improves its record to 20-1 overall and 12-1 in the Region 1-AAAA standings. 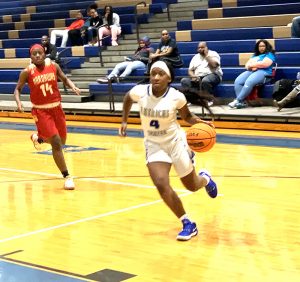 Like most of their games during the season, the Lady Panthers jumped out to a big lead early in the first quarter. ASHS jumped out to an 11-0 lead, which was capped off with a layup by senior forward Brianna Pope. They used their suffocating full-court defensive pressure to force turnovers and turned them into points. The Lady Hawks were held scoreless until the 3:05 mark of the first quarter when Jimia Cobb knocked down a three-pointer. That brought some life to HHS, but the Lady Panthers still led 20-10 at the end of the quarter.

ASHS went on an 8-3 run during the first few minutes of the second quarter. Later on with 4:01 to go, Jones nailed a three-pointer to put the Lady Panthers up by 16 at 31-15. The Lady Hawks tried to stay within striking distance, but that task was made difficult due to the fact that the Lady Panthers continued to score on the inside and kept up their defensive intensity. The Lady Hawks tried to score from the outside, but were unable to hit their shots. By halftime, ASHS was firmly in control, leading 41-20.

Reese scored 16 of her game-high 26 points in the first half. 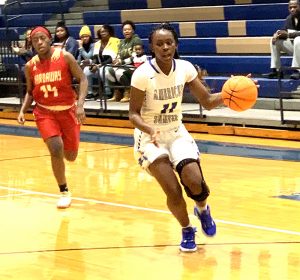 make a significant move to get back in the game and ASHS was able to cruise to a 66-43 victory.

While the Lady Panthers were able to win rather easily, they still continued to struggle from the foul line in the second half. For the game, ASHS only made seven of 28 foul shots. 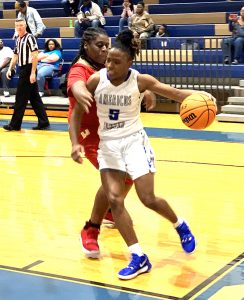 Jelissa Reese drives past her defender on the baseline.
Photo by Ken Gustafson

Deyanna McKinney led the HHS in scoring with 11 points. With the loss, the Lady Hawks drop to 7-14 overall and 5-9 in the Region 1-AAAA standings.

Up next for the Lady Panthers is another region home game against Columbus on Saturday, January 25, at 6 p.m.